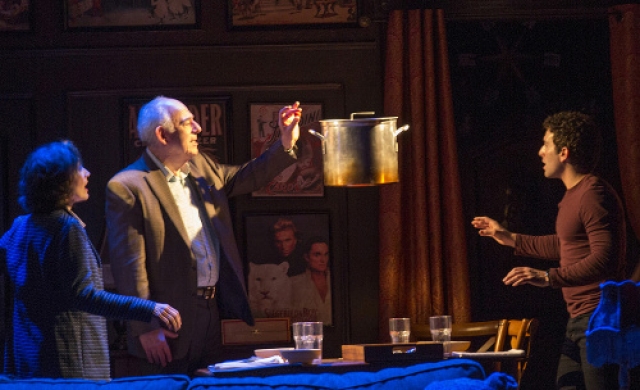 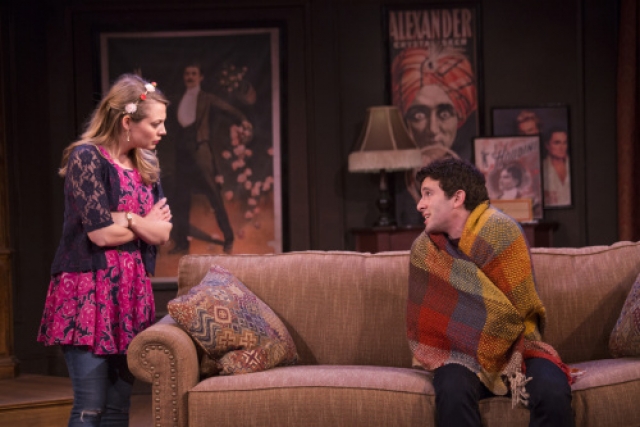 On a Saturday night the St. Germain Stage of Barrington Stage Company was sold out for a world premiere musical Presto Change-O.

It is challenging and bold that the company is launching the season with a commissioned work. On many levels, given the credits of the creators and players, this is an all star production. Broadway veterans are holding down key slots in this intimate, indeed magical musical.

There is an abundance of riches and gems to polish and embellish in what clearly is a work in progress. In a mostly enjoyable and entertaining evening it enchants in its current iteration but needs to be trimmed and sharpened.

When the cast are engaged in feats of magic it's great fun and time flies. There is the predictable sense of how did they do that?  During passages of plot exposition, particularly the enervating chemistry of potential lovers Tina (Jenni Barber) and Michael (Jarrod Spector), the pace slows and we crave more magic.

Cutting a few songs and shortening the running time might give the musical the boost it needs to move on to other productions. This is a musical that may well make the rounds Off Broadway and in regional theatres.

The kick is that the cast has to work brutally hard to master all of the tricks and illusions created and coached by Joseph Wartnercheney. It's the tough part for the actors but tons of fun for the audience.

Pushing out from the curtains Sheldon (Lenny Wolpe) is a senior who is losing his marbles. A little red ball actually. He performs one of the oldest illusions the cups and ball trick which appears to have been invented in Ancient Egypt and passed along through many scams. You might know it as a version of three-card monte hooking rubes and cheating them of their money on the street corners of NY.

With a puff of smoke, the standard smoke and mirrors of the trade, Lance (Michael Rupert), pops out in a vintage, rock star, red leather jacket and shades. He's strictly Vegas baby but we learn that Lance has been a recluse for the past dozen years.

When the curtain parts we see his den a clutter of posters and memorabilia succinctly and richly designed by Derek McLane. It is tended to by an assistant Tina (Jenni Barber). In the banter  between them it is not quite clear what her role is. As a character she is a bit of a conundrum and needs more definition.

The terrible costume by Alejo Vitti doesn't help. Barber is pretty and cute, perky with a resemblance to a young Goldie Hawn. She is dressed in a mish mash outfit of a frumpy lacey sweater and floral skirt over jeans with holes in the knees. Most of the other costumes are drab and generic but Vitti ratchets it up for a campy show biz finale and production number.

Lance is working on a comeback but we learn that he's not a nice guy. He stole the shadow trick from his son Michael. It wowed audiences but prompted Michael to post on line all of the mechanics of his dad's tricks. As a consequence the kid is banished for life from performing magic. Instead he has developed feats of endurance such as three days encased in a block of ice.

Following which, with a long and convoluted story we will spare you the details, he has broken into his father's house. There is an interaction with Tina who attempts to hide him while Michael thaws out from his frigid act.

There is also an ex wife and former assistant Mary (Barbara Walsh) now a suburban realtor and care provider to her incontinent father Sheldon.

Eventually, this sorcerer's stew concocts into a mishegoss. Added to illusion, the family trade, it seems that Michael is also a master of deception. All these shenanigans have been a stunt to get the family back together.

There is another element when Uncle Arthur, also a magician, bounces in. Dressed in year round Hawaiian shirts and a straw hat with which he performs stunts he is working the latest scam. He pitches reuniting the family for a magic act on a cruise ship. They can fine tune for a shot at Vegas.

Or so it would seem. There are a couple of plot points and reversals that nix that. But by the end they are united. Lance, it seems, may not be such a putz after all.

There are individual songs for each of the roles as well as some complex ensemble pieces. They are accompanied by a five piece band led by music director Vadim Feichtner.

The title song "Presto Change-O" by Mary is particularly stunning. The opener "One, Two, Three" by Sheldon, Lance and Michael got things started briskly.  "Block of Ice" with Michael and Tina was poignant while their ertsatz love song "If I Were Magic" didn't click.

The ensemble finale "Who Would Believe" is a knockout. It sent us home with a smile on our face and joy in our heart. Hey, what more can you want for an evening of theatre?