Shrek The Musical Near Miami 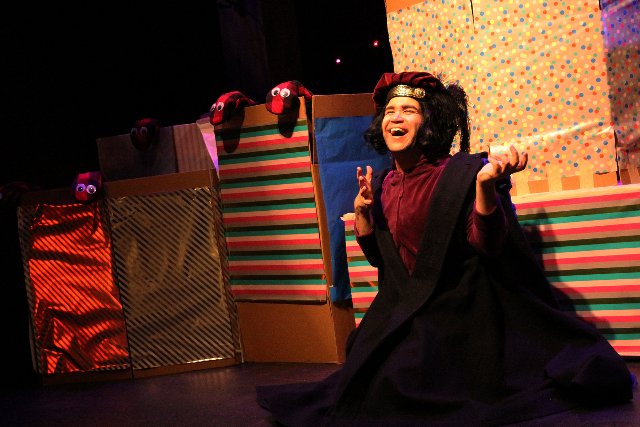 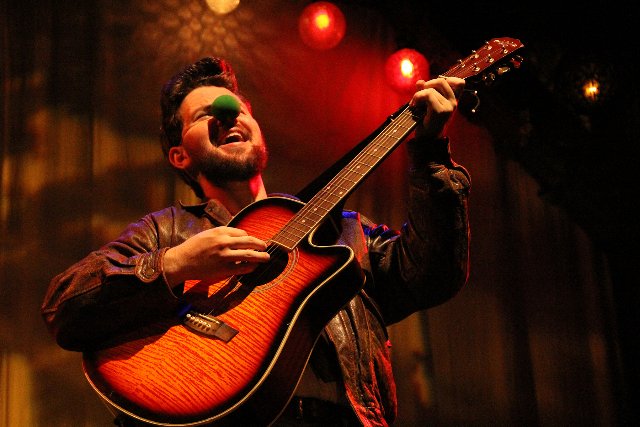 (Photo courtesy of Area Stage Company) Shrek (Ryan Bauta) plays his own instrument, as do the other actors. 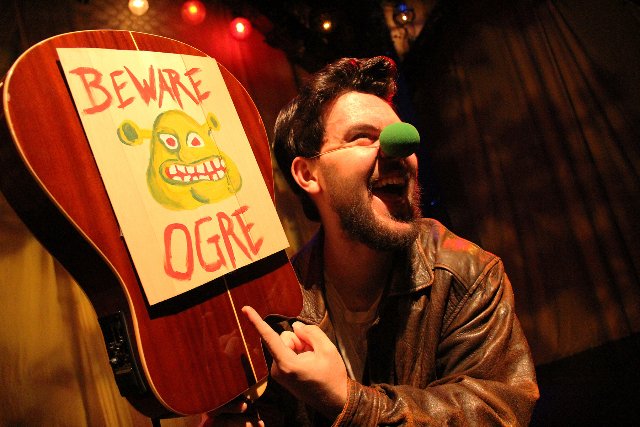 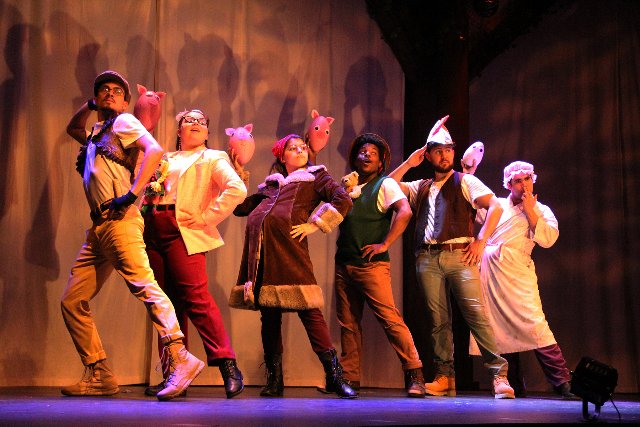 Can audience members believe in a world onstage even if the theatrical magic is simple and visible?

After witnessing Area Stage Company’s (ASC) exhilarating production of Shrek the Musical, there can be only one answer.

So what if we clearly see the pads protecting the knees of the actor playing Lord Farquaad as he obtrusively walks and kneels on them to become short?

Should it really matter if we can clearly see behind-the-scenes folks pulling strings to move a gingerbread man?

A production doesn’t need a huge budget and expensive, invisible special effects to enthrall and delight. That is particularly true if the production features versatile, energetic, convincing and charming performers such as those in ASC’s minimalistic mounting.

Musical Director Katie Duerr on the piano as well as Ryan Hecker on the drums and chimes also enhance the production. Hecker's playing adds to the magical aura, while Duerr's arrangements and playing, sometimes forceful sometimes soft, bring contrast and enhance mood.

The cast of seven, with a flair for the dramatic, proves adept at performing in a Story Theatre format.  They portray multiple roles and, in director John Doyle fashion, skillfully play their own instruments, beneficially contributing to the production. For instance, forceful guitar strumming punctuates a character's anger or frustrating moments.

The performers prove quite imaginative with a few props. At least one performer narrates to tell the tale of everyone’s favorite grouchy, green ogre. There’s just enough narration to emphasize the storytelling and plenty of action.

In director Giancarlo Rodaz’ approach, the seven actors are members of a thespian troupe performing Shrek the Musical at a kind of modern-day Renaissance faire.

This directorial concept makes sense for more than one reason. For instance, knights are among the characters in the stage musical and the source material. The latter is the 2001 American computer animated adventure fantasy comedy from Dreamworks Animation, based on William Steig’s picture book.

In the stage musical and the film, these characters combine with well-known fairytale personalities. They include Robin Hood, the Big Bad Wolf, Gingerbread Man, Peter Pan and Pinocchio.

Of course, Shrek would prefer to stay in his swamp alone. However, there’s a sense of community swirling around this make-believe world. This further validates the director’s vision of a Renaissance Faire serving as a framing device. Such fairs, after all, are all about communities of people coming together to share an experience.

In this production, the fair is more suggested than obvious. But while there are no chess matches or similar Renaissance-era activities, there’s no shortage of music.

We enter the theater to find the curtain is open. In addition, the performers are already onstage, strumming guitars, mingling among each other and interacting with us.

There’s a sense of camaraderie and person-to-person contact so sorely needed in these days of instant messaging and e-mailing.

Look closely, and you’ll notice a ball on a guitar one of the troupe members is playing. That green ball soon comes off the instrument and onto Shrek’s face – specifically his nose. This pretend body part is about the only indication that the actor playing Shrek (a versatile, multi-threat Ryan Bauta) has transformed into an ogre. Well, that and the convincing Scottish accent he employs, so recognizable from Myers’ performance as Shrek in the film.

Fortunately, Bauta doesn’t replicate Myers’ performance. The former creates his own brand of irritability, exasperation, anger and later charm, sensitivity and sense of being emotionally hurt.

“Ogres have layers,” Shrek says at one point. Indeed, this creature isn’t a one-dimensional character. He can be nasty, mean and even scary, like the beast in Beauty and the Beast. But, like the creature in that Disney classic, there’s a tenderness within the smelly, irritable green ogre. Who is the real beast here, we can’t help but ask.

Similar themes thread their way through such fairytales as Beauty and the Beast and Shrek. While children may delight in the colorful characters and antics, there’s a darkness that hovers over these and other tales, such as Into the Woods.

In Shrek, the self-loving Lord Farquaad, a Gaston-like character, has banished the fairy tale characters into exile. Surely, we can find resonance in that today, with immigration issues and refugees in the news.

Shrek may be “just” a fairy tale. However, if you’re searching for more relevance today, it’s hard to miss. The ogre, in his quest to be alone, plans to build a 10-foot high wall to keep others out of his swamp. In fact, there’s a song in the show titled “Build a Wall!” Moreover, the melody carries a fierce determination.

And if laughter is the best antidote to anxiety, witnessing a well-acted portrayal of Lord Farquaad may prove just as comforting as watching an expert Trump impersonator.

Farquaad’s a Trumpian figure, with his egotistical demeanor. But he’s also a comical villain in the vein of Captain Hook.

There’s plenty of comic energy within Corey Vega’s delightfully flamboyant Farquaad. He laughs maniacally at times and acts melodramatically at others, while conveying several of the seven deadly sins, particularly lust for power.

Speaking of power, Vega possesses a singing voice that’s varied and powerful, using it to his advantage in songs such as “Ballad of Farquaad.”

This ballad and the opening number, “Big Bright Beautiful World,” provides exposition not in the film. The expository material helps us understand how Shrek and Farquaad may have developed into the people they’ve become.

We also learn, in the film and the play, the background of Princess Fiona (a charming, radiant and ambitious Michelle Gordon, who delivers a multi-faceted performance). Her treatment before the story begins could anger many valuing the #MeToo movement. However, this princess proves she’s quite a warrior, and her triumphs should offset any harsh feelings.

Shrek is, at times, sentimental, melodramatic and formulaic. But, it’s hard to find too much fault in this charming, fun, funny and touching tale. After all, who can resist a talking donkey? Malik Kamau-Archibald plays him as a wise-cracking, fast-talking and at times compassionate animal. He sounds somewhat like Eddie Murphy in the movie, but stands upright. Just about the only hint that Kamau-Archibald is a donkey is the fur outfit he wears.

Credit Nathalie Moreno for the character-appropriate costumes. Meanwhile, Rodaz, in addition to directing, deserves kudos for the intense, varied mood-enhancing lighting. At times, we feel as though we’re looking at the colors of a Christmas tree, befitting this colorful tale. Rodaz, a man of many talents, also has designed the minimalist set, allowing the focus to be on the action and characters. Also, his use of muslin curtains allow previous events talked about onstage to play out live behind the curtains.

According to Variety, the budget for the Broadway production of Shrek the Musical checked in at roughly $25 million. At the time (late 2000s), it was one of the most expensive musicals to open on the Great White Way.

But Area Stage Company’s production proves a little imagination, even without a lot of money, can result in a magical production.

Moreover, in this mounting, our ability to see human beings, as opposed to merely actors fully hidden within animal costumes, reinforces the across-the-board appeal of Shrek’s themes.