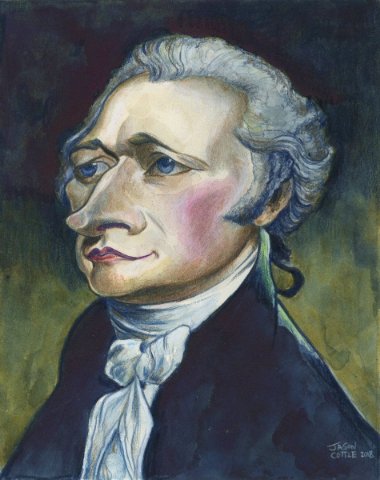 The Haunting of Lin Manuel Miranda by Ishmael Reed

Rome Neal's focused direction has led this play from its inception six months ago, to a stirring success. Carla Blank (assistant director) and Carolyn Adams' costumes work to pull the piece together.  Chris Cummerbatch's simple staging subtly divides our consciousness. On one side the modern world of the playwright at his desk and on the other, the trappings of  the colonial era. The Haunting of Lin Miranda asks us to be stirred by  truths surrounding the actual Alexander Hamilton, and like this fictionalized Lin-Miranda ( Jesse Bueno),  Reed asks us be awakened by the voices of the past.

The bewildered but concerned showman argues for Ron Chernow's (Tom Angelo) interpretation of the 'facts' and reveals that this biography of Hamilton had been his sole  inspiration and the only source for his information. The agent, (N. Allam Forester) with an unshakable belief in the reality of the successful version of the story, provides humor and contrast.

Amid the flurry of enthusiasm for the Broadway show, Hamilton, Ishmael Reed lays waste to the show's premises and assumptions, without deriding the talent or intentions of the remarkably gifted Miranda or his cast.

But what if – postulates Reed, the truths of Hamilton's relationship to slavery, Native-Americans, immigration, people's democratic participation itself were to become part of our vision? We can be carried away by Reed's intellectual barbs and pithy historical references as the controversial life of Alexander Hamilton unfolds. This play moves us into the painful realities of a society built upon the enslavement of of African-Americans  and destruction of  sovereignty for native nations. The always informative Reed has led us into an academic historical controversy. We are, however, bemused and moved by the narrative as it unfolds. Despite what might be construed as a dense and difficult thesis, Reed's script moves, and Neal's direction steers, toward a rapid-fire gravitas.

Miranda's Broadway cast is multi-racial, his Hamilton reflects the aspirations for a 'post-racist' society in modern America . There in fact was nothing post-racist about Alexander Hamilton or his time and place. In the turbulent years of the revolution of the thirteen colonies, the founding fathers wrestled with painful issues. Through compromise with agricultural Southers states they created the underpinning of the society in which its racist legacy endures. Ironically, Hamilton's  vision for our republic was the least democratic of the founding fathers. He advocated for creating an American monarchy.

A powerfully portrayal of George Washington, (Robert Turner) gives us a look at our first president. Washington was a slave owner and repressed the native population. His mentor-ship of the young Alexander Hamilton (Zachary Clarence) is divested of sentimentality. Reed has him advise Hamilton to make money, marry well.  The Schuyler family, into which Alexander Hamilton married, was rich and powerful. They were slave owners at a time when many New Yorkers were manumitting their slaves. Hamilton's in-laws, despite membership in the manumission society (the act of an owner freeing his or her slaves), retained theirs. Beyond  'a few house servants', but used forced laborers on their extensive estate. The actual recorded fate of some of these slaves are told in The Haunting.  Ben (Tommie J. Moore) and a 'negro woman' (Malika Iman) give voice to the life stories buried in the inventory. Monisha Shiva is riveting as Diana a captured run-away.

Ishmael Reed skillfully moves us from the particular to the general. A stirring speech by the ghost of Harriet Tubman ( Roz Fox)  transcends Hamilton's time and place to address the institution of slavery itself. The Haunting of Lin Miranda brings to the stage contradictions in the founding of our nation that haunt us still. Just as we cannot look back in time with the modern eyes, neither can we afford to readjust past realities to suit modern sensibilities. This is an important play, the more so as we as a nation  revisit these issues in their modern implications. Are they just voices of the ghosts of the past, or do we owe ourselves a closer listening? The feel good take-away is powerful. We do not have to sugar-coat or falsify to find American heroes.