Hold These Truths by Jeanne Sakata 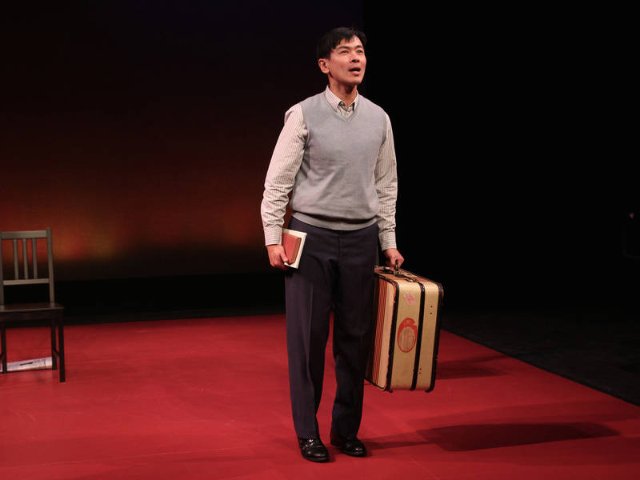 Joel de la Fuente in the one man show Hold These Truths. 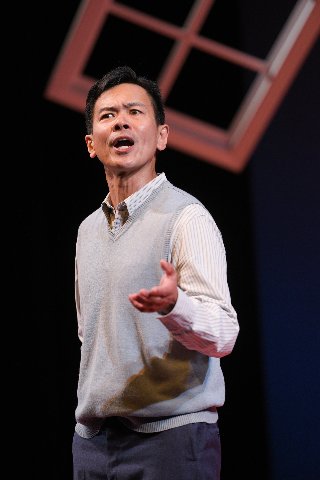 For ninety minutes, in the one man, one act play, “Hold These Truths” by Jeanne Sakata, the remarkable actor, Joel de la Fuente, utterly enthralls the audience. The powerful drama launches the season for Barrington Stage Company in Pittsfield.

The informative, emotionally riveting narrative conveys yet another example of racism and assault on our constitution. In the palpable climate that followed the unprovoked attack on Pearl Harbor all Japanese Americans were regarded as potential saboteurs and enemies of the people. Tarred with one brush an entire generation was denied constitutional rights and protections of life, liberty and property.

During WWII, under Executive Order 9006, signed by President Franklin D. Roosevelt, all Americans of 1/16th percent Japanese ancestry, were given two weeks to pack two bags and report to detention centers. For less than ten cents on the dollar in desparate haste they were forced to sell property, farms and businesses. After the war families never recovered their losses. Under President Ronald Reagan former prisoners were given $20,000 each as reparations. An apology to Japanese American citizens was issued by President Jimmy Carter.

Under concerns for acts of sabotage and threats of invasion the entire West Coast was declared a war zone. With no litmus test for loyalty to our nation some 120,000 individuals of which the majority were U.S. Citizens, were incarcerated. There was an uncanny similarity to NAZI Germany.  There were a number of rough camps with primitive conditions in the interior states. Recent immigrants were denied citizenship by law.

Following the December 7, 1941 attack on Pearl Harbor fear of a Japanese invasion was palpable. Initially, the Imperial army capturing territory in Asia and the Pacific islands was regarded as invincible. While a third of Hawaiians were of Japanese ancestery no action was taken against them during the war.

Our nation was also at war with Germany and Italy. In what is rightly regarded as racism, however, Americans of that decent were not removed to concentration camps. Like all other Americans they fought fascism in Europe and the Pacific.

With riveting brilliance de la Fuente conveys the true story of Gordon Hirabayashi, born a Christian and a Quaker convert, who on moral and religious grounds was a pacifist and dissenter. He was convicted of charges of violating the 8 PM to 6 AM curfew and for refusing to report for relocation.

After pretrial detention he volunteered for a 90 day sentence to be served “outdoors” at a prison camp. Initially, the judge imposed a shorter sentence but Hirabayashi had a different strategy. Under wartime conditions the judge agreed but there was no means to transport him to prison or pay for it.

Remarkably, Hirabayashi hitchhiked to the prison from Washington state to the South West. Upon arrival, the warden couldn’t locate the relevant papers and told him to go home. After some discussion the warden suggested he walk to town, take in an air conditioned movie, then report back. By then the sentence was verified and carried out.

When the sentence was served he was released. On grounds of racial discrimination, he then refused to sign a loyalty oath. Italian Americans and German Americans were not mandated to renounce loyalty to their native lands. For that offense he was sentenced to a year in federal prison. Upon release he was greeted by his wife and twin daughters. They later had a son.

With many twists and turns and shifts of mood, accent and character, de la Fuente navigates us through some fifty years of the life of his character. The many transitions are executed with flawless precision. We first encounter him as a child surrounded by his Japanese family, language and traditions. They are simple people. He quotes loved ones in Japanese and translates the texts.

He is told by his father not to be the nail that sticks out and gets hammered. Better to conform and play along. Early on he learns what it means to be “A Jap.” That was particularly true for rural Washington and its small population of Japanese farmers.

We learn of his pride in being an American. As a freshman in college as “Gordie” he lives in the dorm and makes friends. On campus he is a leader of Asian and Christian groups. He meets and later marries his Quaker sweetheart. He spends a summer as a delegate to a YMCA convention at Columbia. In cosmopolitan New York he is amazed not to encounter the discrimination he knew in Seattle.

In telling a complex story with many nuances he is supported by a superb design team. There are just three chairs on stage in a modular set created by Mikiko Suzuki MacAdams. For once the phrase “spot on” is particularly relevant to Margaret E. Weedon’s lighting and Cat Tate Starmer’s sound design. They allow our imagination greatly to expand embracing a rich palette of settings and possibilities.

Under the direction of Lisa Rothe the actor seemingly performs magic with just a few props including a suitcase and those semiotic chairs. As he maneuvers these elements there is a subtle and stunning choreography. Graceful movement is an important component of a masterful performance.

With blasts of sound that seem like gunshots we hear the gavel of courtroom appearances. We follow the long process of one of three related cases that were heard by the Supreme Court. Learning of defeat we share his shattered anguish. The title of the play “Hold These Truths” conveys his faith in the Declaration of Independence and Constitution.

With timely relevance  we learn that a President can suspend constitutional protection. With a declaration of war the commander-in-chief can designate American citizens as enemies and aliens. Similarly, President Trump has signed racist executive orders against immigrants targeting Hispanics and Muslims. These acts are making their way through courts.

While the play focuses on Japanese Americans during WWII there is a long history of exclusion. A series of laws known collectively as the Alien and Sedition Acts were passed by the Federalist Congress in 1798 and signed into law by President Adams. These laws included new powers to deport foreigners as well as making it harder for new immigrants to vote.

Under President Woodrow Wilson, during WWI, he enforced the Sedition Act of 1918. It forbade the use of "disloyal, profane, scurrilous, or abusive language" about the United States government, its flag, or its armed forces or that caused others to view the American government or its institutions with contempt. Those convicted under the act generally received sentences of imprisonment for five to 20 years.

In particular Wilson invoked it against socialists International Workers of the World (IWW) or Wobblies. Party leader Eugene Debs was given a ten year sentence. The “Red Scare,” and loyalty oaths that Hirabayashi refused to sign, prevailed during the era of McCarthyism in the 1950s. Citizens went to jail for contempt of Congress.

We left an extraordinary evening of theatre with a lot to think about. Thanks to Barrington Stage Company for reminding us yet again that in our democracy “All men are created equal” more or less.