Library of Congress and Portland Ovation 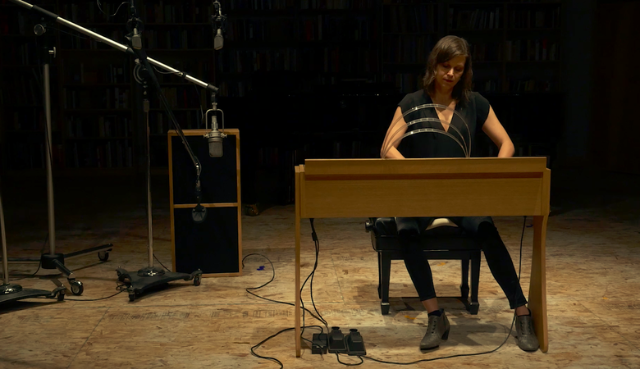 Suzanne Farrin on the Ondes Martenot for a live stream concert.

The original grande dame of music in the Berkshires was Elizabeth Sprague Coolidge.  She founded chamber music concerts at South Mountain which continue to this day.  She assisted in the creation of what would become Tanglewood, but backed off when this venue appeared to have a potentially life-threatening impact on the chamber music venue.

Coolidge turned her attention to the Library of Congress.  She financed the building of a concert hall for this institution.  A concert planned at Coolidge Hall this spring was presented live streamed instead.  The Library of Congress joined with co-presenter, Portland Ovation, and the International Contemporary Ensemble to present a program that worked amazingly well in Zoom.  Not one Zoom Bomb was lobbed.

Portland Ovation is a Maine arts association which concluded their 89th season with this one of a kind concert: two world premieres, a triad of partnerships, innumerable moments of brilliance.  Executive and artistic director Aimée M. Petrin reports the concert: "Joyful (who will ever look at two mason jars the same way again?). Transporting. Calming. Inspiring. Hopeful."

The program featured a documentary on composer Suzanne Farrin.  Farrin is known as a composer who treats the sounds emerging from an instrument in all its glory.  We not only get the conventionally taught tones and textures, but whispers of the wind on a horn’s surface, the pulse of the body that holds a clarinet.  Farrin also is a specialist on the Ondes Martinot, an instrument favored by Olivier Messiaen.  Interestingly, as many of the artists represented at this concert spoke, this composer was mentioned as the twentieth century composer who most influenced them.

Farrin chose the “Louange à l'Éternité de Jésus” from Messiaen’s Quatuor pour la fin du temps to perform with Ondes and piano.  It may be that one page from a hastily composed sextet for six Ondes Martenot which had been commissioned by the Paris Fair of 1937 was used for this movement.  In Paris it had been accompanied by lights darting over spraying Seine water. Farrin sensed both the ‘prayer’ and the water in the piece.

The pianist Jacob Greenberg and Farrin agreed that the long distance collaboration had worked for them, as each had the other’s performance on headsets at their ears.

Translating this idea to Ball jars was the idea that had sparked Ashley Fure’s interior listening protocol 1, a world premiere. The composer invited us to raise two bottles as she did, placing one over each ear.  The intimate resonance was well-suited to our current confinement.  In an accompanying video, the creator changed the color and texture of the composer’s eyes as we followed her hand and arm movements.  Their colors drew us closer.  Some listeners heard the ocean.  Others felt it was a sea shell.  Yet through the shell you were hearing altered sounds created by Fure.

Farrin, ever experimenting with the extended sounds of an instrument, created a work for harp. She had a old harp on which she had done her first experiments.  When Nuiko Wadden joined her to perform on her well-kept up instrument, she had to struggle to elicit the sounds Farrin had in mind to suggest deeper beauty.  A score moved before us as the performance took place.  While it did not have the geometry of a George Crumb score, the daring the composer asked of the instrumentalist was clear on the page.  It helped the ear grasp the glissandos and piano like chords too.

Farrin’s Nacht is from a new song cycle.  It too was a world premiere, co-commissioned by the Carolyn Royall Just Fund in the Library of Congress and ICE.  Alice Teyssier sang beautifully.

This concert is a reminder that our national government does so many things so well. Over six hundred new musical works have been commissioned by them.  Bravo Library of Congress.