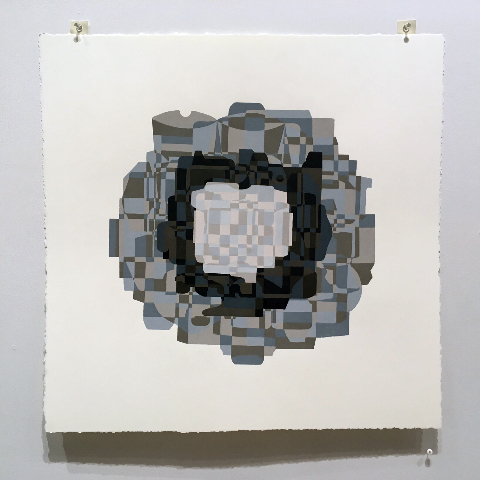 Mandala like drawing by Sarah Fagan. Images courtesy of the artist and Julia Dixon. 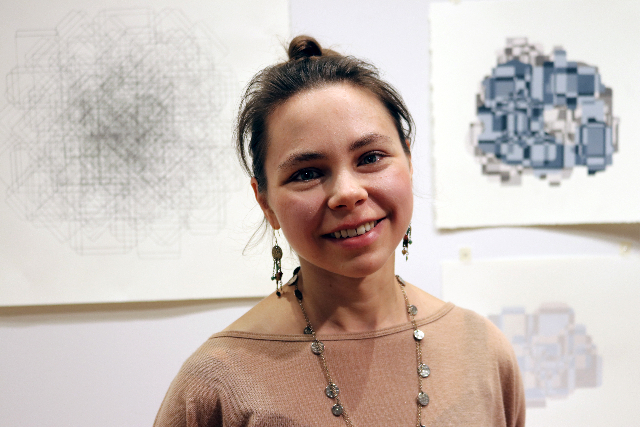 A portrait of the artist by Charles Giuliano. 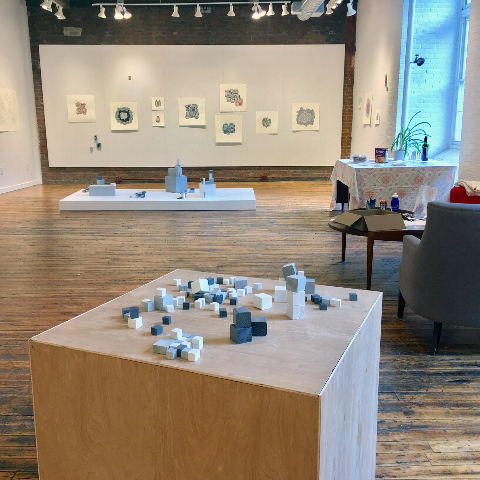 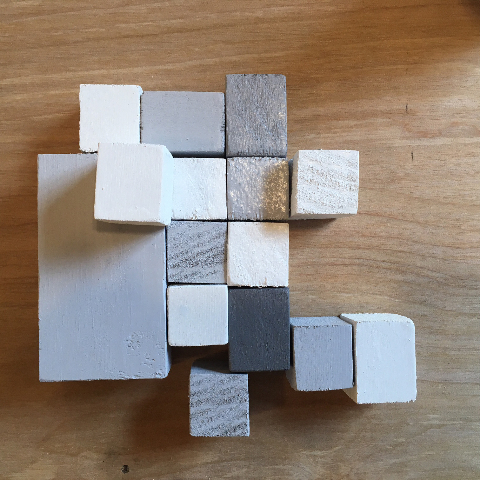 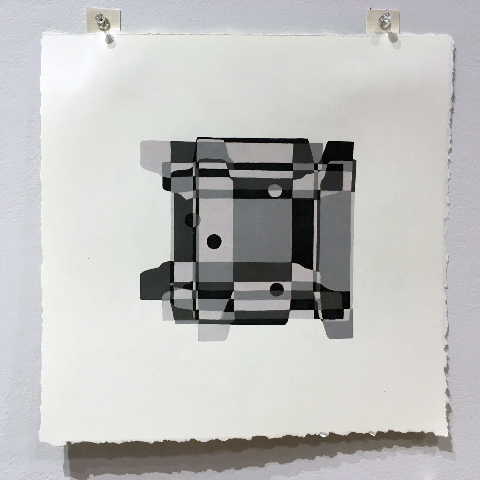 The first impression of a series of geometric abstractions on paper was that the flat, matte medium was gouache. It was a surprise to learn that they were created with Prismacolor pencils.

To make that point a shelf of them are lined up in the central niche, under the logo of the Eclipse Gallery, in the artists' loft building in North Adams, Mass.

The visual deceptions of the mandala-like works is but one of many tantalizing elements of the one person exhibition, Reconstructions, by Sarah Fagan which is on view, Thursday through Saturday, ending on June 24.

The works were created over several months while she was applying to graduate schools.

She moved to the Northern Berkshires but will depart soon to commence an MFA program at the University of Texas, Austin.

In addition to the pristine and absorbing drawings there are a number of cube shaped objects of varying dimensions. They are displayed on a low flat as well as on a large, plywood cube.

Visitors are invited to handle the objects and impulsively rearrange them. In that aspect this is meant to be an interactive exhibition. It provides both visual impressions and hands on opportunities.

There are many antecedents for the non objective imagery. There is a trajectory that starts with early modernism in reductive paintings by the Russians, Malevich and Kandinsky, the Dutch artist, Mondrian, the Bauhaus master Albers and a soupcon of Buddhist mandalas.

As the artist gently inserts it's not really about all that.

She had a far more direct and pragmatic explanation.

With understated legerdemain she produced a small box that had been "deconstructed." It may have held a beauty product like a tube of lipstick. Apparently, she selected a number of boxes of varying sizes and configurations.

Of course, nowadays, just about everything is "deconstructed." The artspeak term even showed up on the menu of a fancy restaurant we visited in Gloucester. The server explained that it had all the elements of a fish chowder but deconstructed.

One might just say that the artist took apart or disassembled the array of boxes.

Once flattened they became templates for creating patterns on paper.

With impish flair she described how the line drawings of overlapping boxes became like a "coloring book." With an array of pencils, and carefully controlled hue and chroma, she filled in the blanks.

The resultant image is either rather neat, precise and simple or as complicated as a labyrinth if you get into "deconstruction" and theory.

In that sense I am an "old school" critic who mostly enjoys looking at things.

As is the case here, there are times when visual spontaniety, and theory, crisscross with pleasing serendipity.

The drawings are absorbing and easy on the eye. The intricate patterns enticingly draw us in.

There is a bit of cleverness and invention as the artist has explored gamesmanship.

It is almost better if, just looking at the absorbing tones and patterns, we really didn't know how they were derived.

A magician never reveals the tricks.

The works are indeed magical; even though I know more about them than I really ought to.