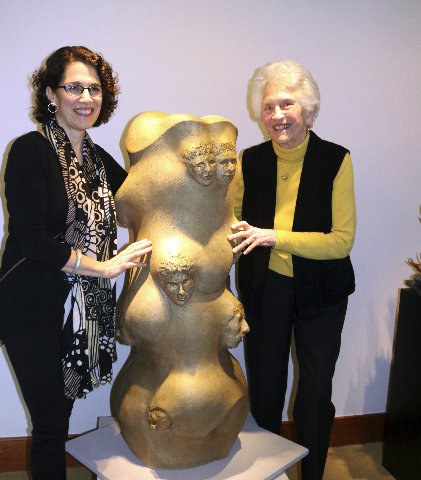 Ellen and Nancy with their collaborative piece. Giuliano photographs. 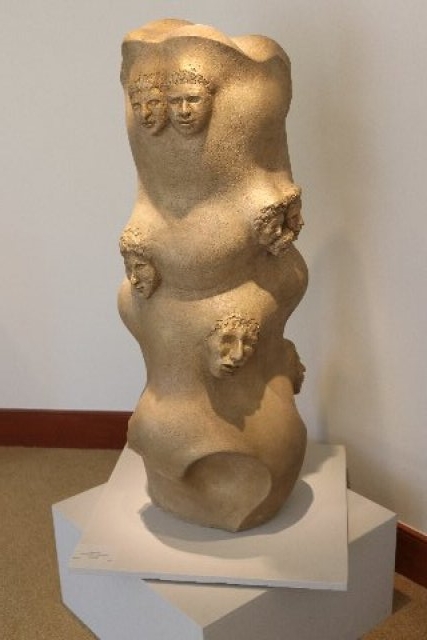 “L’Dor V’Dor” is the centerpiece of the exhibition. 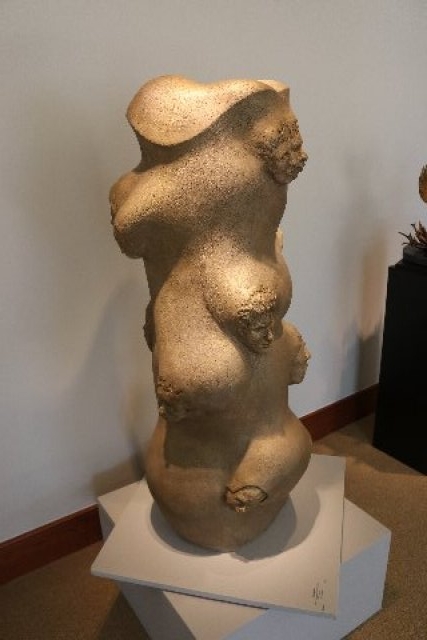 Viewed from another angle. 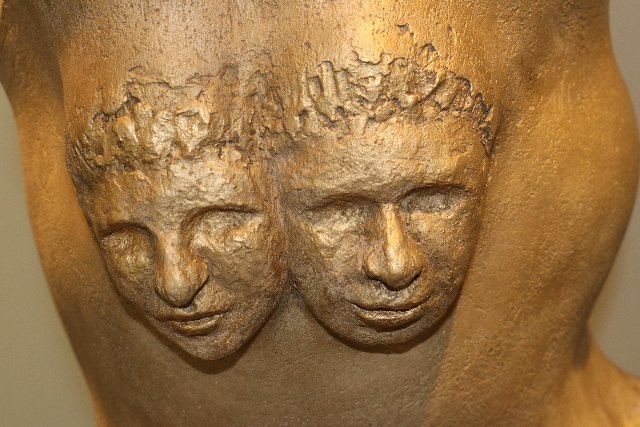 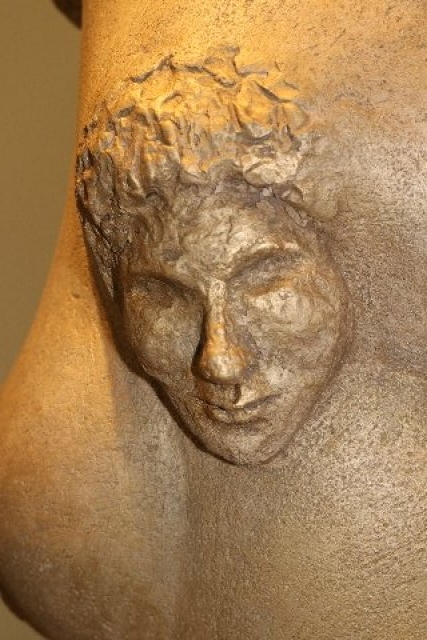 A small scale version of Nancy's iconic "Make Way for the Ducklings." 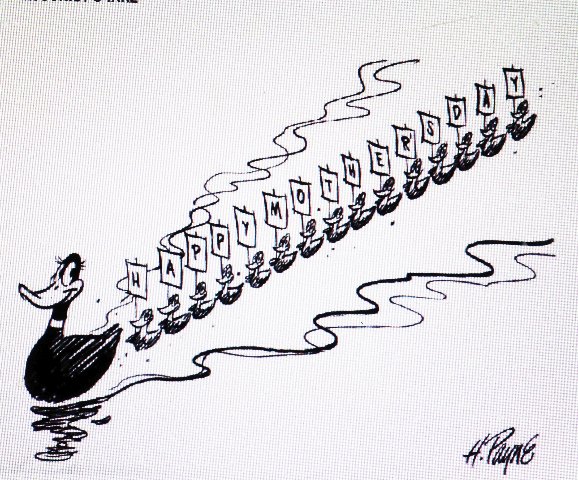 It inspired a Moher's Day cartoon. 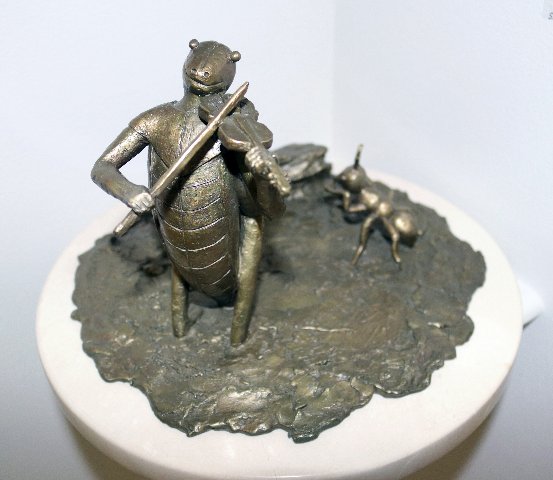 From a series on Aesops Fables. 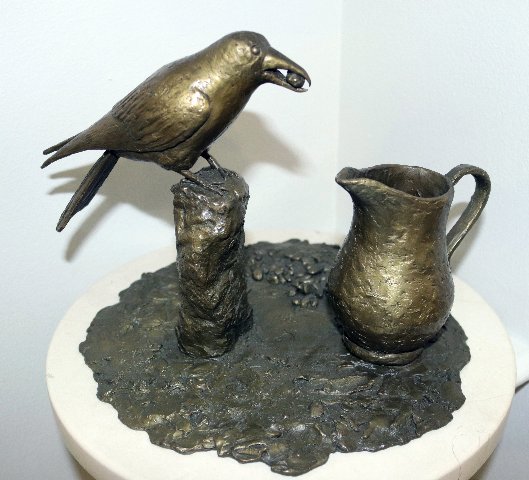 The crow and pitcher. 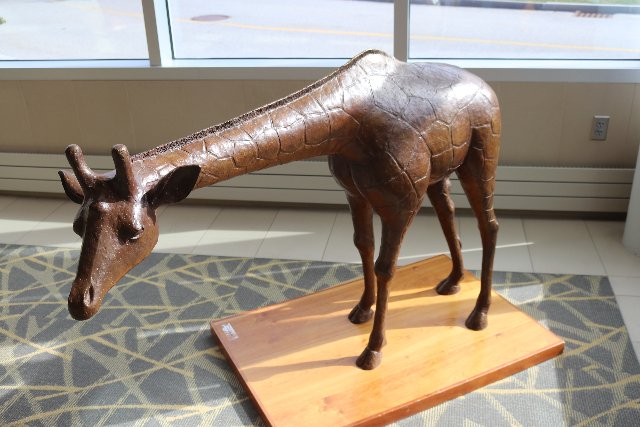 This is the scale of a newbory giraffe. 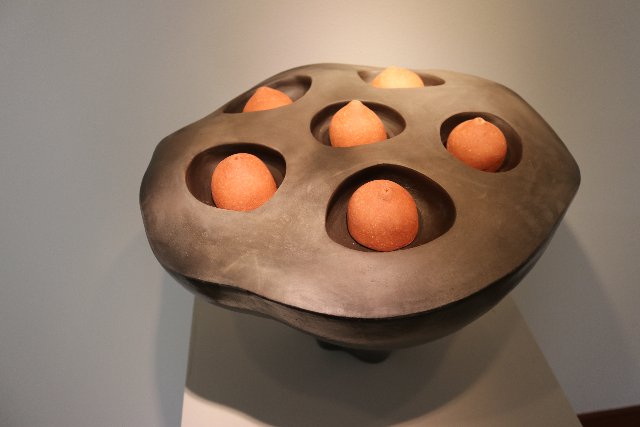 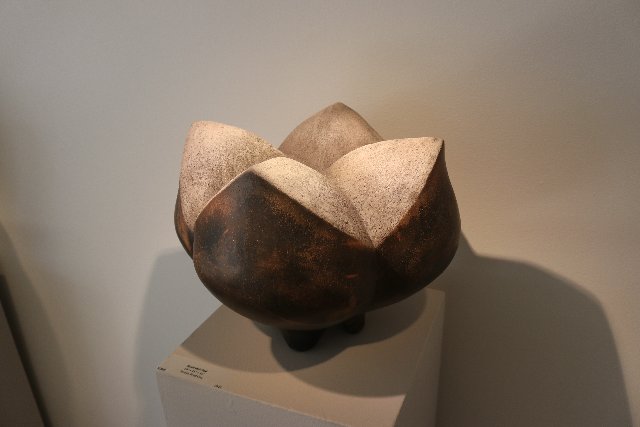 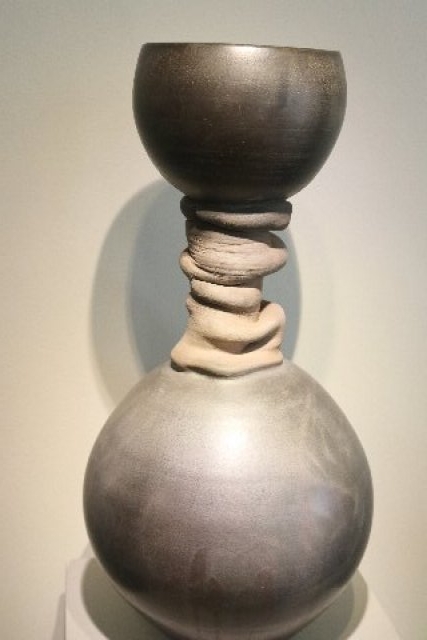 On the edge between art and artifact. 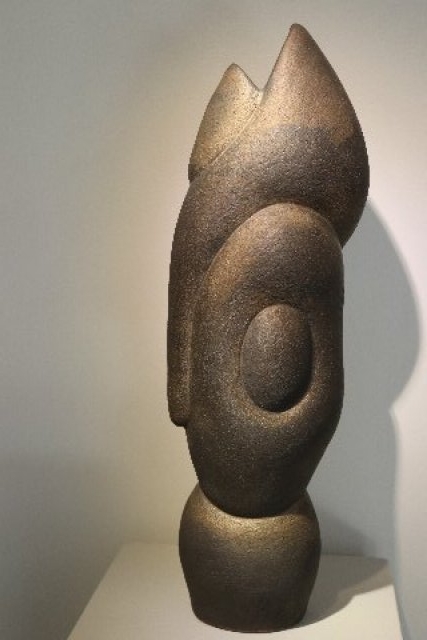 The special exhibition at Art Gallery at North Hill in Needham, “Schön and Schön: From Generation to Generation,” represents a  remarkable occasion and celebration.

For several months mother and daughter collaborated, for the first time in their careers, to create a stoneware sculpture “L’Dor V’Dor” (44 x 18 x18”). The title in Hebrew translates as “From Generation to Generation.”

The senior Nancy Schön, now 89, is a sculptor of animals including in this project small illustrations from Aesop’s “Fables.” She is world renowned for her “Make Way for the Ducklings” bronze pieces, based on the beloved book written and illustrated by Robert McCloskey. It was first published in 1941. There is a small version of that iconic work in the exhibition. She also cast a full scale set of the ducklings for a site in Moscow.

During a gallery talk she discussed the complex process by which that signature project came to be commissioned for what she described as “hallowed ground” on Boston’s Public Garden just steps from the swan pond. With humor she spoke of a woman who creates seasonal outfits for the ducks which are a delight for children of all ages.

I recall reading the book, then as young as I was, back in the 1940s. That was decades before tourists navigated the streets of Boston and splashed across the Charles River in the famous Duck Boats.

The younger Ellen Schön is the Ceramics Studio Supervisor and an adjunct faculty member at Lesley University College of Art and Design. She makes abstract, non functional vessel forms. This summer in Finland she will collaborate with an artist friend.

We met Ellen several years ago at an arts conference in Boston. During a weekend with us in the Berkshires she described progress on the collaboration and its many challenges.

Once the decision to work together was made there was much discussion as to what form it would take. While both work with additive process in clay, stylistically, they are more than just generations apart. Nancy creates accessible, animal, figurative pieces while Ellen explores  abstraction.

A common denominator was the medium of clay. Essentially, Ellen would create what proved to be a large and technically challenging vessel form to which Nancy would add several faces accenting its perimeter.

To document the project they shot, and Ellen produced, a ten minute video with musical accompaniment by her son.

The process appears to have been labor and time intensive involving coming to mutual aesthetic decisions. During an interval in the video Ellen holds up a head at a certain height and they agree it should go there.

I was intrigued as to how that would be done? By then, the object was already quite large. What followed was a simple, ancient technique. A thick coil of clay was rolled out. This was then set on the top edge of the piece and the surfaces were pressed together. Then the clay was “slapped” all around with a paddle and smoothed into a seamless surface. At the agreed upon height the face created by Nancy was pressed in and secured.

During the opening celebration there was a talk by the artists followed by a lively Q & A. Who do the faces represent was asked? One suggests an Indian chief and another Ellen said loosely resembles her deceased husband.

Viewers are invited to bring their own interpretations of the meaning of their collaborative work.

Once it was finished there was a real challenge. The scale of the object required a large kiln and the problem of getting it there. That entailed professional movers.

When fired there was the matter of surface which normally would involve refiring with a glaze. They opted not to do that and experimented with how to create a metallic-like, painted, patina resembling bronze.

With some humor Ellen discussed the difficulties of trial and error as well as the crouching down that entailed.

The result is  sublime. How wonderful that after long careers in the arts they had this unique opportunity to work together. Not to say that there weren’t tensions and complications. That comes from any artistic collaboration then, add to that, mother and daughter.

Talking with Ellen about this unique opportunity for closure was emotionally moving. This experience reminded me of the six hours of tapes that I made when driving my Mom home from Florida. Years later they were transcribed and became part of a book.

The tapes evolved into unique and poignant collaborative work. Everyone should avail themselves of such opportunities. That’s why their work was about much more than just an object in an exhibition. It delved deeply into family, conflict, resolution, respect, interpretation, understanding and love.

The exhibition remains on view through June 28 at the North Hill community complex, 865 Central Avenue, in Needham, Massachusetts, 02492. It is easily reached by Route 9 from Brookline Village.

A version of this article was previously posted to Boston's The Arts Fuse.