The How and the Why at S&Co.

Going With the Flow 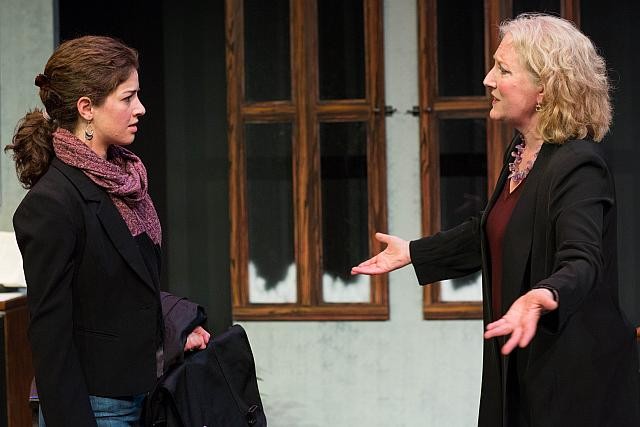 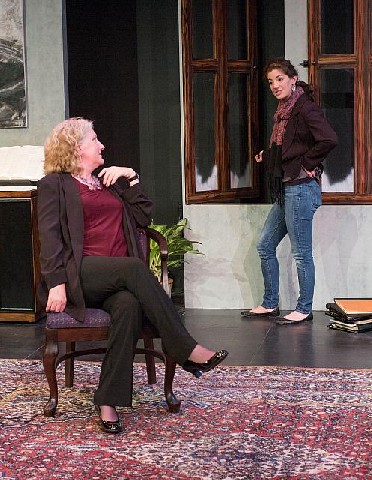 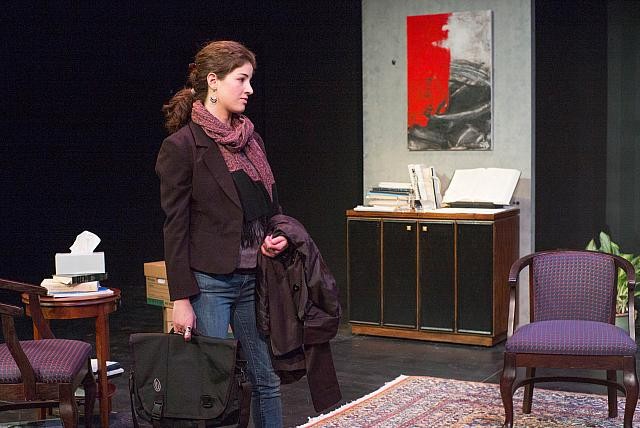 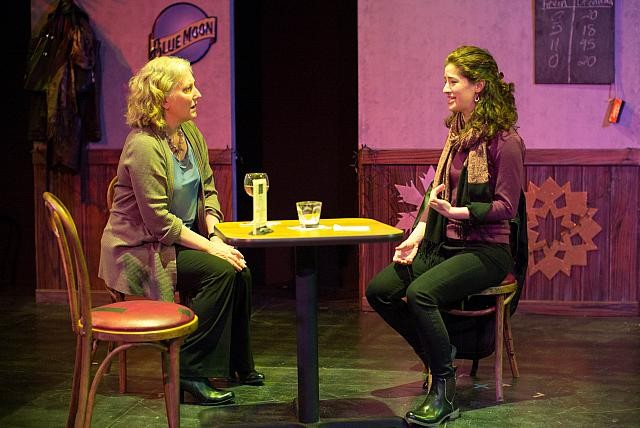 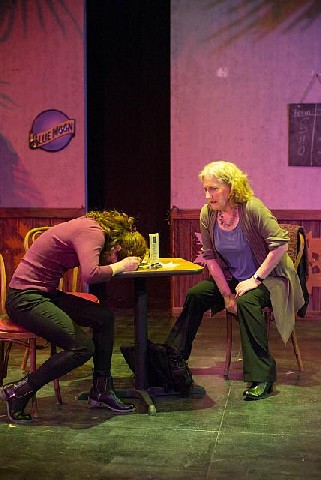 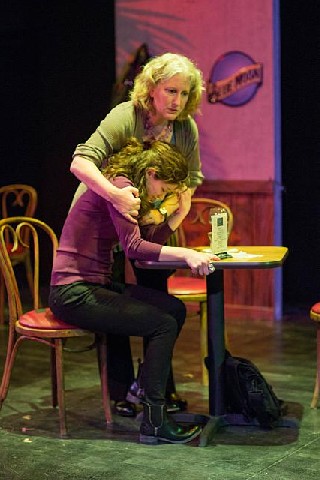 There is a complex mix of real science and fiction in the intensive, two act, two hour, two hander “The How and the Why” by Sarah Treem (“The Affair” “House of Cards” “In Treatment”).

In science it seems that there are facts and phenomena, The How, and theories about The Why.

Initially, it is not clear what brings them together for a tense and awkward meeting on the eve of a major conference. The young woman has submitted a paper with a radical theory that menstruation is a defense against pathogens transported by sperm. The paper has been read and provoked discussion but received only one of  two necessary endorsements for consideration of being presented. Zelda knows of this but has not read the paper in question. The single endorsement is from her former graduate student. As a board member she has the authority to schedule Rachel’s presentation. That occurs with complications.

The exchanges between the women keep us intensively absorbed as the play probes not only science and its process but multi-valent tangents of love, sex, motherhood, careerism, selfishness, and the nature of genius.

While Treem stretches the limits of plausibility by a factor of serendipitous coincidence with odds of about a million to one, if you are willing to suspend logic, this compelling and tense drama, relieved by outbursts of mordant humor, is a firm launch for another season of Shakespeare & Company.

This comes after a brutal winter that has left the company shaken not stirred as was alluded to last night by co-artistic directors, Ariel Block and Jonathan Croy. With the departure of two former artistic directors and top down board changes since last summer these long term company members have been pressed into the breach.

In the audience and the opening night reception that followed the performance there was a strong presence of the company, truly a family, which has endured so much internal strife.

New board chair and treasurer, Kenneth Werner, spoke briefly. Evoking a poetic analogy Croy described a violent summer storm with thunder and lightning, soaking rain and felled trees. Indeed the company has endured a Tempest. The next day, as he stated, the grass may still be wet but there is a bright blue sky and refreshing clearing of the air.

The play’s the thing.

And what a fine production to bring back a focus on the work. Apparently one of the daunting issues that divided the board and artistic directors was finding the right balance between contemporary work, developing new plays, and a devotion to the traditions of Shakespeare. Last season had too little of the former and even the contemporary plays had Shakespeare based themes.

Significantly, the sold out hit of the season was the hilarious “Vanya and Sonia and Masha and Spike” by Christopher Durang. It could have run for another month at the least.

Finding a right balance between rock solid, richly debated scientific facts and wild stretches of imagination as director, Nicole Ricciardi, has evoked finely honed, masterful performances balancing the raw emotion and energy of the at times strident and hysterical Rachel and the grounded, worldly, self assured Zelda.

Zelda knows the Why of difficult personal and professional decisions. Now, some 28 year later, they are being probed and challenged. Just what is owed to the daughter she abandoned for those now vunerable reasons?

As the plot unfolds Rachel has the upper hand leveraging a moral imperative having been terribly wronged by Zelda. It takes time to unfold but it is revealed that she was abandoned for adoption  just six days after birth by the woman she is meeting for the first time.

It ensues that they are terribly alike, far too much so, by any possible stretch of poetic license. At the age of five Rachel was informed by her now deceased parents that she was adopted. It was only in the past two weeks that she learned the identity of her birth mother.

Fortified by popping a bottle of champagne at 10 AM Zelda declares being willing to answer any questions. Under such circumstances it is often essential to learn of family medical and genetic history. That doesn’t happen. It is unclear just what Rachel hoped to gain from the meeting. There are regularly paced intervals in which she wants to bolt. She is drawn back when Rachel appears to be genuinely intrigued by her theory and willing to have it presented at the conference.

That happens with unanticipated, devastating consequences. During the Q&A she was humiliated and unable to defend attacks on her theory. She is too destroyed to return to the lab and her graduate program. Because of a mixup of authorship of her theory there is a breakup with her boyfriend and science partner. Her career and personal life are a total mess. This occurred because of the help/ intervention of Zelda in programming research that was not ready for presentation.

Be aware that there is a lot of discussion of science in this drama. It requires total concentration on the part of the audience to follow the nuances of unique human menstruation and menopause. You will emerge from the play with head thumping insights to the evolution of the human reproductive system.

When the 28-year-old Zelda became pregnant by her twenty years older, renowned, Post Doctoral advisor, she abruptly left Columbia for field research of the Hadza hunter-gatherers of Tanzania. From this experience she derived her Grandmother theory of how older menopausal women in the culture gathered food to feed and nurture their older grand children. This allowed for more time to develop their brains beyond those of primates and proved to be a crucial step toward understanding the Why of human evolution.

In developing her dramas, particularly theory and science rich works like the HBO series “In Treatment” as well as “The How and Why,” Treem digs deeply into the research. Her deft handling of complex relationships is reflected in her work on the television shows "The Affair" and "House of Cards."

In developing this science themed play Treem was initially inspired by reading “Woman: An Intimate Geography” by Pulitzer-prize winning New York Times journalist, Natalie Angier. For the theories of Zelda and Rachel she drew upon the work of Margie Profet, Kristen Hawkes and George C. Williams.

Initially, there was an awkward collision of mother and daughter with no discernable agenda. Early on Zelda blurts out that Rachel is beautiful. “I know” is the deflating response. There is so much rage in Rachel as well as the confounding arrogance, ignorance, and immaturity of a brilliant twenty-something. She aspires to all that her mother has achieved including status in the field and tenure. In attack mode Rachel sees her as alone, vulnerable and unloved. The ersatz “lover” of Zelda proves to be her oncologist. She has cancer as the result of too much estrogen following menopause. Are you ready for this, it is the very drug that was developed by her former advisor and father of Rachel.

It is a tribute to the skills of the cast and director that such absurd plot point coincidences are presented as quasi credible. Rachel is stunned and thrilled to have such a famous father. Zelda squashes that by revealing that his research was subsidized by the pharmaceutical industry and was about marketing a successful but potentially carcinogenic product.

Beyond How and Why the play evokes another theme, Now What?

Setting aside all the daunting science we are riveted by complex human issues of just what mother and daughter want and expect from each other. They are so terribly alike, a trope of the playwright, but how to overcome the guilt and rage of being separated at birth.

Zelda simply suggests sharing holidays while the enraged Rachel states that she is not going to hold her hand as she dies of cancer. She has already buried two parents.

During the second act over drinks and chips in a bar (sets well designed by Patrick Brennan) they work their way toward a heart wrenching resolution. At the apogee of conflict and tension Rachel has a scary panic attack. Zelda deftly talked her through it with breathing exercises.

A grateful and relieved Rachel asked how Zelda knew how to overcome the attack? The one word answer “Lamaze” cracks up the audience.

It is an example of the deft manner in which Treem navigated us through an evening conflating all that top heavy science with seething guilt and rage. Just when the tension between the women threatens to blow the top off of audience patience her light comedic touch allows the drama to let off some steam.

This proved to be a solid and much needed affirming launch to what promises to be a strong season for the company. What a relief after such a brutal winter in the Berkshires.