US Premiere at Irish Theatre of Chicago. 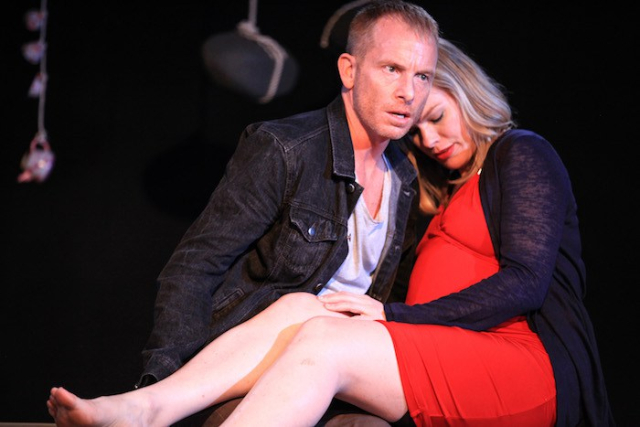 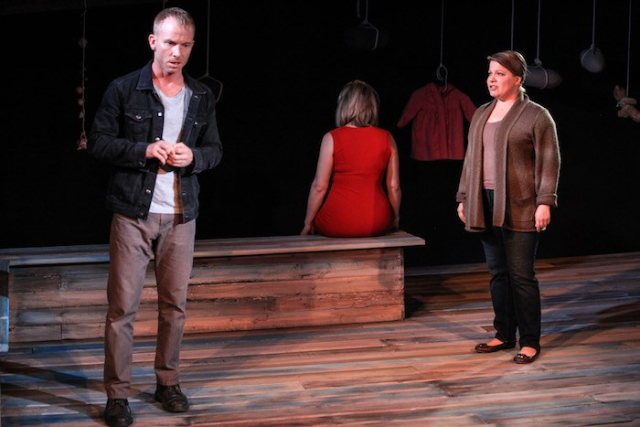 The struggles of single parenthood and the dread of losing a child cause the worlds of Conor (Dan Waller) and Susan (Jodi Kingsley) to spin out of control in the tense 75-minute play, Spinning, at the Irish Theatre of Chicago.

The production, carefully directed by Joanie Schultz, is the U.S. premiere of Deirdre Kinahan’s play. When we meet Conor and Susan, she is in deep and angry mourning about the death of her teenaged daughter, Annie (Tyler Meredith), in a car accident four years earlier. Conor, who was driving the car and served four years in prison for the accident, has come to see Susan to explain what happened and perhaps gain redemption. Gradually over the course of scenes that wrap back and forth in time, we learn about that fateful day. The connection between Conor and Susan is the heart of the play and his relationships with Annie and his wife Jen (Carolyn Kruse) are the cause and effect of his pain.

Jen and Conor marry after Jen divorces her husband. They have a daughter, Kate. By the time Kate is 6, Jen has a successful career and is beginning to grow out of the marriage. The disintegration of his marriage terrifies Conor because he knows he could lose his daughter. (Divorce has only been legal in Ireland since 1997 and custody rights were virtually always granted to the mother.)

Conor and Annie become acquainted in a park and, in later scenes, Annie clearly is reaching out to him, either romantically or as a father figure or both. He tries to resist her advances, but takes advantage of her interest to get her to take care of Kate when his daughter visits him. Eventually Conor takes drastic action to be with Kate and the accident that kills Annie is the consequence.

Time and scene changes are signaled by lighting the two characters in the current scene while the other two actors are in the shadows. The time changes sometimes leave us puzzled about what was happening when. The Conor-Susan scenes take place in the present and the accident happened four years earlier, while Conor and Jen’s story started 12 years in the past. Including a reference to times and locations in the playbill might have helped. (Why is it that many theaters omit this information from their playbills lately?)

Spinning is notable for its fine direction and acting. Dan Waller is one of those solid Chicago actors who plays many types of roles and makes each one his own. His portrayal of Conor is wrenching and passionate as he gradually learns so accept his responsibility for his actions. Jodi Kingsley is very believable as the grieving mother. Meredith and Kruse complete the strong cast.

Grant Sabin’s set design suggests the seaside with a wooden boardwalk and cornered benches. Cat Wilson’s lighting is an essential element in the narrative. The dialects of all the characters show Kathy Logelin’s effective coaching.

Playwright Kinahan’s Spinning raised the visceral issue of parental custody when it was first produced in Dublin in 2014. Her play Moment about a family torn apart by a secret was a critical hit at Steep Theatre in 2012. Kinahan has written about two dozen plays and is working on a feature film. Her new play, Wild Sky, explores events in Ireland leading up to Easter 1916.

The Irish Theatre’s production of Spinning runs at the Den Theatre, 1333 N. Milwaukee Ave., through July 3. Performances are Thursday-Saturday at 7:30pm and Sundays at 3pm. Tickets are $26-30.