Furniture with Soul At Gallery NAGA

Referencing the Book Furniture with Soul by David Savage 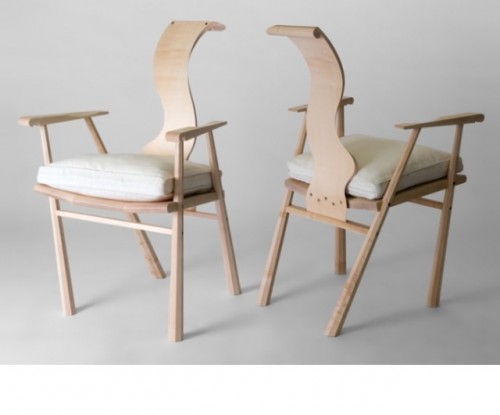 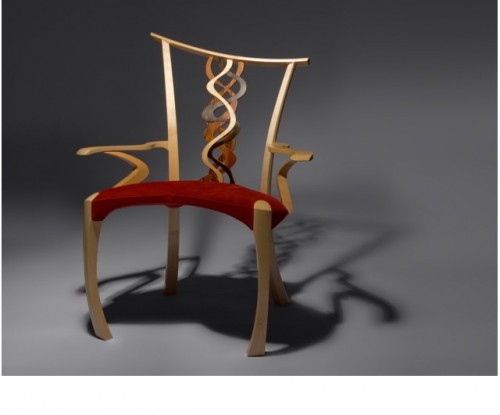 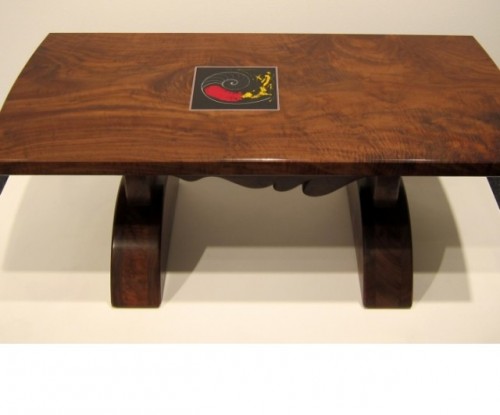 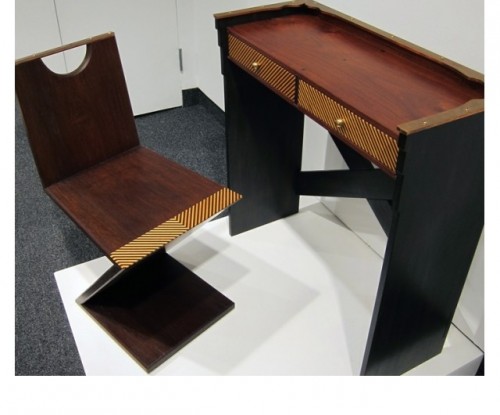 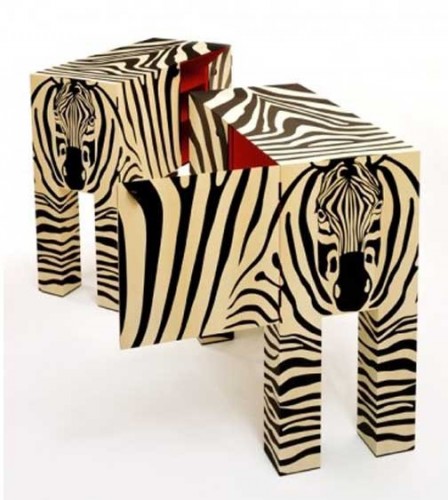 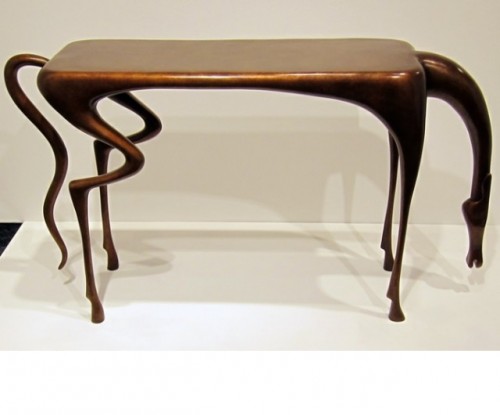 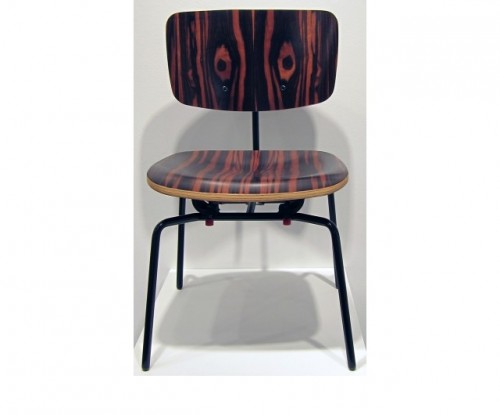 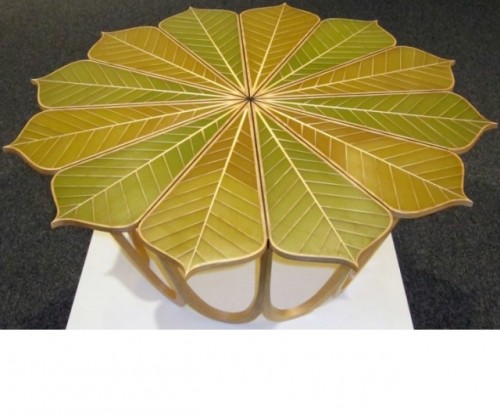 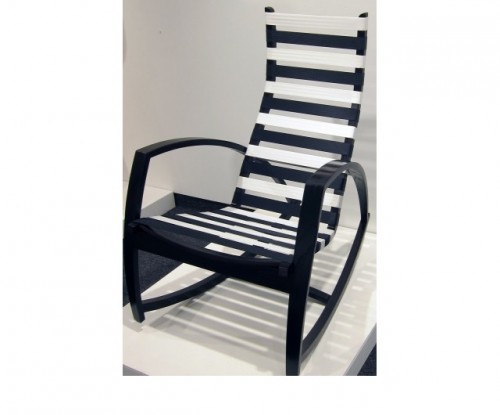 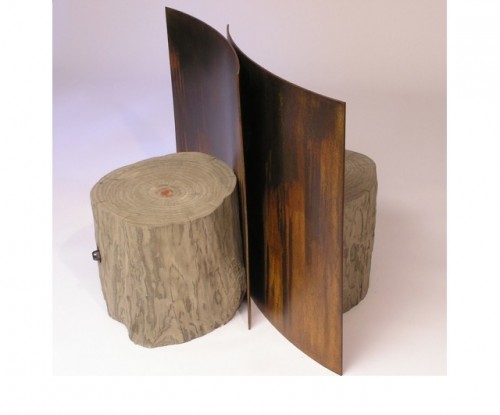 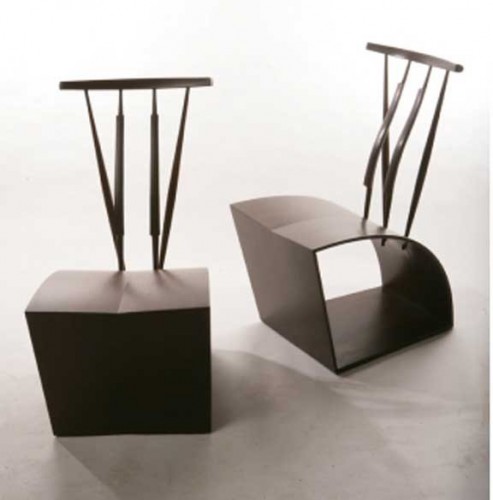 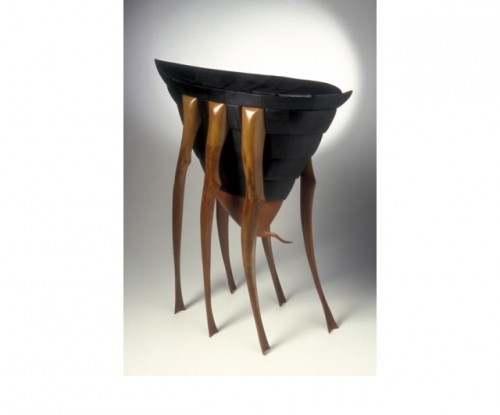 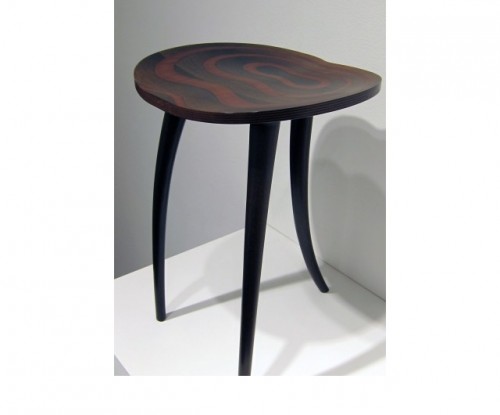 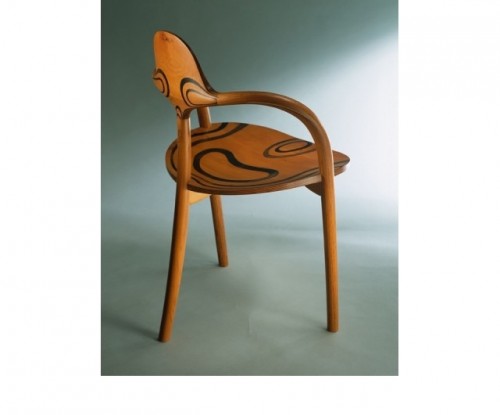 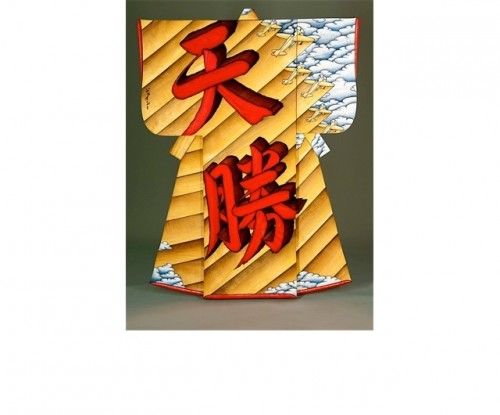 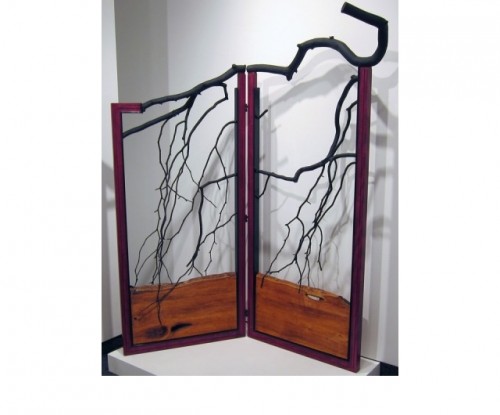 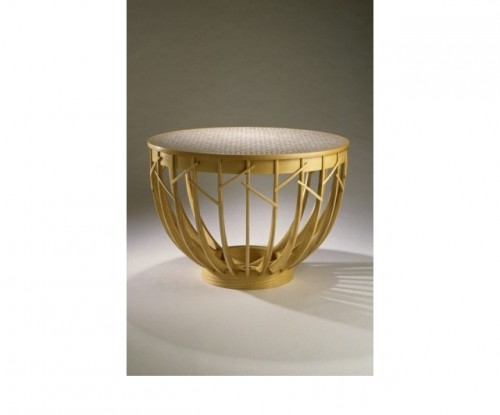 Gallery NAGA is perhaps the premiere studio furniture venue in America, certainly one of the best in the world. Their current exhibit, Furniture with Soul, adds to the gallery's unique and long history of showcasing the best studio furniture by the most notable practitioners in the field. This exhibition is thematically based on David Savage's book Furniture with Soul.

One of the most meaningful and perhaps extraordinary aspects of the best of studio furniture is the fact that it transcends both art and design. It is beautiful and functional as well as something viscerally much more.

Of the 20 studio furnituremakers discussed in the book, there are nine master craftspeople included in the Gallery NAGA show. They are Garry Knox Bennett, John Cederquist, Peter Danko, Thomas Hucker, Michael Hurwitz, Jack Larimore, John Makepeace, Judy Kensley McKie as well as David Savage, the author of the book. Each individual brings their own distinct creative signature to their particular furniture pieces.

Form, function, material and often whimsey and wit characterize the work in the Gallery NAGA exhibit. This is sculptural form not only with functional applications but with character and often personality.

Savage's Furniture with Soul is a compelling, well-illustrated book that explores the philosophy, careers, and pivotal moments of personal struggle and inspiration of some of today's most talented and inspirational studio furnituremakers. The author traveled throughout the US and Britain as well as to other countries to interview masters in the field. With "candor and an uncompromising eye," he focused on individuals dedicated to creating objects that fill us with wonder, admiration and awe.

In his introduction, Savage sees "soul" as an unspoken or undefined "quality." This is a quality beyond the notion of simply well made or fine craftsmanship. He understands this extra or extraordinary ingredient as a "profound form of communication" that has little to do with conscious thought. Savage suggests that it has something to do with our essential nature. The works included in this Gallery NAGA exhibit beautifully reflect these insights.

A notable studio furniture maker himself, two of Savage's own works are included in the show. His rather monochromatic Crazy Dave and the more colorful Perseus chairs combine an organic aesthetic energy with a sense of whimsy. Made of waxed English Sycamore, here abstract form morphs into a functional materiality. There is a witty elegance to these pieces that speaks to us not only as furniture but also as stand alone sculpture.

It should be noted that the overall exhibit layout at Gallery NAGA is very thoughtful and expressive. With only one exception, the exhibition's seventeen pieces of furniture are quite large. To balance the pieces, the Gallery Director Meg White and Associate Director Suzanne Manley did an outstanding job to showcase each element to its best viewing.

There is a solidness, a gravity, to the pieces by Garry Knox Bennett. His elegantly crafted Coffee Table welcomes visitors to the exhibition. Bennett has a a quirky nautilus symbol in a rectangle set in the top of the table. It is questionable whether this adds to the piece. However, his rosewood Vanity with Z Chair is an exquisitely elegant furniture grouping. The chair is after Gerit Rietveld's classic Zig-Zag Chair. Like mini-street markings, the set has brilliantly applied yellow satinwood, copper and paint detailing.

John Makepeace is one of the literal pioneers of studio furniture in Great Britain. For decades he ran a training college to teach others to design and create quality studio furniture. His pair of Zebra Cabinets in black oak and holly marquetry and burnished lacquer are very strong visual statements. It should be pointed out that an exquisite marquetry technique creates the zebra's stripes.

Makepeace's Trine Stool also made from 5000-year-old bog oak but with mulberry marquetry is the smallest work in the show, but has as strong a presence as any of the larger pieces. With its stylish silhouette, this stool has a sense of history to it, like it was taken from an archeological dig or discovered in an ancient dwelling.

The most visually eloquent piece in the exhibition is by Judy Kensley McKie. Her elegant Grazing Horse Table, part of a 2012 bronze (1/8) series, suggests a quiet pastoral motion in its sculpturally drawn form. Mckie's training as a 2-D artist (a paintiing major at RISD) is underscored by this piece. It is a physical drawing in air.

The horse's animal imagery is an example of her broad visual vocabulary. However, this is not a direct representation of a naturalistic animal, but instead a creature with spirit, movement and a natural yet quite abstract quality. Like many of her richest pieces, this horse conveys a sense of both hard and soft, serious and playful while being somehow simple but complexly nuanced.

Michael Hurwitz's appealing Twelve Leaf Resin Table is made from ash, wenge and epoxy resin. It is a surprising mix of media and creates a symbolic table of sustainable imagination. The leaf is a naturalistic horizontal surface, and Hurwitz uses the form to create a sensitively formed table top. His Teacup Desk made from ash with marble mosaic is a large round precisely crafted table based upon traditional Japanese forms. However, it suggests a large drum rather than a dainty teacup.

Peter Danko does furniture riffs based upon classic furniture forms from Mid-Century Modern to American Shaker pieces. By use of strange often industrial materials and well-known chair forms, he is making fun of the seriousness of furniture as well as celebrating their now classic designs. His NoCo2 Chair made of ash, Macassar ebony, steel, die cut automobile tires is a variation on an Eames bentwood chair. And Danko's Atmos Rocker in American ash wood with automobile seatbelt webbing is doing the same with a Shaker rocking chair style.

John Cederquist's Big Kanji (Kosode) Cabinet, created of mixed woods, aniline dyes and epoxy resin is the most boldly illustrative of the pieces in the show. Its highly decorative surface is reflected in a delicately carved airplane motif on the shelving on the inside. Its Asian visual presence cannotes a kimona as well as a war poster.

Jack Larimore's Abide made from paulownia and steel is the most primitive piece. It sensuousness derives from the pieces that create its form. His Endure the Dark, created from ash, maple, cherry, and fiberglass, appears to be an alien creature or giant insect. The way Larimore uses the materials in it inhances its geometric physical emotionalism.

Focused upon the contexturalization of his furniture to their surroundings, Thomas Hucker's work is about the relationship of a piece of furniture to its environment. In the Gallery NAGA exhibit, his Side Chair is created with wenge, a dark colored wood taken from African Rosewood. Hucker's Screen is made up of purpleheart, weeping branches, yew and lacquer. There is less surface and more opening than traditional screens. Thus, this screen visually integrates the environment with the piece. These both are minimalist sculptures that have rich textures and and unexpected surface treatments. However, Side Chair is a more resolved and elegant form than his prickly roughly hewn Screen.

In recent conversations with both David Savage and John Makpeace, differences and similarities were expressed regarding studio furniture both here in the US and in Gread Britain.

A founder of the British Crafts Council (1972), Mr. Makepeace created a school in the 1970s, Parnham College (initially named School for Craftsman in Wood), to teach skills and techniques to emerging studio furnituremakers. He was awarded an OBE by Queen Elizabeth II for furniture design. He stepped down as director in 2000.

Mr. Savage has been a cabinetmaker and furniture designer for over 35 years. Initially, he trained to be an artist, a painter, reading Fine Art at Ruskin School Oxford University, followed by a Post-Graduate degree at the Royal Academy in London. He learned cabinetmaking a few years later in two commercial workshops in Spitalfields, London, where he had to pay the principals for the privilege of working there and learning in a commercial situation.

Currently, Mr. Savage has a studio, the David Savage Atelier, populated by 22 individuals. Some are paid students who are there to learn from the master. Others are his assistants. He runs not a school or college but an "Atelier" where everyone from master craftsman through journeyman to apprentice is learning at different levels and from each other.

Many American studio furnituremakers have a studio setting with assistants and sometimes apprentices as well. Rarely, however, do they create their own schools or colleges. Our "apprentice system" is generally less formalized and initial technical as well as aesthetic education is connected to an institution--a college or university sertificate or degree program. Then individuals either work with some master craftsman, factory or just by themselves to define and refine their work.

Artist/designers of furniture work in many different ways. Some work a project from start to finish, drawing to completed object while others work projects up to certain points and have others complete various steps. This would include making design drawings and specifications or creating mould preparations and contracting them to others or facilities. Refinements and finishing could take place by the individual furnituremaker or only under their supervision. Ways of working vary greatly depending upon materials used and the individual practitioner. This is true in America or Britain.

Now John Makepeace works alone. His designs are now produced, fabricated or constructed with assistance from his former students and their own facilities. Working as part of a team on his own furniture, David Savage mentioned that he is looking to step down from his current responsibilities but is having trouble finding an appropriate designer to take over. Design is always key.

At Gallery NAGA, there is a joyfulness and a human optimism to the superior examples of studio furniture in Furniture With Soul. This exhibition is a celebration of art and craft, design and form, materials and textures. Each piece shown demonstrates the quality and resonance of the elegantly crafted object. Furniture with Soul is an exhibit to enjoy and by which to be visually enriched.

Furniture With Soul, Master Woodworkers and Their Craft, by David Savage, Published by Kodansha International Ltd., 232 pages, 2011, can be purchased at Gallery NAGA.