The Goat, or Who is Sylvia? by Edward Albee 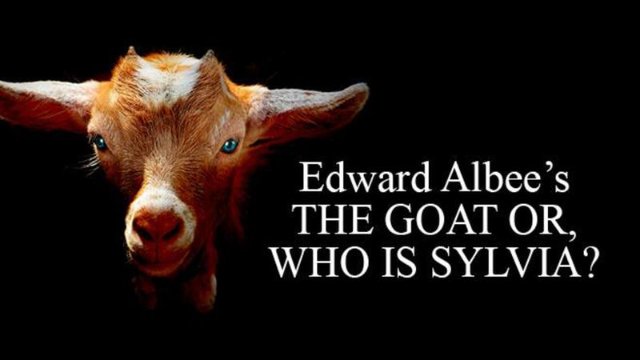 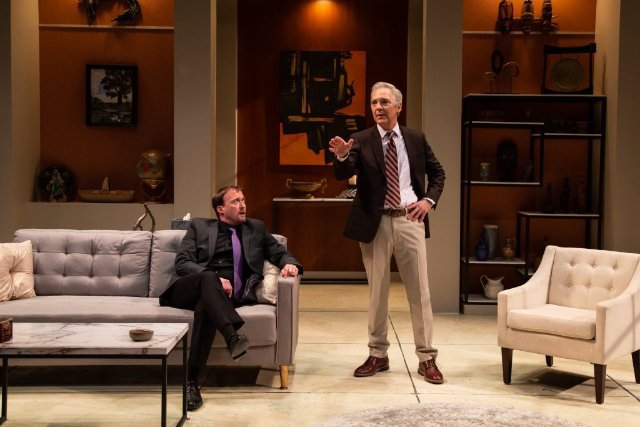 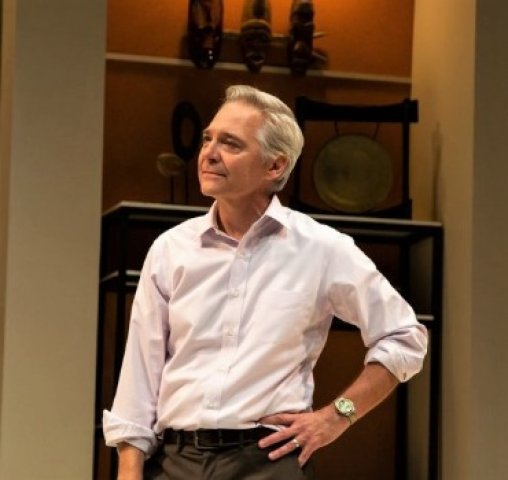 Martin turning 50 has a midlife crisis. 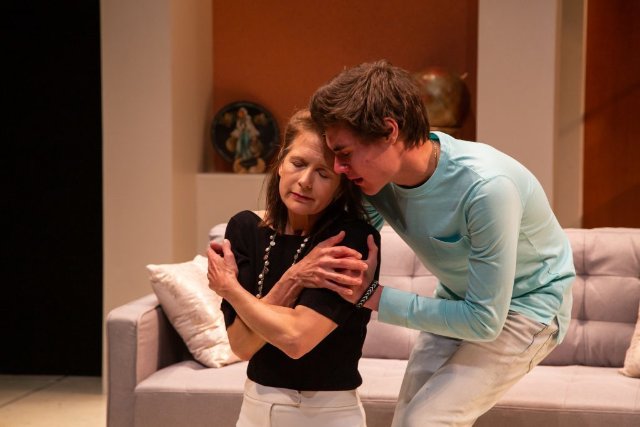 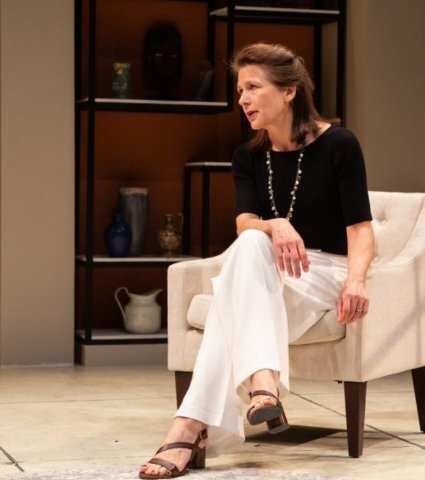 Stevie (Jennifer Van Dyck) reacts to her husband having an affair with a goat.

With his 2000 play, The Goat or Who Is Sylvia? Edward Albee (1928-2016) had a lot on his plate. The 2002 production with 309 performances and 23 previews won the Tony Award for Best New Play. It ranks with the best works of one of America’s most renowned playwrights.

Yet it is regarded as “problematic” and a career defining challenge for directors and actors.

The mandate for Albee was to examine the fundamentals of tragedy as defined by Aristotle. There are classical references laced through the play. The title refers to a song in Shakespeare’s Two Gentlemen of Verona. The Bard often borrowed from the Greeks. Albee subtitled the play “Notes toward a definition of tragedy.”

On the occasion of turning fifty there is loss and gain. Entering a room, as he comments to his wife, he can't remember why. He tells Ross that he may have early onset Alzheimer's Disease. The friend replies that "If you can remember the name of the disease you don't have it." But there are other problems. Big time.

The play starts at an understated, enervating pace, then cranks up to a full scale tsunami. By then plates are flying as  metaphors of shattered lives that, like Humpty Dumpty, all the king’s horses and all the king’s men can’t put together again.

The spare, elegant, minimalist, Bauhaus-inspired set by Randal Parsons lulls us into a false positive of tranquil, dull, upwardly mobile success. The living room is neat and a tad too orderly. There are book shelves with bourgeois collectables soon sent flying. They include African sculptures, a cliché of racial insensitivity and post colonialism. We view a blatantly uninspired interior design for the home of an architect who, at a young age for lifetime acheivement, is being awarded the prestigious Pritzker Prize. He is also designing an entire city.

That neat and orderly, somewhat boring home and lifestyle, is a visual cliché for Albee’s over-the-top metaphor of how things fall apart. Not much of which, by the by, is even vaguely credible. The language is straight up. The playwright, however, is anything but. Lots of archly theoretical hurly-burly is hurled at us like all those shattered tchotchkes and overturned furniture.

During a lull, when his freaked out wife has departed for parts unknown, we see Martin rather pathetically trying to tidy up.

There were early clues as Stevie notes that her husband had a peculiarly earthy aroma when they embraced. There is a woman’s business card in his jacket pocket. During 25 years of marriage he has been numbingly ordinary and faithful to the love of his life. But wives have an uncanny sense when things go wrong. Asked if he is having an affair he answers yes, with Sylvia, a goat. She laughs that off as too ridiculous to take seriously.

The goat, in this case a Judas Goat, is a trope that leads us into the slaughter house of tragedy. Albee explores tragedy as evolved from Dionysian revels of nymphs and satyrs (men who were half goats). Albee layers references until they collapse like a house of cards in a shit-storm finale.

During an argument with Billy the kid blurts out a reference to Greek tragedy. His father is impressed. The response to which is that he is being well educated. With a dig, the son thanks his father for being sent to a boy’s school. The father is a semi-tolerant, suburban, upper-middle-class liberal. Still he blurts out that Billy is a “faggot.”

Albee, a gay playwright, tosses around nuances of hypocrisy. What right does a sicko who shags goats have not to tolerate men having sex with men? In a denouement, late in the drama, Martin accepts Billy’s sexuality. In the confusion of adolescence, with a kiss on the mouth, his father is just another man. Billy has already informed us that he wants to have sex with anyone and everyone. For his part, Martin discloses a tale of a man (most likely himself) who got a boner while holding an infant. Billy rightly wants to know if he was that infant.

Sexual deviance is a driving force in this off-the-rails drama. David Adkins, in yet another stunning performance, makes a compelling case for an otherwise normal, middle aged man to fall completely and udderly in love with a goat. There was something in her eyes, and how she looked at me, he whimpers. We almost want to believe him. Albee is intent on moving the goal posts defining boundaries for love and lust.

Stevie is justifiably enraged at sharing her husband with a goat. Her ripped response is understandable while his is anything but. Trying to explain the merits of barnyard romance only makes her ever more furious.

Martin, who can’t admit that he has a problem, has joined a support group. As he describes a man and his piglet, or a woman with a dog (it was her calling card in his pocket), with each “disgusting” disclosure there is another shattered plate. He describes the really ugly guy who gets off with a goose.

It is implied that middle aged men having affairs is quite acceptable. Particularly with home, children and security at stake wives tend to cope. Until now, Stevie has been the love of his life. He proclaims that she still is. But now he also loves Sylvia, a goat. No wife can or should compete with an animal as “the other woman.”

Does she bleat when you make love Billy wants to know? There is guilty laughter when Martin answers that sheep bleat and that Sylvia is a goat.

In another zinger, of which there are many in this tragic comedy, Billy wants to know if his father is cruising live stock? Ross, the “Judas” best friend argues that his life and career will tumble down, when and if, discovered pants down, kneeling behind dear Sylvia. His wife wonders if Sylvia’s tits drag through mud and shit. This is the “perfume” of her humiliating rival.

As Grace Slick sang we all “need somebody to love.” Be it man or beast. Truly a dog is a man’s best friend. For now let’s stick to goats.

Borrowing from his greatest work Who’s Afraid of Virginia Woolf all four characters in this play are vile in a fascinating outré way. Albee is masterful in creating characters we love to hate.

In particular, I despised the character of Ross (Josh Aaron McCabe). Everything about him was infuriating. As a TV personality he sets up a camera to interview his “best friend.” His off camera tone is all wrong and not at all what one would expect from NPR or PBS. There is skill in cajoling an interview. Martin is distracted and Ross packs it in but insists on getting to the bottom of the problem. Pressing on there are constant assurances of friendship. Then comes the sucker punch.

Ross recalls a night when they shared a hotel room with hookers. Martin couldn’t “perform” because he was dating and in love with Stevie. Awkwardly, Martin remembers that his friend’s date was named Alice. Oops. That’s the name of Ross’s daughter. There is a best buds theme of frat boy sexism and white privilege.

When the truth is finally blurted out Ross violates friendship and trust in a letter to Stevie. It’s a complete betrayal.

Faced with devastating  humiliation Stevie devolves into Medea/ Furies mode. It’s a tough role for Van Dyck. She morphs from perfect wife to vengeful harridan. Director Eric Hill has punched her up to a shattering, unhinged, bonkers category five hurricane. With professionalism it is remarkable that she reaches that level of intensity each night through the run of the play.

Most impressive, for me, was the masterful way in which Adkins navigates the twists and turns of a complex character. What’s missing, however, is any hint of the genius and creativity that earns one The Pritzker Prize.

In the first third of the ninety minute play the performances of Adkins and Van Dyck, were stagey, formulaic and excruciating. It is uncomfortable to see actors so obviously acting. Every overly calculated gesture came from their thespian tool kits. In media res, however, every shred of naturalism was abandoned. We become enthralled by mayhem and mishegoss.

There is a nice moment when she is shattering everything in sight. Early on Billy, an adolescent, was sent to his room. All the smash and clatter has drawn him back to the living room. He removes a pot from a shelf. He gave it to his Mom and is taking it to his room for safekeeping. A child reminds a parent that there are limits. It’s a delicious Albee touch.

As the walls of domesticity collapse around him the measured performance of Silverstein’s Billy offers a glimmer of hope. He has learned valuable life lessons.

Albee, however, takes everything off the table. In the end there is no hope and that’s truly tragic.  As with Sartre’s earlier Huis Clos, for Albee, there is no exit.