Festival Theme is Carnival After Campra 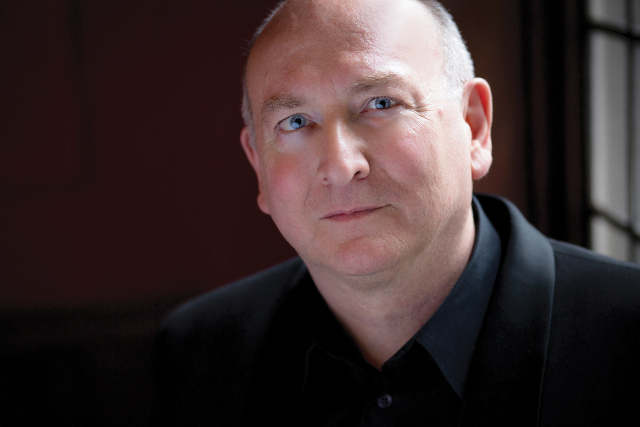 BEMF co-director Stephen Stubbs, who will be conducting the orchestra for Handel's "La Resurrezione" 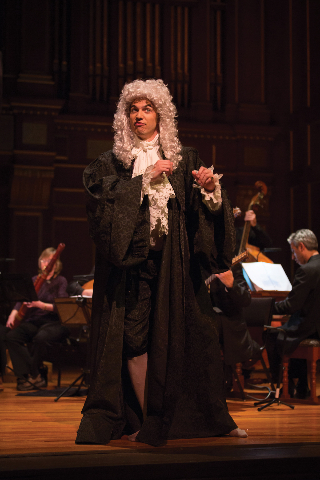 Bass-baritone Douglas Williams, who showed his comic chops in the Pergolesi double-header in 2014, shown here, will repeat the role this year. The BEMF will take the pair of intermezzi to the Mahaiwe Performing Arts Center in Great Barrington. 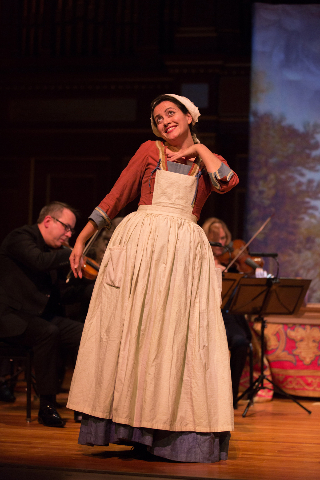 Soprano Amanda Forsythe does her best job as an innocent maid in the Pergolesi intermezzi, being repeated this year after their 2014 premiere. The evening of comic opera will travel to the Berkshires.

Every two years when the Boston Early Music Festival sets up its tents in Boston, welcoming the merry band of early music fanatics from around the world who regularly travel here by boat, plane, train, automobile, trolley and bus to perform and to listen, it offers an education along with entertainment. It might be the entertainment that brings back its audiences year after year, but savvy attendees are probably turned on as much by the opportunity to learn. Indeed, pleasure and knowledge are so tightly intertwined in most BEMF programs that they are impossible to extricate.

The festival lasts a busy week in June, the 11th to the 18th this year, and its programming of operas, concerts, lectures and other events is so dense – concerts start as early as 9 a.m. and the last one concludes around midnight – that unless one is able to clone oneself it would be impossible to attend more than a sampling, and even cloned it would be a challenge. But many try, racing from concert hall to church to theater as one concert ends in order to catch another scheduled to begin. (The full schedule is at www.bemf.org.)

As the centerpiece will be a BEMF tradition, a fully staged opera that adopts as closely as possible the conventions of 17th or early 18th century theater. This year it is a true rarity, André Campra’s “Le Carnaval de Venise,” an opéra-ballet that premiered in 1699. Not only is it a work that has never been performed in North America, but it is of a genre, the opéra-ballet, that is seldom tackled these days on these shores. (It will be performed four times, June 11, 14, 16 and 18, at the Emerson/Cutler Majestic Theatre.)

Those who know the French opera tradition expect a ballet at some point. When they composed for Paris, even Donizetti and Verdi were compelled to write ballet music (definitely not Verdi’s strong point). That tradition started before Campra (1660-1744), but he refined it.

“The opéra-ballet was Campra’s contribution to French opera,” BEMF director of marketing and publicity Brian Stuart said in a telephone interview. “Although dance was always important in French opera, Campra integrated dance and music in a unique way.” Stuart added that the production gives the festival the opportunity to showcase its dance company, newly expanded to ten. For those who have not seen much Baroque dance, it should prove to be an informative experience – and, one hopes, a pleasure. By presenting it, the BEMF hopes to expand its audience to include more dance fans.

So who is Campra? Stuart said he’s “a hidden gem,” if largely unknown, an important figure in the development of French opera, the link between Jean-Baptiste Lully (1632-1687) and Jean-Philippe Rameau (1683-1764). “There’s such a narrow bandwidth for early music, there’s a wealth of material still to be discovered,” Stuart said. “Campra is a good example. The focus in the rediscovery of early French opera started with Rameau, then there was room for Lully, and only now are we getting to Campra.” Stuart said that Campra, the man once called “the toast of France,” with six or seven opéra-ballets as well as a number of tragédies, is still in the early stages of rediscovery.

Campra’s theme, as his title tells us, is the carnival in Venice. Stuart said Campra aimed to create a spectacle, and the BEMF will try to do him justice, so that in addition to the dance, there will be lots of masked figures on stage and of course colorful period- authentic costumes and sets. There will also be an opera within the opera, a short opera on the Orpheus/Eurydice theme – a BEMF subspecialty – that will be sung in Italian. (The opera itself is sung in French.) The conceit being that these characters are in Venice for the carnival and attend an opera, which, of course, is in Italian. In a recent video of rehearsals, BEMF co-director Paul O’Dette said it might be fairer to call “Le Carnaval” a Baroque musical than a Baroque opera.

The casting for this French spectacle is attractive – the central quartet of lovers are sung by four popular BEMF regulars, soprano Amanda Forsythe, soprano Karina Gauvin, baritone Jesse Blumberg and bass-baritone Douglas Williams. Orpheus will be sung by tenor Aaron Sheehan, the BEMF’s go-to Orpheus, who has previously sung the role in operas by Monteverdi and Charpentier.

As I said, it promises to be both an education and a pleasure.

"Le Carnaval de Venise” is just the centerpiece around which the rest of the festival revolves. Altogether there are 18 other official concerts; two mini-festivals, one for keyboard, the other for organ; a repeat of an-off year chamber opera; the exhibition and sale and more unofficial but affiliated “fringe” concerts than you can count. And as it has in past seasons the festival will bring an opera program to the Berkshires, the Mahaiwe Performing Arts Center in Great Barrington (June 24 & 25).

Two presentations should appeal to lovers of opera and vocal music. This year the festival reprises (June 17) the pair of intermezzi by Giovanni Pergolesi it first presented Thanksgiving weekend in 2014. These little Neapolitan comedies filled the intermission gaps between acts of Pergolesi’s serious operas, which no one ever does anymore. One of them, “La serva padrona,” is probably Pergolesi’s most often done work. Featuring centerpiece opera singers, Amanda Forsythe, Douglas Williams and Jesse Blumberg (along with Erica Schuller) on an off-night, the program promises to be silly fun. This is the opera the festival will take to the Mahaiwe.

The other vocal highlight, Handel’s “La Resurrezione” is more serious in intent, but not a bit less joyful. Written for Easter when the 23-year old Handel was resident in Rome, the oratorio is full of the infectious melodies and lively rhythms Handel became well known for later in his operas, here with a later-unsurpassed youthful insouciance. Stuart said that the work, which is a true pleasure, was an example of Handel, “a shameless young man,” showing off, “throwing out everything he had to make his place in the Roman scene.” This is the annual concert the BEMF orchestra, conducted by festival co-director Stephen Stubbs, puts on when it’s not in the opera pit. Among the singers are Karina Gauvin, Teresa Wakim, Aaron Sheehan, Christian Immler and Kelsey Lauritano (June15).

The theme of the entire festival this year, because of the Campra opera, is “Carnival,” and a number of other programs will address that tradition – or at least play music Venetian in origin or theme. The Italian group Micrologus will give a concert titled “Carnivalesque: Sex, Lies and … Musical Tales in 16th Century Venice” (June 14). You can’t get any closer to the theme than that. I heard the group play in a previous festival and they were dynamic. Just a tad-bit off-theme is the program the Viennese group Cinquecento is presenting, “Canti Carnaschialeschi: A Florentine Carnival” (June 16). Florence is known as a more sober city than anything-goes Venice, so it will be interesting to see how its carnival music differs. And a little off-theme in another direction will be the brass ensemble Concerto Palatino’s concert, “Echoes of Saint Mark’s: Instrumental Music from the Musical Chapel of the Doge” (June 17). Even in Venice, which defied the Pope in Rome on more than one occasion, religion did play an important role.

Most presenters politely ignored the stated theme, however, which means that there will be all varieties of early music – and even a little Mozart – and in the context of the festival, Mozart is a modern composer. (Kristian Bezuidenhout and Rachel Podger will perform his sonatas for fortepiano and violin (June 16).)

You can choose from early folk and dance music from Middle Europe (Solamente Naturali, June 12); sacred music by Mark-Antoine Charpentier, whose operas the BEMF has presented in the past (Ensemble Correspondances, June 13); Renaissance music from the British Isles (Ayreheart, June 12); Latin American guitar music (Tembembe Ensamble Continuo, June 15); and “Music for Drinking, Loving, and Lamenting” from Germany (Quicksilver, June 17). Whew!! And that cursory list leaves out such popular groups as the vocal precisionists The King’s Singers (June 12) and newcomers Nevermind (June 16), which Stuart cited as a group with up-and-coming harpsichordist James Rondeau not to be missed.

Let’s not forget the Exhibition, taking place as in years past at the Courtyard Marriott Downtown (June 14 to June 17), where you can pick up that viola da gamba you always wanted or at least, if you’re still using old technology, an armful of CDs.

And for specialists there’s the mini-festivals for organ (June 15) and keyboard (June 16). And there will be lectures and masterclasses and demonstrations here there and everywhere.

As for the Fringe festival concerts: I’m too tired to go there – you can find the full list, sometimes five concerts a day – on line. Indeed, it is best if you’re seriously interested in making the best use of your time to check out the festival’s website: www.bemf.org.