Centerbeam of CAVS/MIT Reintroduced at ZKM 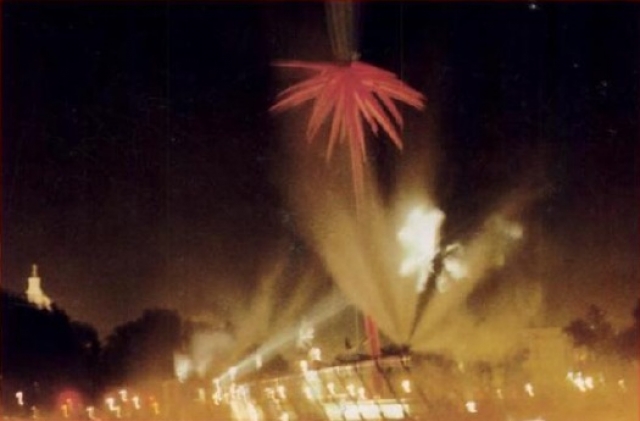 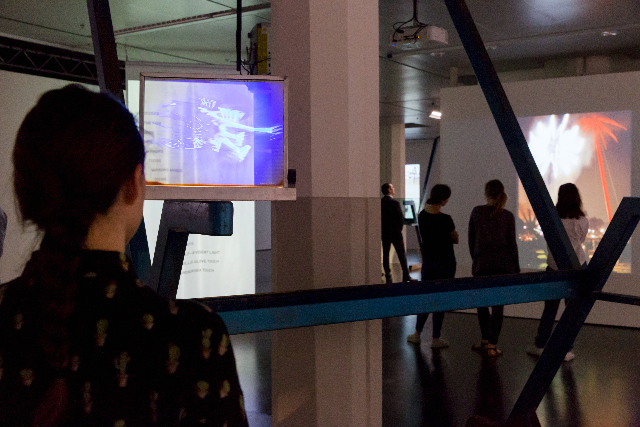 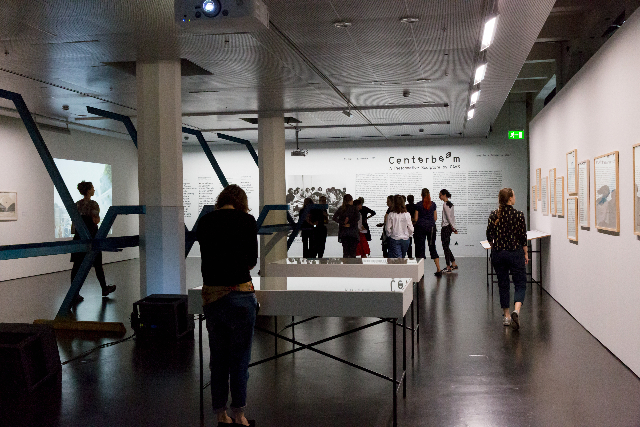 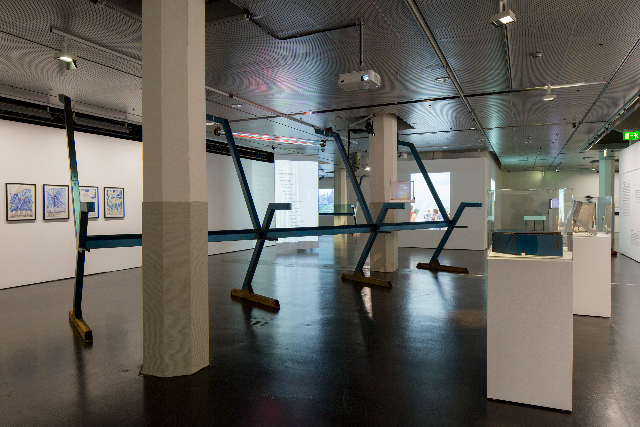 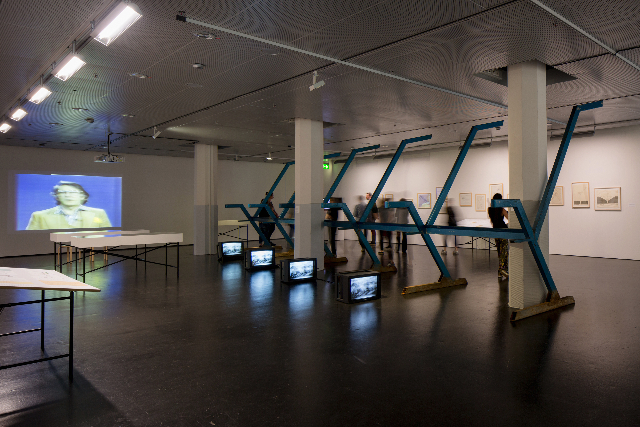 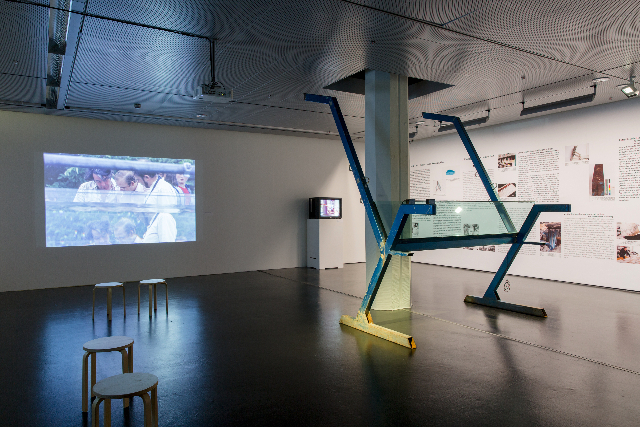 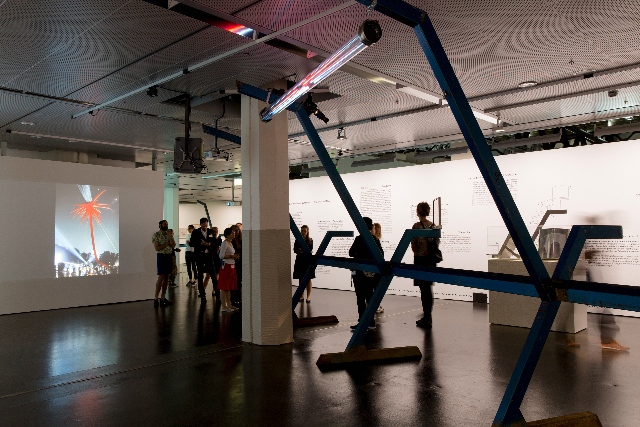 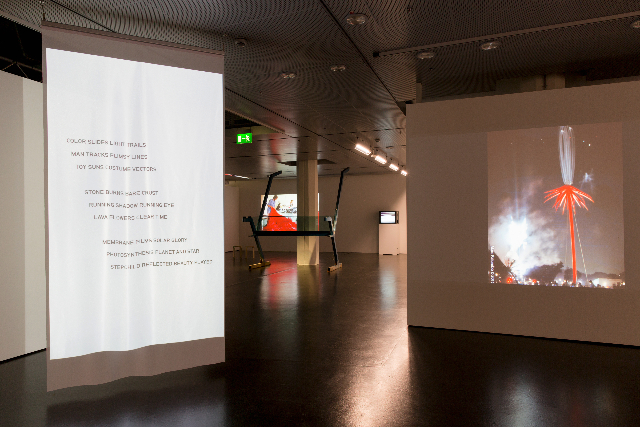 Celebrating the 40th Anniversary of Centerbeam, A Performative Sculpture by CAVS

At the Center for Art and Media Karlsruhe, until October 1st, 2017

It was quite a surprise, when we recently received a press release by the Zenter für Kunst und Medien (ZKM), Karlsruhe/Germany, announcing: Celebrating the 40th Anniversary of Centerbeam. Had this unique, collaborative sculpture by artists of CAVS/MIT actually been reproduced on museum’s grounds? Rumors and talks about a new version of Centerbeam were in the air for a long time. After all, much of the existing hardware, like many stanchions, had been shipped to Karlsruhe. At first glance, the press release and short videos online did not clearly indicate to me what had actually been accomplished. Here it is:

In concert with documenta 14 in Kassel, Germany, the Center for Art and Media Karlsruhe, ZKM,  reintroduces ‘Centerbeam,’ the iconic 144 ft long performance sculpture by artists of the Center for Advanced Visual Studies at the Massachusetts Institute of Technology (CAVS/MIT). Centerbeam was prominently placed at documenta 6 in 1977 in the Karlsaue park, close to The Orangerie, a magnificent 18th Century castle.

However, ZKM is exhibiting indoors several units of the stanchions with Equivocal Forks holograms and poetry, in addition documentation and slide projections of historical photographs that bring much of the fun, effects and art of a nearly 44 meter long sculpture back into focus.

Centerbeam was built again on the Washington Mall in Washington, D.C. the following summer. Next to the National Air and Space Museum was the only vacant field, and we enjoyed generous assistance from the museum staff. The huge Washington Mall hosts several other museums, cultural institutions and monuments. Among them are: The National Gallery of Art and Sculpture Garden, The Hirshhorn Museum and Sculpture Garden, The National Museum of the American Indian and the Smithsonian Institution Building, The Castle. The newest museum, the exquisite National Museum of African American History and Culture, opened in 2016 in the vicinity of that ‘field,’ where Centerbeam once delighted and entertained 100.000 visitors big and small.

During the day children and adults played in Kassel and Washington, D.C. with a Water Prism (Lowry Burgess); admired a Brine/Ice Line (Carl Nesjar), when hot weather did not overpower the component; and visitors were able to grasp Equivocal Forks (Harriet Casdin-Silver) in mid-air. These were attached solar tracking holograms. The Sound Shuffle/Light Walk (Chris Janney) delighted visitors in Washington, D. C. and a Neon-Argon Line (Alejandro Sina) became incrementally more visible as the day turned to dusk.

Centerbeam would come to life during evenings by emitting steam (Joan Brigham) onto which laser drawings (Paul Earls, Gyorgy Kepes) and films/videos (several artists) were projected. Then, during scheduled events, inflatable sculptures (Otto Piene) lifted high into air  above the structure, and an especially large evening crowd experienced two performances in Washington, D.C. of "Icarus,"  a sky opera, with live and electronic music (Earls, composer; Piene, inflatables). Centerbeam would perform day and night all summer long. These were just some of its elements. In total, 21 artists and a number of engineers and technologists, then on the forefront of the latest developments, made Centerbeam possible.

Following is the Press Release of ZKM:

With its exhibition »Centerbeam. A Performative Sculpture by CAVS«, the ZKM | Karlsruhe marks the 40th anniversary and, parallel to this year’s documenta, recalls the legendary contribution of the Center for Advanced Visual Studies (CAVS) at the Massachusetts Institute of Technology (MIT) to the documenta 6 in Kassel in 1977. The spectacular outdoor installation, which was almost 44 meters long, was a joint project by CAVS Fellows based on an idea by the artist Lowry Burgess under the direction of Otto Piene, and designed at MIT. In 1978, a second version was exhibited at the National Mall in Washington, DC. The installation utilized the at that time newest artistic technologies, such as lasers, holography, steam, neon, video, and inflatables to create a multimedia “art machine” (Manfred Schneckenburger), an “aqueduct into the 21st century” that propagated the fruitful collaboration of artists, scientists, and engineers.

In 1967, CAVS was founded at the MIT by György Kepes, an artist and influential theoretician who had previously taught at the New Bauhaus in Chicago. A close colleague of László Moholy-Nagy, Kepes was a strong advocate of collaboration between the arts and sciences. Under Kepes’ chairmanship, and since 1974 under his successor Otto Piene, CAVS awarded Fellow scholarships to artists who experimented at the Center with scientists, technicians, and engineers in various projects situated at the interface between art and innovative technological developments. With this unique working environment, in the field of new media, CAVS was a model for the conception of the ZKM | Karlsruhe in the 1980s.

Over recent years the ZKM has endeavored to produce and overhaul the scientific documentation on »Centerbeam« and its kinetic, performative, and participatory modes of functioning. The core idea was to create together with the artists a Centerbeam 3, an updated version of the historic installation. With the aid of archive material and surviving remnants of the original Centerbeam the current exhibition explores possible methods of such a reconstruction with regard to contemporary issues of media conservation as a case study reflecting on and relevant to the restoration of the media art collection of the ZKM.

We look forward to seeing you there!

Finally, I spent years at CAVS, promoting and working with many of its nearly 100 projects during Otto Piene’s tenure as director. Centerbeam holds a special place in my heart and memory and an outdoor recreation or adaptation of this unique sculpture would be fantastic!