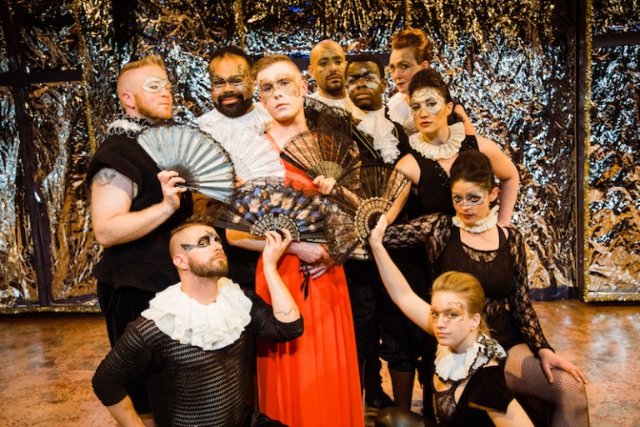 The ensemble. Lovejoy as d’Eon in red. Photo by Chris Popio.

Trap Door Theatre takes on the contemporary issue of gender identity with the story of a famous soldier, diplomat and spy in 18th century . Chevalier Charles-Genevieve-Louise-Auguste-Andre-Thimothee d’Eon had a distinguished career working in and for the court of King Louis XV of . After this long career, Monsieur d’Eon (played by David Lovejoy) announced that she is a woman who had disguised herself as a man for her entire life.

Was she was lying all along? Was she a man pretending to be a woman and is now saying she was a man? In either case, d’Eon was brave to give up the advantages of manhood and take on the riskier role of a woman in the 18th century court milieu. The 90-minute biodrama is sexy and startling, but fails to make clear how d’Eon’s connections all came about. But perhaps that’s best left to historians. As theatergoers, we can enjoy the show.

From here on in this review, I will refer to d’Eon by feminine pronouns, as she did at the end of her life.

Trap Door Theatre’s production of Mark Brownell’s Monsieur d’Eon Is a Woman, directed by Nicole Wiesner, is a striking example of the company’s highly stylized, choreographed, madcap productions. Eleven performers are in constant motion. Most of the performers play a number of roles and you have to pay attention to be sure which character Dennis Bisto, for instance, is playing at any given moment. (He plays Louis XV, the Marquis de Sade, Rousseau and the Prince of Wales.) The story moves from to to to and back to with a constantly shifting cast of historical figures.

D’Eon appears first as a young boy doing chores in Tonnerre in north central . Jeanne d’Arc (Ty Easley) comes to her as an apparition and tells her she is who d’Eon will be one day. Jeanne appears to d’Eon at several other times.

D’Eon is taken to meet the French king, where she is inducted into the King’s Secret, a clandestine order of royal intelligence operatives. Among the characters at the French court are the foppish Macaroni Brothers (Emily Lotspeich and Nora Lise Ulrey) and a sexy Madame Pompadour (Maryam Abdi).

D’Eon is introduced to the court of the Empress Elizabeth I of (Ann Sonneville, who also plays Marie Antoinette, and a bookie).

The career of d’Eon takes her to the Franco-Prussian war, where the combatants engage in pantomime battle, with swords. Back in , Louis XV awards her the Order of Saint Louis for bravery in battle and grants her the Chevalier title. Louis sends her off to the Court of St. James, where she and King George III (Bill Gordon) play hopscotch while engaging in negotiations. After living as a man for nearly 50 years, d’Eon confesses to being a woman and lives as a woman for the rest of her life. (She died at 81 in 1810.)

Was the androgynous d’Eon a man or a woman? After her death, doctors examined the body and found “male organs in every respect perfectly formed,” but also some feminine characteristics.

Wiesner’s direction and J. Michael Grigg’s staging are distinctively Trap Door. The stage is surrounded in silver wrapping with a few black doorways. Rachel Sypniewski’s black, white and silver costume palette suggests the elegance of the 18th century court. Only d’Eon wears another color: the two dresses she wears at various stages of her identity are brilliant red. Zsófia Ötvös’ makeup design is an essential part of the costuming because each character is masked with elaborate makeup designs.

The large, diverse cast is uniformly strong. Lovejoy plays d’Eon subtly; her character is a real person with fears and failures mixed with her successes as a soldier, courtier and spy. Sonneville and Bisto also are excellent in their multi-faceted roles.

Brownell’s script is written in a combination of courtly language and contemporary slang. When Louis XV first appears after an elaborate introduction by a courtier, he says, “Shut upl That’s enough cowshit for today. Orders of the day. Hurry up. My time is precious. You people should be paying me more for this thankless job. Well, what are you all staring at? You think it’s easy being King?”

Mark Brownell is a Toronto-based playwright and co-artistic director of the Pea Green Theatre Group with his wife and partner, Sue Miner. Monsieur d’Eon Is a Woman was first produced there in 1999. His other plays include The Barbeque King, The Martha Stewart Projects, Playballs, High Sticking-Three Period Plays, The Chevalier St. George, The Storyteller’s Bag and The Weaving Maiden.

If you find Monsieur d’Eon’s story fascinating, you can read details about her life on her Wikipedia page. You can also delve into her history in Monsieur d’Eon Is a Woman: A Tale Of Political Intrigue and Sexual Masquerade by Gary Kates, professor of history at , originally published in 1995.

Monsieur d’Eon Is a Woman continues at Trap Door Theatre, in Bucktown, through June 30. Tickets are $20-25 for performances Thursday-Saturday with two-for-one tickets on Thursdays. (That’s $10 each—cheaper than a movie and much more fun.) Buy tickets online or call 773-384-0494.