Up for ten Tony Awards 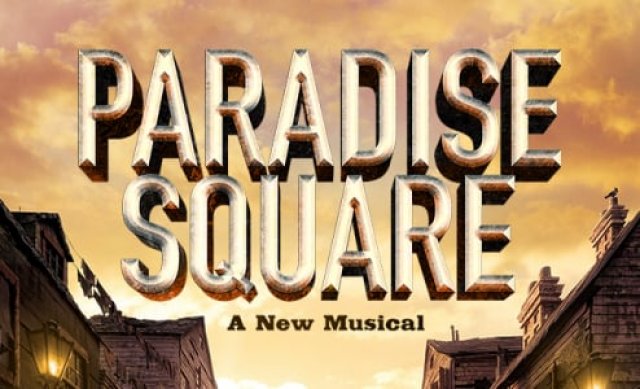 Paradise Square directed by Moises Kaufman with choreography by Bill T. Jones is an exuberant, refreshing and intelligent presentation of a significant moment in our history.

It has been nominated for ten Tony awards, among them best musical, best choreography by Bill T. Jones and best actress in a musical,  Joaquina Kalukango.

The book is written by Christina Anderson, Craig Lucas & Larry Kirwan. Paradise Square gives us a meaningful look at the relationship between the Irish famine survivors and the growing population of free Black Americans in New York City.  Remember that after passing through Ellis Island paperwork, immigrants stepped onto American land in lower Manhattan, their dreams realized: they had arrived. They needed to go no further.

We begin in the present with a scenic projection  created by Wendall Harrington and Shawn Edward Doyle. The sequence offers a black and white images of a busy intersection near Chatham Square, and then a vintage map. The montage leaves us facing the corner of Baxter Street north of the huge gray Court buildings.

A Black woman, Nellie O'Brien (Joaquina Kalukango) steps out of the past, “ I used to live here...” she tells us.

The scene is set.  It is 1863. We are in the Five Points section of Manhattan at Nellie's Saloon, Paradise Square. With a well-conceived set by Allen Moyer. evocative of both an old fashioned bar room and tenement fire-escapes, we are drawn into the lives of the men and women who live in the neighborhood.

Nellie O'Brien is the owner of the establishment. Her husband, an Irishman Willie (Matt Bogart) in a Union uniform, is on his way to the front to fight in the all Irish 69th battalion. He and his pal Lucky Mike Quinlan (Kevin Dennis) set off to war. Willie's sister Annie (Chilina Kennedy) and her husband, the Reverend Samuel Lewis (Nathaniel Stampley) are part of the family farewell. Both couples are racially-mixed.

In this poignant moment of personal love and prayer for a successful return, many of our cultural biases are overthrown. Black American's did own property in 1863. The immigrant Irish were a brave and valiant pro-Union fighting force. There were black ministers. And Black and white New Yorkers lived in peace and harmony, intermarried and worked to better their lives. These unskilled New Yorkers worked at the very bottom of the labor force as stevedores, poorly paid in often dangerous conditions. We see dignity and faith even in the face a poverty and loss.

Five Points was a real place, a neighborhood  “melting pot” from which the ingredients of vaudeville, tin-pan alley and tap dance would emerge.Dancing and music keeps the fictional Paradise Square in business.  Dancing holds our attention. With an ensemble of more than 20 dancers, male and female, African American and Irish,  the stomping beats of a musical genre in the making resonate.

The music created by Jason Howland with additional tunes by Larry Kiran, who conceived this work, and lyrics by Nathan Tysen and Masi Asare, two musical traditions weave together.

Stephen Foster, who was in fact known to have frequented the Five Points area for inspiration, is included disguised as Milton Moore (Jacob Fishel) a piano player at the saloon.

This musically fertile time erupts in the middle of the Civil War. The streets of New York  became their own battleground.

New York was the major cotton shipping port in the North. Many of its most wealthy shippers and politicians were openly pro-Confederacy. Efforts to keep wages low set one group of workers off against another. Politicians retained their power by playing off the economic insecurity of Black and white workers against each other. Corrupt politicians and slave-bounty hunters were a reality in the lives of New Yorkers. The idea that freed slaves would cause the immigrants to lose their already meager jobs had been circulating in the pro-Confederate press for three years, at the same time the Mayor, was openly calling for New York to secede.

Paradise Square saloon served as a stop on the underground railroad, and harbored runaways. African American businessmen and clergy assisted those seeking freedom. Success in locating the whereabouts of a missing traveler Angelina Baker ( Gabrielle McClinton) indicates the strength of their network.

The drama gives us just enough truth to understand the social realities of the time and place. Romance, love and family ties hold the community together.

Reality intrudes when the draft for the Union Army is announced. Three painful caveats rip harshly into the lives of our characters. Citizens and immigrants will be called for the draft, but a payment of 300 dollars can buy an exemption. Blacks were not permitted to serve, regardless of their status or their willingness to fight for the North.

Outrage pulsates through the community. Was this really a rich man's war fought by the poor? Are the tensions being fed by others?

Ten days after the defeat of the Confederate army in Gettysburg, three days of rioting and civil unrest In New York resulted in hundreds of casualties. Telegraph communications were cut. Police officers were attacked. The actual attack on the draft centers was only a brief part of the event. Expensive stores and wealthy homes were looted.

African Americans were targeted. Many were murdered on the streets and their businesses destroyed. About a third of the Black population of Manhattan left after these riots. They moved to Brooklyn,and settled in the village of Weeksville, built by freedmen in the 1840's.

Kalukango leads the chorus in the face of despair.  In truth the neighborhood spread out from Five Points to Chinatown, Little Italy, The Lower East Side and has remained a place where immigrants and migrants have settled and struggled side by side, and stirred the cross-cultural cauldron for the next hundred and fifty yeas.

Paradise Square is up for ten Tony Awards. Joaquina Kalukango gets a nod as leading actress in a musical.  Bill T. Jones has tough competition from Michael Jackson.

The musical is engaging on many levels.  It calls our attention once again to an important and often overlooked and shameful corner of American history: the draft riot of 1863.  Yet Paradise Square delivers a message of hope and dignity: if we can emerge from division and strife and see where our common interests lie, we can, "save our home."