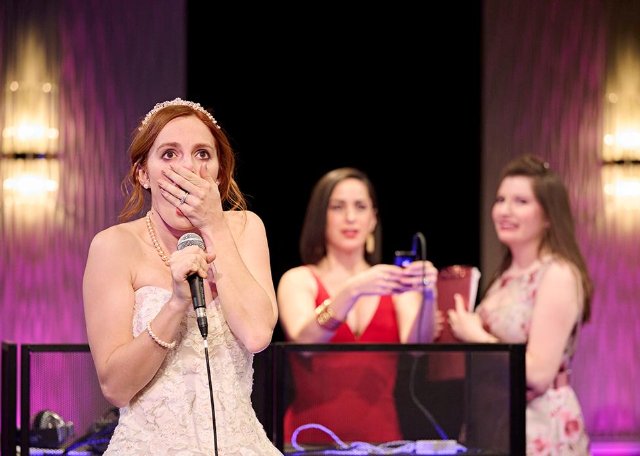 Growing up, many girls spend hours imagining their “perfect wedding” and then, when the time comes, they spend hours putting that plan in place. But is any wedding “perfect”?

Zoey’s PERFECT Wedding now playing at TheaterWorks in Hartford through Sunday, June 5 looks at what happens when the “perfect” part of the wedding doesn’t happen. Playwright Matthew López has combined humor (some farce, some slapstick) with an insightful understanding of our need for human connection and love.

The result is both funny and poignant.

It is Zoey’s wedding reception and situated at a table far from the action are three college friends. The only advantage to this out-of-the-way location is that nearby is a bar. The other bar at the reception is jammed.

At the table are Charlie and Rachel who are married and Sammy. Rachel is one of the top wedding planners in NYC; Charlie works in finance and Sammy has his own sports agent/management company. As the chitchat begins, Rachel comments on the tackiness of the wedding and Sammy talks about his multiple sex partners despite being in a committed relationship with an adoring man. They consume copious amounts of alcohol.

, Missy, Zoey’s cousin is doing the wedding planning and things aren’t going well. The one bar (it’s a cash bar) has long lines and the food is taking forever to appear. Missy tries to keep everyone calm, but when she asks people to come to the microphone to talk about Zoey, a very drunk Rachel goes on a rant about marriage and weddings that could ruin her reputation.

Of course, the DJ has recorded it all.

Zoey is not the calm, happy bride as things spiral out of control. Missy has seriously underordered food, the two families are totally incompatible and Zoey alternates between giddy happiness and despair at everything going “wrong.”

But López has managed to bring in four love stories: Zoey’s and her new husband Patrick (whom we never see); Sarah and Charlie’s which has gotten off the track; Sammy and his partner; and a budding romance between the DJ and Missy. Each character has a revelatory moment in which they realize what is truly important.

Director Rob Ruggiero has found a wonderful cast for this show. Blair Lewin nails Rachel as the high-powered career woman with a brittle exterior and confidence galore. Her husband, played by Stephen Stocking, has a more low-key and wistful air. Stocking, who was a last-minute replacement due to Covid, does wonders with this quieter role by letting us see below the calm surface.

Hunter Ryan Herdlicka as Sammy starts as super confident, talking about his conquests while professing that his partner (the play is set in 2008) and he have an “open” relationship. But he, too, shows us Sammy’s uncertainties and fears.

Rachel B. Choice is the happy bride who finally realizes that all the mix-ups and mistakes aren’t that important, but will make a great story for her grandchildren. Hallie Eliza Friedman is the sweet but naïve cousin and Estaban Carmona makes the DJ more than just that.

Ruggiero keeps the play moving and builds slowly to those moments near the end when each of the characters discovers what is truly important.

The set, by Brian Sidney Bembridge is the typical bland hotel ballroom that is perfect for the comedy. He also does the lighting. Harry Nadal provided the costume designs.

Zoey’s PERFECT Wedding may remind you of your wedding day or of other weddings you have attended.

As the curtain goes down, you, like Zoey, may realize that it is just one day in the rest of their lives. Each has supported the bride and learned something about themselves and their relationships.