Gerald Barry's The Importance of Being Earnest 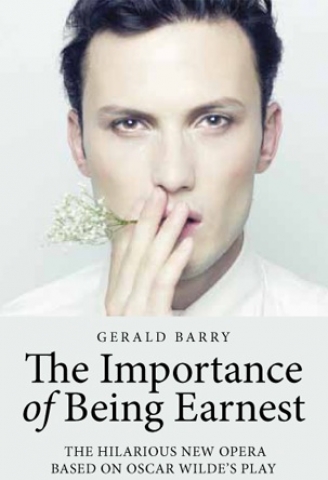 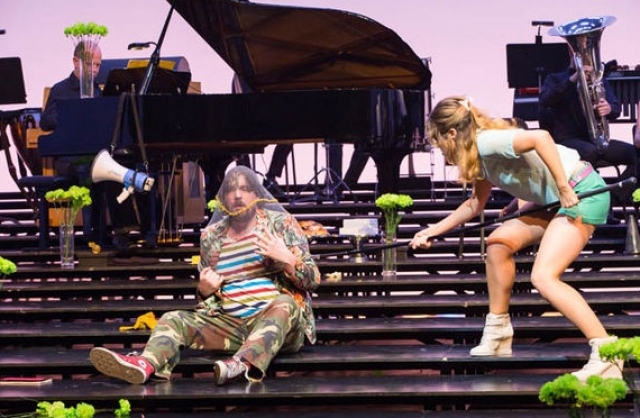 Cecily and Algernon falling in love, sort of. 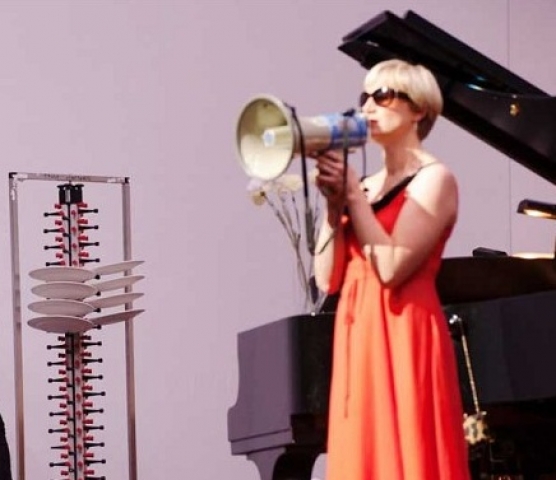 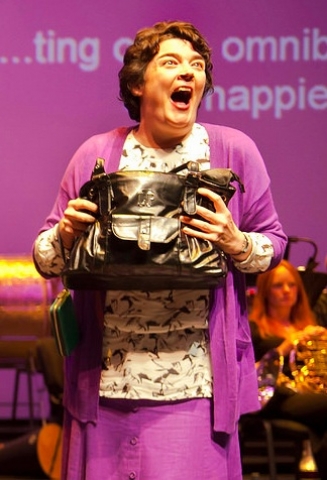 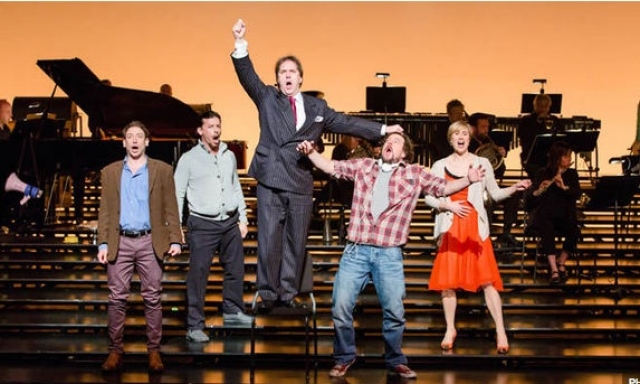 Lady Bracknell, the center of attention.

Gerald Barry’s opera, The Importance of Being Earnest, has engaged audiences in Los Angeles and London. The production  made its New York debut under the auspices of Lincoln Center’s Greater Performers and the NY Phil’s Biennial. An unexpectedly diverting and very funny operatic confection was mounted on bleachers inside a three-sided box at the Rose Theater.

Oscar Wilde’s play, which premiered in 1895, is still widely performed. Only Charley’s Aunt rivals its over hundred-year success.

Artifice for Wilde is more real than reality. Artifice is timeless, which has contributed to the play's continuing pleasures.

Barry captures Wilde’s artificial spirit in the opera. He cut over half the play, and yet its strong arc remains. Witty language, the elevation of the trivial and firmly-etched characters add to the enjoyment of the play-now-opera. Its main theme is also Wilde’s. Bearing the name Ernest is the pinnacle of life’s achievements.

Accidents of birth, novel publication, inheritance and German grammar are all plumbed for meaning. We are not in verismo, in which a young singer confronts the Roman Chief of police, or a Japanese geisha girl commits seppuku when she loses her son. This Barry opera feels like modern Beaumarchais.

Instruments of the orchestra have their own characters and mimic particular tones. Two cacophonous French horns represent the sound of German grammar.

Is this an opera? By conventional standards, yes. It sounds like one and it looks like one. Singers and musicians perform a drama together. Text and musical score are combined. There is a stage of sorts, a box housing broad beams of bleachers with shiny black steps.  The score is through composed.

Recitative abounds and there are curious, abbreviated, but lovely arias, particularly around the emotion of love. Benedict Nelson as Algernon sings tenderly to Cecily. Hilary Summers, in a purple outfit with clumsy sneakers and surrounded by the purple light of passion, lofts sweet notes as Miss Prism bemoans the loss of her charge. When Jack sings of his love for Gwendolen he has a lovely little melodic line.

Superb acting by a superb singing cast is sometimes disguised by the composer's demands.  Claudia Boyle is pressed in her top to deliver shrill screeches.

Barry is inspired to carry Wilde’s wacky, witty message to a new form. He can depend on Wilde’s craft, which frees him to interrupt sentences. Miss Prism divides 'un-settling', 'unex-pectedly' between phrases.

The craziness of the world is reflected in the music. Barry uses past traditions, often turning them on their heads. Beethoven’s Ode to Joy from the 9th Symphony is sung by two characters in rapid fire, divergent versions. Auld Lang Sine starts the opera and crops up here and there throughout.

Brian Bedford as Lady Bracknell was the first man to play a woman on Broadway. Barry casts brilliant bass Alan Ewing in the role of Lady Bracknell. He is not in drag, but rather a tailored, pin-striped suit. What a perfect, deadpan performance. Mock seriousness drives the story and ends up delightful chaos.

A memorable cat fight scene begins with Gwendolen and Cecily speaking to each other through megaphones.  As the conversation turns sour, Gwendolen’s harsh remarks are accompanied by 40 dinner plates being demolished on off-beats.

Ilan Volkoc conducting members of the New York Philharmonic was a highlight of the evening. Unwieldy music was delivered masterfully. The sheer energy of the score carried us along on a whirligig. At one moment the musicians speak in unison, a rare robotic moment in the score.

At the end we do not have a sextet as three happy couples are united. Yet plates are broken like glass at the conclusion of a Jewish wedding, in which two souls are reunited and the memory of their past separation comes crashing down.  All to say, it is important to be earnest about opera. It's also great fun.