One Acts Present Dilemmas in Series B 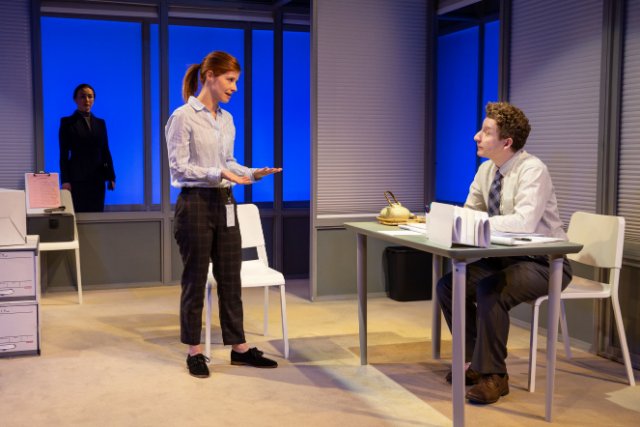 Michelle Liu Coughlin, Mandy Siegfried and Jonathan Randell Silver, a wonderful trio in The Guard Will Escort You to Ruff Ruff by Carole Real

Dilemmas in all their perplexity, humanity or otherwise, and bewilderment are presented in all five one act plays in Series B of the Ensemble Studio Theatre’s annual marathon.

Susan Kim has written subtle questioning in  Privilege. Two couples have had different experiences of life, based on either luck or hard work. The question is: how hard is it to come up with $500?  For one couple, not a problem.  For the other, only pressing a magic button, which will kill someone they do not know, is the answer.  Jose Zayas directs this quartet.

Amanda Quaid’s The Exhibitionist portrays a strong woman (Sharina Martin) struggling to decide whether or not to bring a child into a world where he/she will immediately drown with the polar bears as a result of global warming. Ironically, nature makes her decision.  Studies show, in any case, that the planet would be in better condition without humans.

In Cayenne Douglass’ Oh My, Goodness, a poet is driving herself to death. A little like Sylvia Plath, she becomes the prospective suicide.  She is saved by an accidental encounter with a man at the other end of a mis-dialed phone call to a Suicide Hotline.

The two strongest one acts were Tempo and The Guard Will Escort You to Ruff Ruff.  Wesley T. Jones as Dominic in Tempo sits on a settee wishing that a relationship he once enjoyed had not disappeared.  He conjures it up in a new app, Tempo.  The app is frustratingly intrusive as it beeps every few seconds telling Dominic that he might get more satisfaction if he upgraded to Platinum.  Lights blink blue and orange in the background as the mood and level of reality change.  It is a curiously touching piece, driven by Dominic’s longing and tenderness.  Jones, as directed by Colette Robert, has a perfect rhythm, sometimes unexpected but always just right.  Cecil Butcher is his absent love, now live in app. He is both present and absent as delivered in ether.  The app turns off.  This dark and funny play ends with a real ring on Dominic’s phone.

Carole Real's The Guard Will Escort You to Ruff Ruff features a Temp (the glorious Mandy Siegfried) tasked with catching up on four huge boxes of complaints from the factories around the globe where one of her favorite images, Kitty Kat, is produced.  Tending to the violations and saving lives whets the Temp’s appetite for a big social contribution. She is the only rounded character, but her comments as she digs into the correspondence are curiously yet effectively flat, dictated by disbelief. Both her boss (Jonathan Randell Silver) and a symbol of the oppressed factory workers (Michelle Liu Coughlin) are appropriately two dimensional. The final realization that nothing is going to be done about horrendous factory situations is rather like the risk officer at a bank going to his superior and warning about the false values placed on bundled mortgages. These officers were told that they could either buy the bonds, or pack up and leave the bank forever.  Echoes of the 2012 factory fire that killed 300 workers in Pakistan comes to mind.

The set by Frank J. Olivas transformed play to play. It is a miracle of suggestiveness and efficiency.  The plays offer a lively evening of theater provided by tremendous talent across the board.