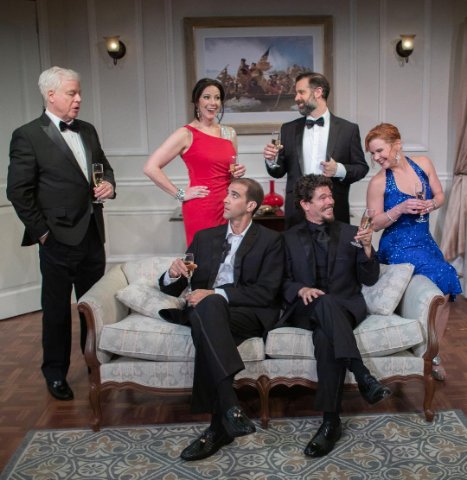 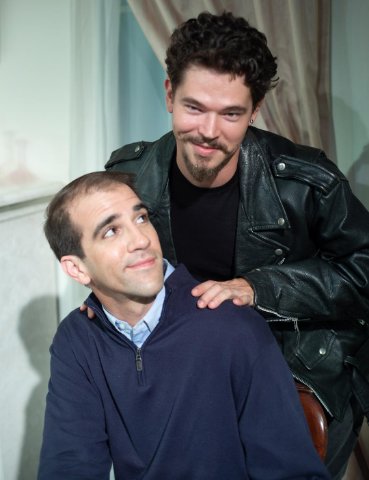 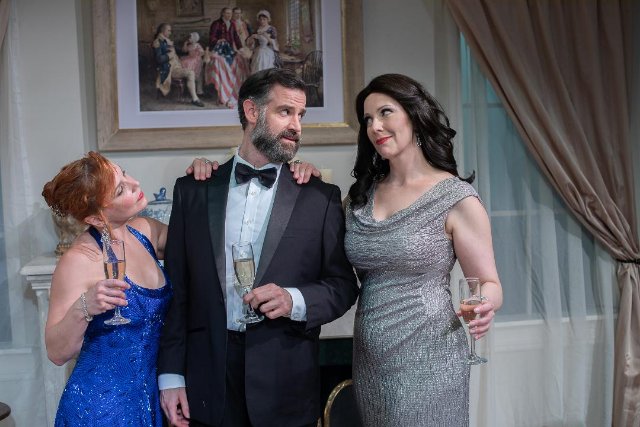 Photo by George Wentzler Philip Wilder (Ben Sandomir) is flanked by the women in his life. To our left, looking at the screen, is stage director Christina Groom (Mallory Dascomb) and Veronica Fairchild (Laura Hodos) 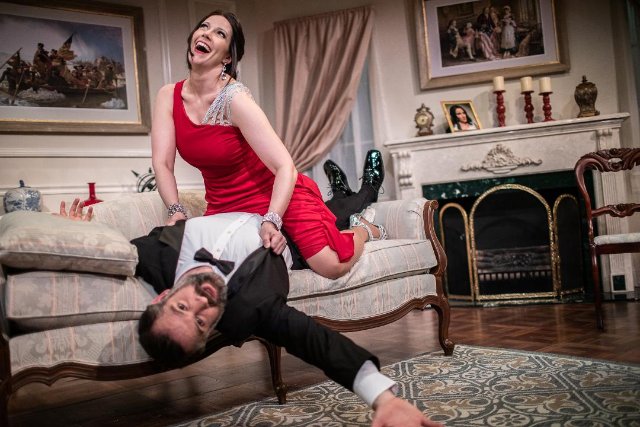 The senator proclaims his vision for America in a sunny, hopeful voice.

However, the audience’s reaction is shades darker. In fact, the groans sound like die-hard fans of a beloved home team reacting with pavlovian jeers as soon as they see the arch-nemesis’ uniforms.

Of course, the senator in this case is presumably wearing his and  our colors. Those would be the red, white and blue of our beloved American flag. Moreover, one would think his words would win us over. But when the tail end of the 1980s bears an eerie resemblance to the latter part of this decade, you can forgive the audience’s reaction.

In particular, this audience was watching Island City Stage’s impressive production of Rich Orloff’s stinging, satiric, unpredictable comedy, Veronica’s Position. Its writer has set it in a stately hotel suite in 1989-90 Washington, D.C.

And the senator speaking was the fictional Harvey Johnson. While he might not be a real person, his self-assured, arrogant manner might call to mind someone currently sitting in the Oval Office.

“I think this country can be great again,” he proclaims at one point in a sunny, optimistic manner.

But instead of applauding his words, some of us might squirm. And while we’re doing so, we might find ourselves wishing that this right-wing Republican senator had no power like another  fictional Harvey Johnson. You know, the nerdy, easy-to-dismiss teenager in the 1960 all-American Broadway Musical, Bye Bye  Birdie.

In Orloff’s play, which deals with issues related to art, politics, romance and allegiance, the senator has introduced a bill. Specifically, it makes it a criminal offense to “use federal funds to create or disseminate works of art that are obscene, immoral, or show contempt for American values.”

But what exactly are “American values?” And for that matter, how do you determine what is “art,” what is an artist’s purpose and how does one define “obscenity?” Further, where do you draw the line between clear government censorship and its officials deciding on who and what gets federal funding?  Should government officials even fund the arts?

These are some of the questions Orloff poses in his sharp, eloquent, smartly-written, rich and complex  play. This high comedy calls to mind the works of playwrights such as Noel Coward and Oscar Wilde. In addition, Veronica’s Position might remind some of Kiss Me, Kate, with Veronica’s on-stage, off-stage conflict between former lovers Veronica Fairchild (a superb Laura Hodos) and Philip Wilder (a versatile Ben Sandomir).

Speaking of the former, she is a middle-aged former screen star/diva who has agreed to reunite with her favorite Ex, Wilder, to stage a revival of Henrik Ibsen’s classic, Hedda Gabler.

Fittingly, Fairchild’s personal secretary, Alan Croft (a flamboyant Stephen Kaiser) warns the weight-conscious Fairchild about the caloric content of just about anything she considers eating. Among the several foods mentioned in Veronica’s Position, one is a danish.

And Orloff’s play is a rich piece. Still, this play hardly contains empty calories, like the aforementioned pastry.

Instead, for a comedy, Veronica’s Position is a complex, meaty and nutritious piece, especially for the brain. Indeed, it will no doubt stick to that organ. The play offers plenty of, well, food for thought. This is the case, even as the play delights with sarcastic humor and talk about theater as an art form. The material about live theater should leave aficionados nodding with familiarity.

This play grabs and keeps our attention not only because of the outsized, colorful characters, relevant issues and snappy dialogue, but the inner conflicts. The title character wrestles with them.

That is because those Fairchild loves and those to whom she is loyal harbor competing agendas. For instance, how does she weigh supporting the senator’s crusade against Alan’s boyfriend’s controversial photographs against the young man’s artistic endeavors? Surely, such a balancing act is hard for Fairchild. After all, she’s in love with the senator and has befriended Alan’s boyfriend, Ezekiel Barrows North (a laid back, yet passionate Jordon Armstrong).

The main relationship in the play centers on Fairchild and Wilder. Meanwhile, a secondary relationship pairs gay couple North and Croft.

Obviously, such couples were not nearly as open during the late 80’s as they are today. Further, during the play’s time period, the AIDS crisis was ravishing the gay community. In fact, real-life controversial photographer Robert Mapplethorpe died of an AIDS-related illness in 1989. Perhaps Orloff modeled North on Mapplethorpe.

Credit the playwright with including a heartfelt scene between North and Croft, during which they bring up HIV testing. The actors deftly convey vulnerability and tenderness during the exchange.

Now, some may dismiss Veronica’s Position as dated. After all, advances in HIV and AIDS research are enabling patients to live much longer. But the current divisive political climate, and the one in society in general, tinged with frightening hate, might rightfully make some afraid. An existing backlash against minorities will only strengthen, some folks might reason.

Certainly, we don’t all agree on what it means to “Make America Great Again.” As a matter of fact, to some, the slogan’s implications might be frightening.

To be sure, in many ways, Johnson is despicable. And in the role, Steve Carroll drips smugness and arrogance, coming across as clear bigot. At one point, he viciously and physically attacks North, shouting in a thunderous, equilibrium-disturbing harsh voice.

Yet, Carroll finds the softer side to this man, imbuing him with sincere tenderness during his scenes with Fairchild.  Meanwhile, through one of Johnson’s monologues, the playwright forces us to consider whether this politician might actually like art — and care about the average American.

Certainly, one could view this senator as a one-dimensional, arrogant bigot. However, Carroll injects just enough humanity into his character to get us thinking.

People may appear one-sided, but they are, well, works of art.

This is certainly true for the title character, whom Hodos portrays commandingly, fearlessly and with endless charisma, seduction and elegance. But Hodos also conveys tension and some heat during scenes between Fairchild and Wilder, who share a love-hate relationship.

Hodos, a multi-award-winning actor, disappears into her character in a performance blessed with spontaneity. Everything about her portrayal, from her wide, piercing brown eyes to her sharp voice, suggests she’s in charge and everybody better know it.  When this woman’s on a mission, watch out.

Meanwhile, as Wilder, Sandomir segues seamlessly between understated sarcasm and unbridled emotion. His strongest moment comes toward the end. To be specific, in one scene, the performer strongly convinces us he is so drunk and unsteady, it’s as though his every move is at the mercy of severe winds.

Speaking of force, Christina Groom storms in and out of the hotel suite with urgency as stage director Mallory Dascomb. Her character, charged with directing Fairchild and Wilder in Hedda Gabler, is supposedly a highly-accomplished theater artist. If we are to believe her, she arrives armed with an abundance of knowledge, particularly about playwright Henrik Ibsen, often called “the father of realism” in theater.

Groom plays Dascomb with palpable determination and purpose. The performer, who literally shakes with conviction at one point, leans forward in her chair and speaks quickly, reinforcing these traits. She, like Fairchild, harbors a no-nonsense demeanor. And so, when these similar personalities clash, we feel the tension.

On the other hand, Kaiser’s Croft and Armstrong’s North are like an odd couple.

Kaiser brings flamboyance to his role — perhaps a tad too much, veering somewhat into stereotype. But Kaiser also displays deft comedic skills. In particular, he delivers the playwright’s sarcastic lines with just the right understated manner, making them sting that much more. Additionally, Kaiser finds the vulnerability within his character, which makes us care about him.

In contrast to Kaiser’s flamboyant Croft, Armstrong gives us a laid-back North. That is, except for when the senator is picking on him. Then, his sharp eyes stare at Johnson with clear disgust and hatred. Also, his temper reaches a boiling point, and he loses it – as does the politician. Heat and ice combine during such moments between these enemies.

Surprisingly, lighting designer Ardean Landhuis’ color palatte does not include intense red. That shade would accentuate such emotions. Also, one might question why the actors need to wear microphones in Island City Stage's intimate playing space.

On the plus side, Landhuis colors, including pink and bluish-purple, bathe scenic designer Natalie Taveras’ luxurious, detailed, realistic set with an aura of elegance and romance. And W. Emil White’s costumes deftly define character.

Director Michael Leeds’ varied pacing and tones, as well as his striking stage pictures, keep our interest in a play that features more than one genre and has a lot to say.

While the versatile Orloff exercises our minds in Veronica’s Position, he also thoroughly entertains us.

If the playwright maintains that formula, he won’t be “one of the most popular unknown playwrights" for long.

Island City Stage continues its production of Veronica’s Position through June 30. Tickets are available online at www.islandcitystage.org, or by calling (954) 519-2533. Group and non-profit rates are available. The theater is located on the Wilton Theater Factory’s mainstsage, 2304 N. Dixie Highway in Wilton Manors.