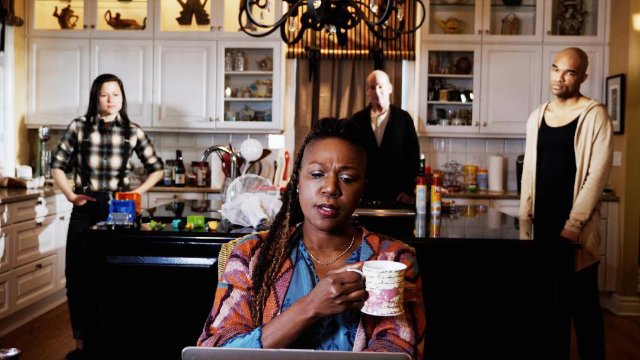 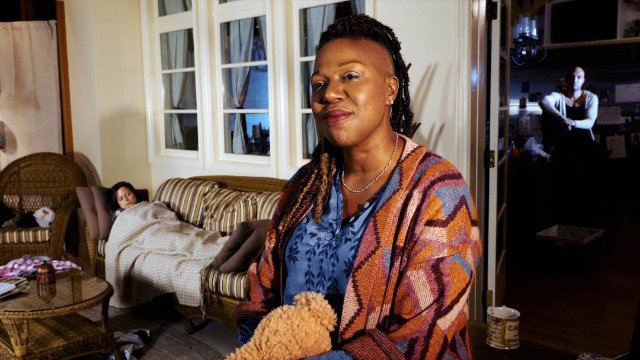 As far as the use of expletives? Yes! You heard it right. Sugar’s heart-felt advice-giving answers, many based on her own confessional-sounding experiences, ain’t those of Dear Abby. Nor are they those of her sister Ann Landers. These syndicated columnists, a staple in American households for decades, and read by millions during the 50s and 60s, would rather drown in their martini than use a single cuss word.  Not the modern-day street-wise Sugar who has been around the block several times. Without hesitation, she nonchalantly peppers her heart-felt advice with a deluge of well-placed cuss words.

Tiny Beautiful Things, conceived by Marshall Heyman, Thomas Kail, and Nina Vardalos, and adapted to the stage by Vardalos, best known as the writer and star of the 2002 hit movie My Big Fat Greek Wedding, first showed its face at New York City’s Public theater December 2016. Doing double duty, as both the play’s adapter, and Cheryl Strayed’s doppelganger, Vardalos, an alumna of Chicago’s Second City, played the title role of Sugar. She reprised her role as Sugar, in sold out runs, at the Public Theater in 2017, and at the Pasadena Playhouse in California in 2019.

Highlighting author Strayed’s equally impressive resume, which no doubt will have many a writer turning green with envy, the same year that her best-selling book on love and life advice hit the stands, her book, Wild: From Lost to Found on the Pacific Crest Trail, an Oprah Book Club pick, subsequently turned into the 2014 movie Wild starring Reese Witherspoon, rose to the top of the New York Times’ the best seller list.

George Street Playhouse’s version of Tiny Beautiful Things opens with an obviously overwhelmed Sugar pondering over an email that she just received. It is an offer from an editor, an admirer of Sugar’s writing, asking her if she would like to take over his weekly, non-paying, anonymous advice column at Rumpus, an online literary magazine. Her knee-jerk response, after mentioning that she is married with 2 children, trying to finish a book, and having a mountain of debts, finds her jumping at the chance.

Following our dramatic tone-setting meeting with Sugar, the play’s three ancillary actors, introducing the audience with examples of what’s coming down the pike, begin to bombard Sugar with a flurry of inconsequential advice-seeking letters. Each letter starts with the salutation, Dear Sugar. Essentially serving as teasers, none are answered, and none appear to be all that serious or life-threatening.

One letter writer asks, Dear Sugar, how come when my fiancé thinks I am going to break up with him he suddenly gets nicer?  Others state their latest one sentence problem, I am in the 8th grade at a new school and my science class partner is the kid that picks his nose. I get sea sick and I have a boat trip with my boss coming up. I’m a sixty-four-year-old man, and I am sure my neighbor, a widow, is spying on me. I’m an 18-year-old woman and I need money badly.

Of course, the more serious cases, as I like to call them, bubble up throughout the play. It is here tackling such topics transgender and, gay issues, falling out with a parent, handling abuse, and leaving a marriage, that we get to actually see Sugar’s burgeoning thoughts playing across her face, as she prepares meals in her kitchen, sits in her living room, is out in her garden sipping a glass of wine, or at her computer, all the while with one or more of the actors looking on.

On the way to formulating her answers Sugar talks about her first marriage, her second marriage, her bout with drugs, being sexually abused from ages 3-5 by her grandfather, her abusive relationship with her father, past and present, and the death of her mother, the latter, a two-hanky moment.

One of more painful, and deeply moving stories in the play, is beautifully acted by John Bolger who inhabits Alfredo, a grieving father whose twenty-two-year-old son was killed by a hit and run driver. So destroyed is Alfredo by this tragedy which happened four years ago, and unable to write a cogent Dear Sugar letter, he resorts to sending her twenty gut-wrenching statements detailing the hell he is still going through. “Most days I feel like my grief is going to kill me, or maybe it already has.” Before signing off as a ‘Living Dead Dad’ he asks Sugar, “How do I go on, how do I come become whole again.”

Sugar, like her answers to all of her readers, counteracting each of Alfredo’s somber statements with twenty positive supporting statements of her own, plus two more for good measure, attempts to turn Alfredo’s pain into gain. Her mantra-like solution to most problems, being Love, Acceptance, Forgiving, Reaching Out, and above all, Getting On With Your Life.

Adapted to stage by: Nina Vardalos

Currently streaming as is It’s Only a Play by Terrence McNally Directed by Kevin Cahoon June 8-27, 2021 This production can be purchased for $33 at georgestreetplayhouse.org.