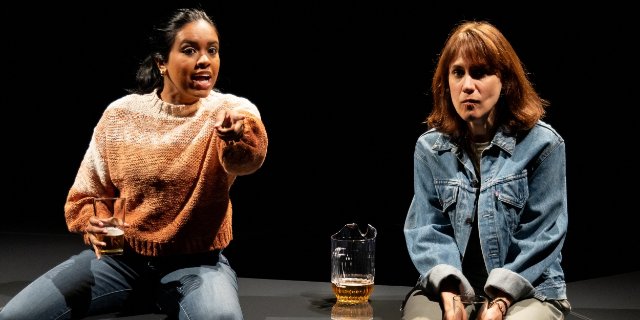 Academic ethics, ecology and relationships play major roles in Queen now at Long Wharf Theatre through Sunday, June 5. Mixed in is the clash between multiple cultures: the academic/scientific one, the Indian cultural one and that of the passionate advocate.

I wasn’t sure what to expect from this work by Madhuri Shekar and produced in partnership with the National Asian American Theater Company’s project.

But I found it an engrossing, if not always totally motivated work.

The play centers around two advanced graduate students: Ariel (a single mom) and Sanam are close to completing a six-plus-year research project on the relationship between the death of honey bees and a chemical manufactured by Monsanto. The work under the guidance of their professor, Dr. Philip Hayes has been accepted by Nature magazine.

But Sanam – who is a mathematician/statistician that developed the formulas for the project – notices that the last data entered causes the results to become no longer significant. This puts the entire project in jeopardy. Each of the three has their futures tied to the success of this work. For Dr. Hayes, it would mean more funding sources and prestige (UC Santa Cruz isn’t a top-ranked research university); for Ariel, it would open the door to prestigious post-docs and job offers, and the same for Sanam.

What to do? Sanam reviews and reviews the formulas and the statistical operations that might have caused the results but cannot find a flaw. For her, it seems simple: more data – at least three years’ worth — is needed. But for the others that is impossible. Someone from a more elite institution will publish before them; Ariel can’t wait for her future. She has sacrificed a great deal – including a relationship for this project. Plus, the bee colonies don’t have three more years.

Both Ariel and Dr. Hayes initially want Sanam to “fix” the problem – the discussion here about how that could be done requires you to be very knowledgeable about statistical practices; I could only guess at what they are asking her to do.  That violates her ethics as a mathematician.

Underneath it all are two subplots: Sanam has a date with Arvind which has been set up because their grandfathers played golf together. It is time for her to marry and her Indian family keeps finding possible matches. Will this be a romance or another dud?

The other revolves around Ariel who has a more than strictly scientific interest in the destruction of honeybees. She comes from the central valley of California and her family’s work was as beekeepers who supplied hives to the farmers there. She has seen the hives die from no known cause.

I won’t reveal what happens to any of these storylines except to say that some of the changes of opinions don’t seem always to be clearly motivated.  As often occurs when people are stressed and upset, things are said and threats are made that cause upheaval among the three.

The four-person cast has been well directed by Aneesha Kudtarkar. Queen is staged in the round. Long Wharf has added some seating on what is often part of the stage. In front is a six-sided table which is separated and united at various times during the show which runs about 100 minutes. I’ve always found this type of in-the-round seating distracting in a smaller theater such as Long Wharf – your eye can move to the facial expressions of the audience members facing you.

The four-member cast is excellent. Avanthika Sirinivasan manages to integrate Sanam’s disparate elements into a coherent character. I might not always totally understand her choices, but Sirinvasan imbues them with a sense of reality.  Keshave Moodiar does well with Arvind; he captures the various aspects of Arvind, but those elements of the character seem more like plot devices than a person. Ben Livingston has the most underwritten role – that of the professor, Dr. Philip Hayes. He is also on stage the least amount of time.

Livingston and Stephanie Janssen as Ariel do give a hint of more than just a student-mentor relationship. Not a romance, though that did cross my mind, but more likely a friendship born of hours working on this project over the years.  As Ariel, Janssen shows us her passion for ecology and her fascination with the honey bee, particularly the queen bee.

Shekar’s play combines thought-provoking topics with engaging personal stories. You are rooting from both Sanam and Ariel to succeed.