A Take Off from Beethoven's Fidelio 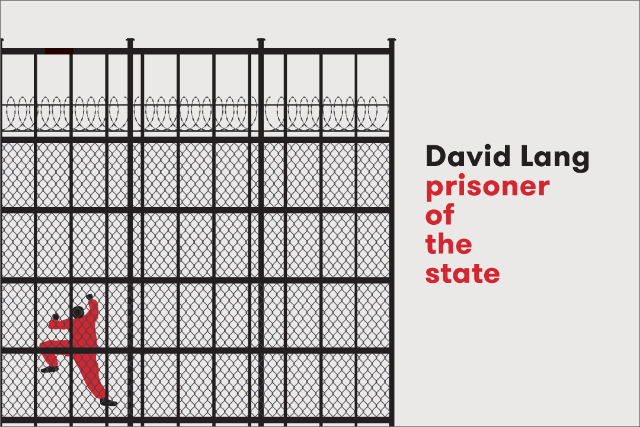 The world premiere of David Lang's prisoner of the state takes place in David Geffen Hall, home of the New York Philharmonic. The 106 member orchestra will perform, but this can hardly be called a concert production.  Instead the Hall has been transformed into a prison. Even the instrumentalists on stage are in prison. Costumes, chains and handcuffs were ordered from Bob Barker, the country's leading detention supplier.

Conductor Jaap van Zweden, as he prepared to move from Dallas to New York, suggested to Deborah Borda, the newly appointed President and Chief Executive Officer of the New York Philharmonic, that Lang was writing an opera and they should commission it. Borda is clearly a woman of action, and she did. Lang composed prisoner of state. When Lang was asked who he imagined singing the roles he created, he gave the NY Phil a list of performers. The next day, he got a call: We have hired them all.

The prospect of getting inside David Lang's mind and heart and following them out as his pen writes the notes and the words tantalizes. Lang is very much his own composer.  Even as he references Fidelio, he is not going to quote it. We will hear none of Ludwig von Beethoven's notes, Lang reports.

Instead Lang has responded to the ideas of Beethoven and his unrealized thoughts.  Beethoven was political. He dedicated Eroica to Napoleon but backed off when he realized what manner of man Napoleon was as he crowned himself Emperor in 1804.

Lang has been obsessed with Beethoven's sole opera for forty years. He once proposed composing an update to John Crosby of Santa Fe Opera.  Crosby replied, "We have our Fidelio." One reason Lang prefers the concert hall for this opera, is the fear that in an opera house, the work would be compared to the original. It is Beethoven's ideas that impel prisoner. There are no references to Beethoven's music.

The discussion of the new opera between Borda and Lang at the David Rubenstein Atrium opened with the aria "Gold," sung by a menacing Eric Owens as the prison guard.  We are convinced that he will do anything for gold.  (He has, after all, sung Alberich in the 2012 production of The Ring. He stole the Rhine gold!)

The discussion concluded with a gorgeous aria sung by Lang favorite Alan Oke. It is set to the words of Machiavelli's The Prince. Lang, never forget, is a polymath, and his best work is set to his own libretti.  prisoner of the state is.  The theme here is that engendering fear is more important than engendering love. Lang is obsessed with politics, among his other fruitful obsessions.

In many ways, Lang's work looks at the ordinary man, if there is such a thing.  the loser tells the story of three pianists who studied together one summer in Salzburg.  At the end of the summer, the two ordinary pianists wanted to kill themselves. The third pianist was Glenn Gould.  In Lang's prisoner we will trace the journey of a woman seeking to free her husband who may be locked up. Beethoven stops there, creating an opera about conjugal love. The question that ends the prisoner is the prisoners: What will become of us?

Lang's work arouses passion, religious fervor and a wish to be better than we were before we listened to it.  It should be a thrilling theatrical and musical experience in David Geffen Hall, June 6-8.