At Old Globe in San Diego 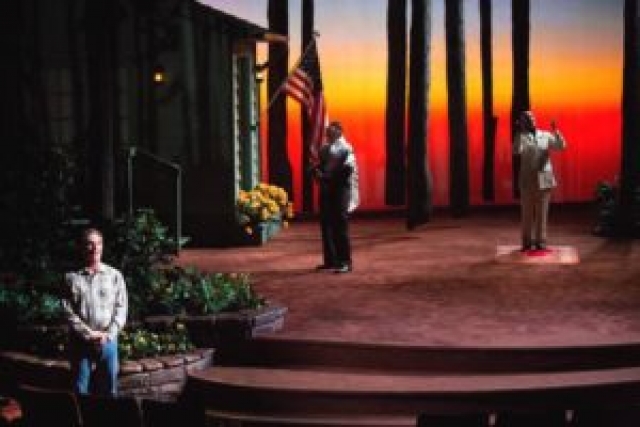 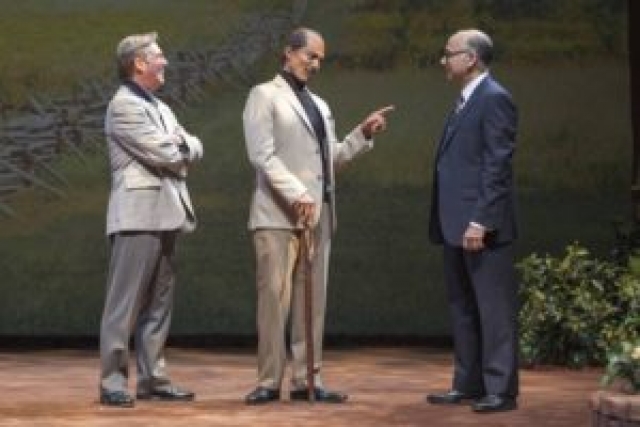 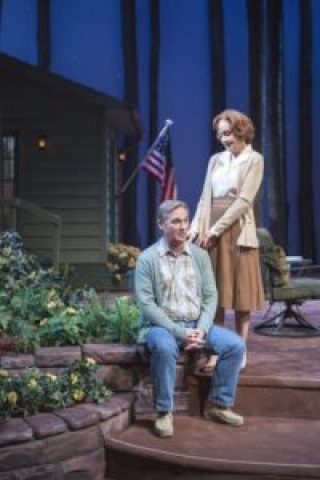 Contrary to what our current Congress seems incapable of doing what it should be doing when it comes to compromise, or to put it in Washington, DC, vernacular to practice ‘the art of the deal’ so loved by our politicians and others who seek public office these days.

Bringing disparate parties and points of view to a resolution in any situation is not an easy task. In international diplomacy it’s especially difficult and frustrating when it appears that the stars are beginning to align with an agreement in sight, only to have the negotiations breakdown once again by entrenched positions where nobody wants to appear as having ‘given in’.

Back in 1978 then U.S. President Jimmy Carter took on the role of being a peace-maker and broker, bringing

Israeli Prime Minister Menachem Begin and Egyptian President Anwar Sadat together at Camp David in Maryland, for discussions on how to craft a peace accord between the two sworn enemies that fought four wars over their differences. It was an ambitious and daunting undertaking.

In Wright’s stage play we are like flies on the wall who pierce the veil of high level international diplomatic chess-like verbal games played by two world leaders who are reluctant to give an inch when the discussions begin. Wright’s premise of what takes place over 13 days allows the audience to view the human side of each player, the same way the characters learn to interact with each other. Each day the characters of Begin and Sadat slowly change their rigid and frozen ideologically-held positions as they get to “know each other”.

Conflict in all its forms is the stuff of great drama. When the outcome is known, as in this production, it falls to the actors to perform the heavy lifting of sweeping the audience along with Wright’s brilliant narrative. Great writing makes the work of actors a pleasure. It presents each actor the luxury of being able to create a fully developed, interesting character.

Richard Thomas’ winning performance as President Carter, shows the former, self-effacing President to possess more skills and qualities than just being a peanut farmer from Georgia. Thomas’ performance allows the audience to peek into the private and pressure-driven life of a spiritual American President who has his doubts about the success of the audacious project he has undertaken. Hallie Foote as Rosalyn Carter delivers not only charm, support, and respect for her husband as the leader of the free world, she is an important partner-player in the negotiations taking place at Camp David.   Both are finely crafted performances.

The portrayal of Eisenberg’s Begin, who once was listed as a terrorist, renders the Israeli Prime Minister as not only a strong leader, but also as a man who can be warm and one with a sense of humor who understands what’s a stake in any peace accord with the Egyptians. The Arab Middle East for years has vowed to drive the Jewish people into the sea, along with their ancient homeland Israel. Eisenberg’s Begin is a highly nuanced and compelling performance.

Nabawy’s characterization of Anwar Sadat presents a man who realizes that any decision made at Camp David will affect millions of people, and in the process, will label him as being a traitor to the Arab cause (Sadat was assassinated three years later by fundamentalist army officers for his part in the 1978 Peace Accord). It should be noted that the Carter-brokered Peace Accord between Israel and Egypt has been in place for almost forty years with no wars. However, the Middle East of today remains in chaos. Diplomacy should always trump (no pun intended) war in most cases.

“Camp David” is a stellar ensemble effort on the part of the company. It is also a credit to the skill and vision of director Smith who previously staged the play at the Arena Stage in Washington, DC in 2014, and as the director, continues to find fresh nuances in the material and the ensemble performances.

The Old Globe has few equals when it comes to the technical elements, and this production is no exception. Director Smith heads a richly inventive creative team led by Scenic Designer Walt Spangler who recreates the woodsy setting of Maryland’s Camp David presidential retreat. Lighting by Designer Pat Collins serves up many mood-inducing moments and allows the audience to see the costumes of Designer Paul Tazewell. The projection designs of Jeff Sugg, and the sound design and original music by David Van Tieghem further compliment this splendid overall production.