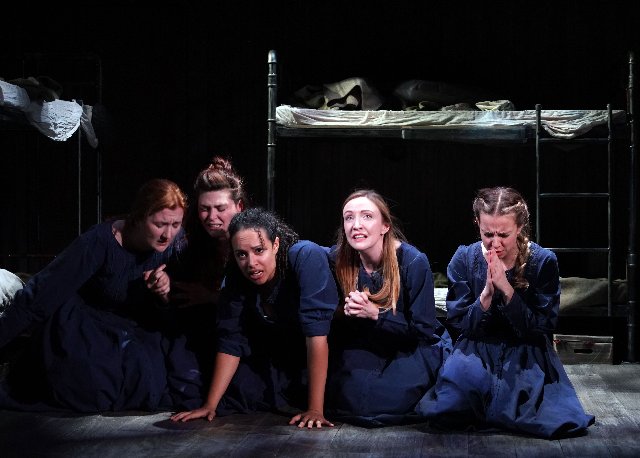 Between the years 1848 and 1851 over four thousand Irish females took passage on ships from Ireland to Australia under the Orphan Emigration Scheme, established by Earl Grey. This action had the effect of relieving many of the workhouses and poorhouses of Ireland (already full to the brim with people seeking respite from the ravages of the ‘Great Famine’), and of providing ‘new blood’ for the Colonies – wives, servants, farm-workers. The women who left were more generally known as ‘orphan girls’, though many were neither orphans or, strictly speaking, girls. The most notorious and riotous amongst these – both in transit and on arrival in Australia – were known as the Belfast girls.

I am always amazed by the work coming out of the Irish Repertory Theater. From the acting, directing, the plays that they chose to mount, and the ultra-savvy utilization of their two stages, be it with a cast of one or two, or an ensemble of twenty.

The Drama Desk, for NYC’s 2012-2022 theater season, recently nominated the Irish Rep for their Best Sound award (Hidenori Nakajo & Ryan Rumery) for Ken Barry’s Autumn Royal, which opened on October 8, 2021 and closed on November 21st. Winners will be announced on June 14th at Sardi’s.

Critics agreed that Barry’s “tense,” “funny,” and “mysterious” play was a perfect choice for the Rep’s return to live theater since all theaters, thanks to a Covid invasion, went dark for some twenty months on March 13, 2020. Not one to go silent, the pluck of the Irish kicked in, and a goodly number of wonderful plays were made available by the theater for streaming.

Belfast Girls, the Irish Rep’s current play by Jaki McCarrick-  it runs through Sunday, June 26 on their mainstage - is another sure-fire winner. Though all of the play’s action takes place on the transport ship Inchinnan in 1848 bound for Australia, the majority of the two act, 12-scene play with one intermission, takes place in a small, cramped, and windowless 5-bunk bed cabin in the ship’s steerage, and to a lesser degree on the ship’s deck where the girls can be seen contemplating their future.

As the play unfolds, we are slowly introduced, one and two at a time, to the five young Irish women. Each one is seen carrying a small suitcase which holds their meager belongings. Most, except for Molly the last to arrive to the cabin, seemed to know all about the sordid life that each other led in Belfast, which occasionally included prostitution to make ends meet.

There’s Judith (Caroline Strange), the daughter of a Jamaican woman and an Irish Man. Somewhere in her twenties she is the Alpha of the group. It is she, when the girls are full of doubt about leaving their homeland, reminds them that there is nothing for them in Ireland. As her mantra goes, from now on they are now to be “mistresses of their own destiny.” All will be better for them when they get to Australia, she tells them.

There is fat Hannah (Mary Mallen), as the other girls call her. Something of a singer, to calm her anxiety and lessen the interminable boredom for everybody, she frequently breaks into song. There is tough Ellen Clark (Labhaoise Magee), nicknamed stupid, and Sarah Jane White (Sarah Street), who has a brother waiting for her in Sydney, and the youngest of the lot, 17-year-old Molly Duncan (Aida Leventaki). Bookish to the nth degree, and an evangelist at heart, Molly is given to quoting Marx and Engels, and reading the poetry of Shelly out loud.

By the end of the first act, bombarded with character revealing details; a couple of threatening knife fights, fast changing alliances, a hurricane which turned stomachs, and tossed the girls in the air like ragdolls, and the appearance of a large rat, the latter two forcing them to climb into each other’s beds for comfort, we feel that know these girls like the back of our hand.

Act two, with more twists than a pretzel, several fights erupt, changes of alliances are made, a shipboard love affair blossoms, deeply hidden secrets and lies are revealed, and a near-lynching of one of the girls from the ship’s masthead, we are shockingly proved wrong.

Brilliantly supporting a cornucopia of such sudden and unexpected happenings is the sure hand of director Nicola Murphy. Adding much authenticity to this story-telling journey, which served to turn us audience into passengers, is Chika Shimizu’s set, China Lee’s just so lighting, and Caroline Eng’s remarkably true to life sound design, which features the plaintive cry of seagulls, lapping water, crashing waves, and the sound of a wild party going on in adjacent quarters. As I left the theatre, thoughts of this play being made into a movie crossed my mind.

Note:  Masks required in building and theatre, along with proof of a vaccination, and a valid government issued photo ID.

Belfast Girls written by Jaki McCarrick, and directed by Nicola Murphy opened on Thursday, May 19, 2022 on the Francis J. Greenburger Mainstage at the Irish Repertory Theater at 275 West 22nd Street in Manhattan. The play will be running through Sunday, June 26, 2022.  Running time is 2 hours, 10 minutes with one intermission. For more information, or to buy tickets call 212-727-2737 or go to https://irishrep.org