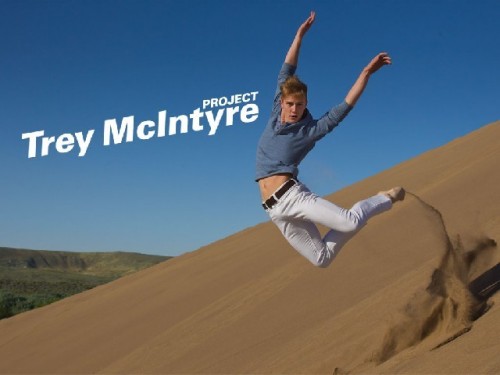 A bold company with a strong Jacob’s Pillow history including five engagements since 2005, Trey McIntyre Project will make its final appearance as a fulltime dance ensemble June 25-29 in the Ted Shawn Theatre. Called “engaging and provocative” by Karen Campbell of The Boston Globe, Trey McIntyre’s dances overflow with fresh intelligence, unabashed physicality, and spirit. TMP’s Festival 2014 program features The Vinegar Works: Four Dances of Moral Instruction, a new work inspired by the surreal art and writings of Edward Gorey, and the East Coast premiere of Mercury Half-Life, set entirely to the music of legendary rock band Queen.

“The Pillow seems the perfect place to close this chapter of Trey McIntyre Project… Audiences connect with Trey’s work – and the exceptional dancers in his company – in a way I have not seen in many years.  We are honored to host the farewell performances of the Trey McIntyre Project.  It will be a very special week and a homecoming of sorts.  Trey is deeply creative in many ways, and I’m sure this new artistic direction will be interesting and prolific.  I look forward to seeing what the future holds for him and his fabulous dancers.”

Inspired by the surreal imagination of writer and illustrator Edward Gorey and his characteristic pen-and-ink drawings, The Vinegar Works is McIntyre’s final work for the fulltime company. Taking place in a dark and decadent world brought to life by Bruce Bui’s costumes with puppets and props designed by Dan Luce and Michael Curry, whose work is featured in The Lion King on Broadway and various Cirque du Soleil productions, this suite of dances acknowledges Gorey’s affection for the ballet and includes recordings of Gorey poems read by acclaimed actor and 1998 Tony Award winner Alan Cumming. The Vinegar Works: Four Dances of Moral Instruction will have live accompaniment by Trio Solaris, a prestigious group comprised of the Music Institute of Chicago’s top Fellow Laureates, performing “Piano Trio No. 2 in E minor” by Dmitri Shostakovich. Trio Solaris features violinist Gallia Kastner, 17, gold medal winner of the 2013 Fischoff National Chamber Music Competition; cellist Nathan Walhout, 16, a 2014 Ars Viva Symphony Concerto Competition winner; and pianist Andrew Guo, 15, a first prize winner of the Society of American Musicians Competition.

In Mercury Half-Life, which premiered in Boise in 2013, the exceptional performers of Trey McIntyre Project dazzle in daredevil partnering through duets and trios, and let loose with infectious, propulsive movement.  Mercury Half-Life’s score, entirely by the band Queen, includes beloved ballads “We Will Rock You,” “Bohemian Rhapsody,” and “We Are the Champions” as well as lesser-known songs such as “Love of My Life,” “Good Old Fashioned Lover Boy,” “Millionaire Waltz,” and a tap number set to “Bring Back That Leroy Brown.” This exuberant crowd-pleaser is a fitting capstone to TMP’s years as an audience favorite at the Pillow.

Trey McIntyre Project first appeared at the Pillow in 2005 as a summer pick-up troupe comprised of top ballet dancers from across the country. The group returned the following year in the Ted Shawn Theatre, and made its debut as a fulltime company in 2008, with subsequent engagements in 2010 and 2012. Of the company’s 2010 appearance, Alastair Macaulay of The New York Times wrote: “The dancers move their whole bodies with a mixture of freedom and precision that’s startling, and they look motivated in every moment. The connection of classical form to personal impulse…is unusual…there’s a fertility of invention and a modernity of spirit here that are all Mr. McIntyre’s own.” In celebration of the company, a panel of friends and fans will show and discuss favorite video clips from McIntyre’s repertory in a free PillowTalk on Saturday, June 28 at 4pm.

Never Stand Still is Ron Honsa’s award-winning documentary about Jacob’s Pillow Dance Festival, featuring interviews with legendary dancemakers and behind-the-scenes footage. This is the only opportunity to see this remarkable film onsite during Festival 2014. Tickets $10, available at jacobspillow.org and via phone 413.243.0745.

The art of the dance movie poster is celebrated in this extraordinary group of vintage posters from throughout the world, selected from the personal collection of one of the genre’s foremost experts, Mike Kaplan, an award winning campaign designer and producer. Among the star dancers featured are Gene Kelly, Rita Hayworth, Cyd Charisse, and Astaire & Rogers, with a special salute to Marge Champion on the occasion of her 95th birthday.

One hundred years ago this summer, the iconic dance soloist Ruth St. Denis married Pillow founder Ted Shawn and formed a company that spawned American modern dance. Their union was celebrated here with a lavish 50th Anniversary celebration in 1964 (despite their formal separation in 1930), and now their partnership is explored through treasures from the Jacob’s Pillow Archives.

This informal library and reading room allows impromptu visitors to view videos, browse through books, access the Pillow's computer catalog, or peruse permanent collections of Pillow programs and photographs. Pillow Interactive, the popular touch-screen kiosk, provides instant access to rare film clips ranging from the present day back to the 1930s. Visitors may also sample videos from other Dance Heritage Coalition archives and companies throughout the country. FREE

The Sayat Nova Dance Company of Boston (SNDC) was formed in 1986 as an independent, non-profit dance ensemble, under the direction of Apo Ashjian. SNDC performs traditional Armenian folk dance, which is recognized as a celebration and reflection of the life and legacy of the Armenian people. Each dance symbolizes livelihood, aspirations, legends, and an appreciation of beauty. FREE

Mike Kaplan, award-winning poster art director (A Clockwork Orange) and producer (The Whales of August) talks about poster design and his monumental collection highlighted in Gotta Dance!, an exclusive Blake’s Barn exhibition at the Pillow this summer. FREE

In this final week of performances by Trey McIntyre Project, a panel of friends and fans pay homage and show clips from some of their favorite McIntyre dances. FREE

Dancers from the Tap Program of The School at Jacob’s Pillow present variations coached by program director Michelle Dorrance. Dorrance is a recipient of the Jacob’s Pillow Dance Award (2013), and her troupe Dorrance Dance performs for two weeks in the Doris Duke Theatre, July 16-27. FREE