Maestro Exits Over the Raindow 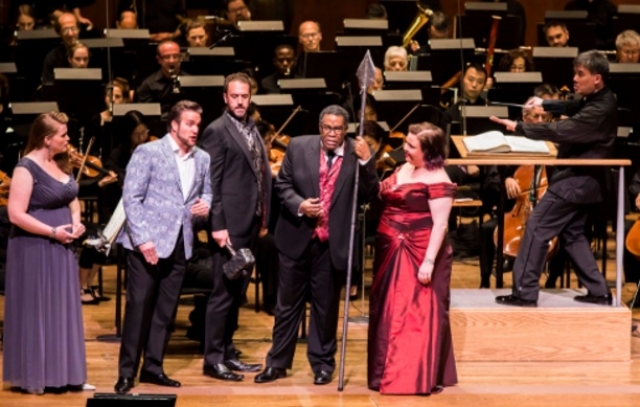 It wasn't even supposed to be Wagner.

A week ago, Michael Cooper of The New York Times wrote a lengthy feature about Alan Gilbert, the conductor who is in the midst of saying goodbye to the New York Philharmonic after eight storm-tossed years at its helm. This year, Mr. Gilbert had planned to present Olivier Messiaen's epic opera Saint-Francois d'Assisse giving New Yorkers a chance to hear this great work with Eric Owens in the title role.

Instead Saturday night found Gilbert conducting the second of three concert performances of Wagner's Das Rheingold, the first installment of the epic Ring cycle. Owens was featured, this time singing his first New York performances as Wotan, the ill-fated king of the gods in this epic drama. He was the central feature of one of the best Wagner casts assembled in New York in some time, surrounded by a mix of European and American singers, all exhibiting a high level of artistry.

The minimal staging added one platform to the lip of the stage of David Geffen Hall. Otherwise singers entered and exited from the big doors on either side of the stage, or used a door on the north side of the house. Props were minimal: a spear for Owens, a hammer for Donner (Christian van Horn) and glitterdust to symbolize the Rheingold  itself and later, the Nibelung hoard.

Singers wore simple costumes: dapper stylized suits for the male Gods, gowns for the women. The Nibelungs (of whom only Alberich and Mime appeared) wore workaday anoraks. The Giants were in big leather trench coats.

Gilbert led a very slow Prelude, bringing the eight horns upward in slow, curving arcs and having them all sound in an elaborate canon. The intervals here are especially important as they serve to birth much of the thematic material of the Ring. The pace quickened a bit as the Rhinemaidens entered but remained stately and generally slow, friendly to the singers and all the better for it. Jennifer Zetlan, Jennifer Johnson Cano and Tamara Mumford were a starry trio of Rhinemaidens, and their games teasing Alberich (Christopher Purves) quickly turned into a recipe for disaster when Alberich stole the gold and renounced love.

Owens, who entered with Barton as Fricka, benefited from Gilbert's measured approach to the score. His bass-baritone has the right heft for the part now, benefiting from dark low-end tonal color that suits this God in his angriest and most fallible moments.

Barton was superb, playing Fricka's wit for laughs to an appreciative house and singing with voluptuous tone. Russell Thomas' sharp tenor isn't always pleasing but he captured Loge's biting wit and fickle nature. The trio of Rachel Willis-Sørensen,  Van Horn and Brian Jagde made the most of their small parts as Freia, Donner and Froh, Wotan's in-laws.

However it was the Giants, Fasolt (Morris Robinson) and Fafner (Stephan Milling) who walked off with the opera, much as these two laborers walk off with the gold. Robinson made a passionate case for Fasolt as the only character with a heart in this very cold opera.

Milling, a Danish singer known from European Wagner DVDs but a rare visitor to these shores, was even better. He sang even deeper and lower as the greedy Fafner, having his triumphant moment when he hit his brother with a deadly hammer punch. Robinson turned and slowly exited, followed by Mr. Milling, who looked unruffled as he moved his hoard of invisible treasure.

Christopher Purves, who worked with  Gilbert on the opera Written on Skin was an effective Alberich, although he suffered an ugly moment in the third scene when his voice suddenly transformed into a toad-like croak. He recovered and finished the night. As Mime, character tenor Peter Bronder had a sharp presence and surprising power. He'd be a better Loge.

However, in the final reckoning, the evening belonged to Gilbert, whose taut command of this orchestra over such a long and contiguous work reminded New Yorkers that his departure at the end of this season will be a terrible loss indeed.

Published by permission of Superconductor