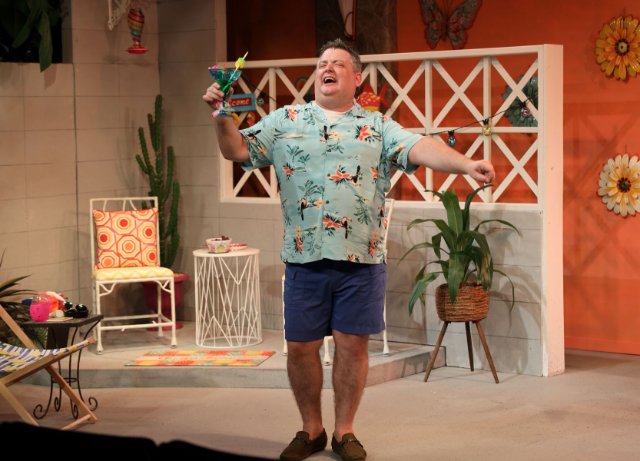 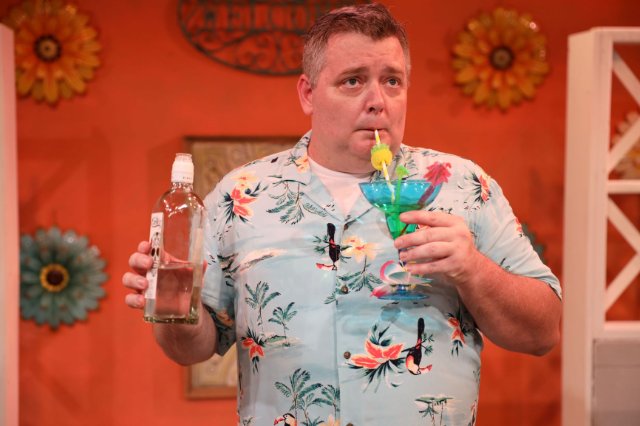 Photo by Matthew Tippins Gerry (Thomas Mark) takes some time to refresh himself. 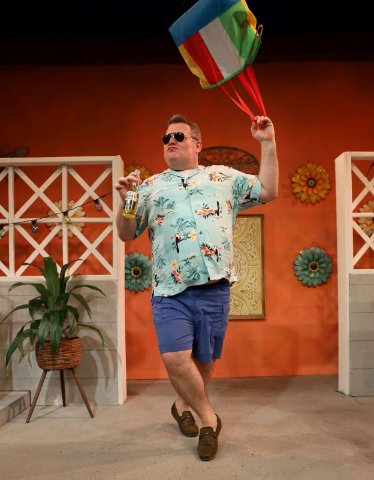 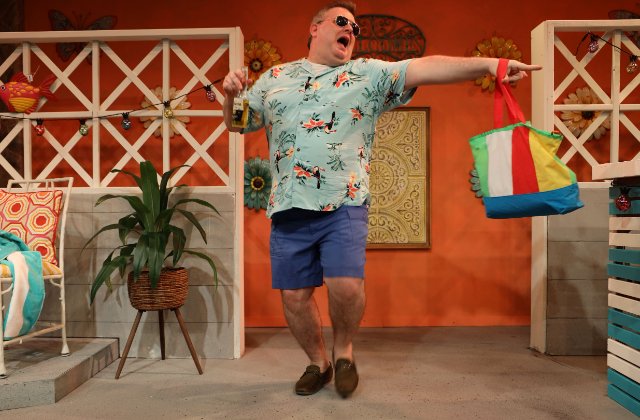 While watching Drew Droege’s delightfully comic, single-character play, Bright Colors and Bold Patterns, one might wonder: Is the horizontally big fellow at the piece’s center always so boisterous? Further, how much are alcohol and drugs responsible for Gerry’s tirade? And when it comes to the dress code at a gay wedding he plans to attend, does the banning of bright colors and bold patterns really irritate him so much? Or is something else bothering him as well?

Certainly, we can say this – Gerry, a gay, single man, is an unpredictable, flamboyant, larger-than-life, fast- and loud-talking individual (think Nathan Lane) with an encycolpedic knowledge of popular culture. As a result, it’s hard for him not to rivet you. However, one hopes he calms down just a bit for the wedding.

But, Bright Colors and Bold Patterns, playing at the nonprofit, professional Island City Stage near Ft. Lauderdale through June 29 in a riveting, hilarious production, does not include scenes from the wedding. Rather, Droege sets his play on a pool deck the night before Josh and Brennan are to tie the knot during a ceremony in present-day Palm Springs, Calif. Gerry is the only character physically present in the play. It is essentially a roughly 1 hour and 45-minute monologue. Still, Gerry talks to others as though they were present. Pauses in the play are stand ins for the other characters’ spoken words. Instead of having Gerry face one way while speaking as himself, and then face another way to represent another character speaking, all of which would be unoriginal and exhausting, audiences infer what the other characters might say. Also, the playwright avoids the overused device of characters speaking to the audience in one-person shows.

When the play begins, Gerry’s ex-boyfriend, Dwayne, and Dwayne’s current boyfriend, Mack, are enjoying some quiet time poolside. Suddenly, the big man bursts onto the scene like a charging bull clearing everything in its path. Soon, he’s loudly criticizing everybody from Cochella hippy people to Queen Latifah and Betsy Ross.

Clearly, though, Gerry has more on his mind this night than the dress code. He has a secret that I won’t divulge here, and the notion of same-sex weddings happening regularly apparently makes him happy. But, it has also given Gerry pause.

He says: “Gays just getting married right and left. Ha, ha, ha. Yay…?! No, honey, please, are you kidding? No, I’m happy for them! I just don’t know if I am happy for…us. It’s like, OK, great, what’s next? Aren’t you guys just a little bit scared? Yeah, scared. Well, I don’t know, like, all of a sudden we’re in this, like, race toward normal. Whatever the f—k that means. It’s like normal? Who wants to be normal? I don’t want to be normal.”

Many might say Gerry isn’t. And you have to laugh when he says “This weekend? No drama. OK? Noo drama. I’m not gonna have it. I’m not gonna stand for it. OK? I just won’t. Nope. Nope. Pure fun.”

Well, up to this point, Gerry has given us pure fun and drama with his unpredictability and energy.

At one point in the play, we learn that, as a youngster, Gerry’s Sunday School teacher called him a “thespian.” A knock on this play is that we never learn what Gerry does for a living, while unnecessarily learning a minor character's vocation. But while Gerry’s job remains a mystery, he is, without question, a natural thespian. Some people are adept at hiding their emotional pain beneath a façade of confidence. Gerry is such a person.

And to actor Thomas Mark’s credit, he not only expertly conveys his character’s flamboyance and oversized personality, but also his vulnerability.

During the play’s first act, Mark, gesturing heavily, dancing, downing liquor with abandon, and modulating his voice to sound different, imbues Gerry with a tireless charisma and versatility. Impressively, it never feels as though the performer is trying to garner applause from the audience. Rather, Mark makes Gerry’s over-the-top antics seem organic to the character.

But as hyper as Mark plays Gerry in the first act, playing him as a man in perpetual motion, the actor also excels at applying the brakes in the second act. It is then that Mark gives Gerry a convincing and touching restraint and vulnerability. He talks about an incident from the past as though it just happened. If there’s a knock on Mark’s performance, he doesn’t speak with a convincing southern accent, despite the fact that Gerry hails from Georgia.

But credit director Michael Leeds for helping Mark find the right balance between understated sensitivity and brashness. Also, Leeds adds variety to the proceedings by moving Mark around the stage, never allowing his character to become a talking head.

In addition, scenic designer Jodi Dellaventura deserves kudos for her detailed, mood-establishing set. She includes bright colors, and, well, bold patterns, creating not just a visually attractive set but one whose colors and shapes seem congruent with Gerry’s colorful personality.

Meanwhile, costume designer W. Emil White has outfitted Mark with a shirt that is colorful without calling too much attention to itself.

Lighting designer Ardean Landhuis’ bright lighting provides focus. And its brightness makes sense, given the upbeat tone of the production.

One shortcoming of Bright Colors and Bold Patterns is that the wedding planners never get to defend themselves against Gerry’s assertion that requesting no bright colors or bold patterns essentially means “God hates fags.”

But audiences are sure to love Island City Stage’s first-rate production. That is, mostly, thanks to a tour-de-force, bravura performance from an actor of whom the South Florida theater community doesn’t get to see enough.

Island City Stage’s production of Bright Colors and Bold Patterns runs through June 29. People will be able to stream the production from June 23-29. Performances are at 8 p.m. Fridays and Saturdays, as well as 5 p.m. Sundays. All performances take place at Island City Stage, 2304 N. Dixie Highway in Wilton Manors. For tickets and information, call (954) 928-9800, or go to www.islandcitystage.org.