Oslo on HBO a Riveting Drama 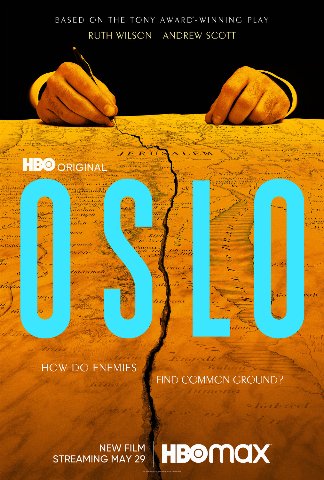 If this Covid -19 pandemic has taught us anything it’s forced the American viewing public to think outside the traditional creative arts box when it comes to entertainment.  “Streaming” was not a familiar term a couple of years or so ago, unless one was speaking of water or possibly flags streaming in the wind on National Holidays.

Today “streaming” is how a majority of Americans view their entertainment options at home.  But the light at the end of this runaway train nightmare pandemic is finally coming into sharper focus as long as we continue to follow the CDC guidelines.   Vaccination is free and relatively painless and it contributes to the health and well-being of all Americans.  It works!  Do It!

It’s anticipated that most brick and mortar venues will open in 2022.  In the meantime one can still enjoy quality stories and productions via, streaming services.  For anxious brick and mortar theatre owners, however, their concerns about returning audiences is an unknown X factor.  Will audiences indeed return or stay at home and view plays on film with a snack and a beverage? Time will tell whether live theatre audiences, moviegoers, and the moviemakers themselves, will win the fancy of future fickle audiences.

The “theatre” has long been the province of the playwright and the actors.  Movies, on the other hand, belong to the vision of the director.  Thanks to the breadth and sweep of the motion picture camera the movie industry’s technical wizards bring the insights and emotions of the screenwriter, the actors, and the director front and center in producing astonishing scenes with mind-blowing Hollywood-style CGI techniques.

The camera with its creative and powerful use of movement and the intimacy of the close-up would appear to have an audience advantage.  Each medium, however, has its fans and followers. For variety, why not embrace both mediums, where and when possible, making the choice a win - win entertainment decision?

Savvy heavyweight Hollywood movers and shakers like Steven Spielberg, Marc Platt, Kristie Macosko Krieger, producer Mark Taylor, and director Bartlett Sher lend their considerable talents and heft into a timely remake of the 2017 Tony-winning stage production “Oslo”.  The Oslo movie version of 2021 is also written by J.T. Rogers from his eponymous stage play, along with new inputs as a way of sharpening and updating the dialogue by Rogers and others.

We live in an ever changing society.  What passed for questionable dialogue a generation ago is now woefully considered passe and behind the Times. Today, four letter word expletives are increasingly being hurled from the stage as well as from the TV and movie screens.

Think of all the film and plays we’ve seen in our lifetimes…how did we ever survive or enjoy those plays  and movies without using those expletives in dialogue compared to now where every other word to describe what is happening begins or ends with the letters ‘F’ or ‘S’.  Back in the day it was the job of the actor to breathe life into the characters created by the playwrights or screenwriters.  But I digress…

The movie version of the Tony-winning “Oslo” stage play follows the plotline pretty faithfully.  The difference comes in the editing of the talky stage version that ran a tad over three hours.   The 2021 film production only runs about two hours.  Having seen both stage and film versions I would be hard pressed to favor one over the other. However, when the story elements and the performers engage the audience, the litmus test of acceptance and success is when the performance time-elements seemed to have whizzed by.

The story of “Oslo” is how one international ‘shadow diplomacy’ coup – one that that actually worked - was ‘touch and go’; based on true events that revolved around the 1993 Oslo Peace Accords.  The shadow diplomacy occurring in the film became a fraught tool with secret negotiations taking place in distant Norway between trenchant enemies Israel and the PLO who were forbidden to acknowledge even the existence of one other, let alone discuss a covert peace plan for the Middle East.

The air in the initial meeting fairly crackles with electricity and pent-up emotions, along with nervous energy and uncertainty.  The characters appear to be walking on eggs and holding their breath waiting to see what happens next in this intriguing and griping drama - just like we the viewers.  Its great stuff and so compelling to watch.

We can all thank a secret back-channel operation created and brokered by Norwegian husband and wife team of Mona and Terje Jull - who are brilliantly portrayed by Ruth Wilson and Andrew Scott  - covers two years of facilitated discussions.  It was one of thorniest and incendiary-filled series of meetings ever undertaken by sworn enemies who rise above their personal feelings to come together in safe and neutral Norway, in the name of world peace.

The word “trust” was a key word that kept the participants coming back to their secret meetings.   The ground rules laid down by facilitators Mona and Terje Jull were only that the four diplomats present would be responsible for advancing forward the peace process.  The only gathering and interactions of everyone occurs outside the meeting room at mealtimes and during personal time and relaxation.

Getting to know one another as human beings and “friends”, helps grease the wheels of understanding and generates a sense of trust in one another which becomes the mother’s milk of their dangerous undertaking.  Despite the seriousness of what’s at stake, there are light moments that run throughout the movie… just as in real life.

In defense of no spoiler alerts here, it would be better if readers of this review search out the date and time of HBO’s next scheduled screening.  “Oslo” is an important film that will resonate with many because it’s 2021 ‘déjà vu’ moments that are currently playing out in the Middle East to a shaky cease-fire agreement between Hamas and Israel.  The burning question for all is:  Will this latest attempt for a peace process hold?

The beauty of this movie relies on the collaborative efforts of many talented individuals.  If one buy the premise of the story then you will probably buy the bits it takes to accept it.  “Oslo”, the 2021 movie is blessed with a sublime cast of highly skilled and creative professionals.  Some you will recognize, others will be newcomers to the American viewing public, but all will be remembered.

I consider this casting aspect to be a plus for viewers. The ring of authenticity as to what takes place at these meetings has been scrupulously researched by screenwriter J.T. Rogers, and is smartly and deftly directed with insightful and creative touches by Bartlett She.  Shout-outs also, for the inventive, lush, photography of Janusz Kaminski and to Jay Rabinowitz for his effective and nicely paced film editing.

The ensemble cast responds accordingly with a series of nuanced and finely judged performances. The aforementioned actors: Ruth Wilson and Andrew Scott lead a list of wonderfully dedicated actors that include: Salim Dau as Ahmed Qurie; Waleed Zuaiter as Hassan Asfour (both speaking for the Palestinian side); Jeff Wilbush as Uri Savir; Yigal Naor as Joel Singer; Doval’e Glickman as Yair Hirschfield; and Rotem Keinan as Ron Pundak.

This HBO production, which no doubt, will be rescheduled is well worth the wait.  Quality filmmaking is still available for those who are not only discerning, but are patient as well.   A note of caution however.  “Oslo” has a boatload of expletives running throughout the film.