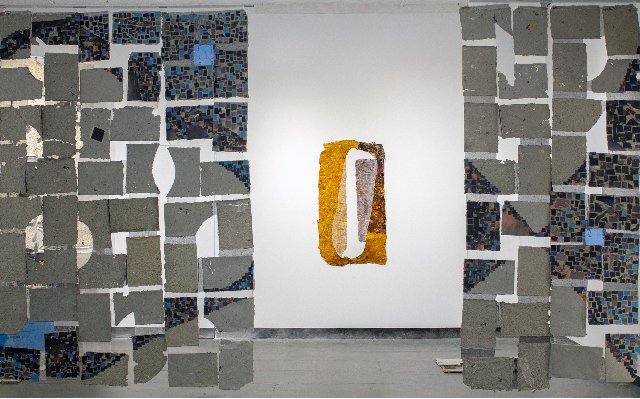 Sections is a solo show of Julia Rooney’s paper works. More than works on paper, these are works of paper—made entirely from an archive of New York Times newspapers which Rooney collected between Nov. 2016 and Nov. 2017. The pages are pulpified and molded into stiff blocks; pigmented and collaged into colorful wall works; and quilted into curtain-like structures which are suspended from the ceiling and create enclaves within the larger room.

In all these strategies, Rooney transforms the newspapers from text-heavy documents into visual/sculptural objects with only fragments of text peeking through. With the prose scrambled or obliterated, we are left to contend with the paper itself, a material increasingly at odds with digital modes of news media production and consumption.

As a title, Sections riffs off the organizational structure of a newspaper—a structure which is palpably felt in print editions where each section is folded separately and sandwiched into the others. This concept plays out spatially across the gallery, as the walls, floor and ceiling each become uniquely activated by the work installed on them.

Across the width of the gallery, Rooney suspends two sets of paper-screens made from newsprint that has been pulpified and molded into new sheets. On the east side of the gallery, the sheets are stiff and sizable like tablets or computer screens, while on the west side, the sheets are thin and postcard-size. In both sets of screens, the sheets are quilted together to form modular strands which, when strung side-by-side on dowels, function like curtains in the room.

Despite expanding to great dimension, they are nimble structures which fold up and may be rearranged according to the space. Installed across the width of this gallery, the screens create various interior sections within the larger environment, ones which visitors may peer between as they choose where to situate themselves. As such, there is a constant play between inside/outside, front/back, opaque/permeable.

A floor-piece snakes around the two sets of screens. Individually-cast paper blocks are arranged to roughly mirror the screens’ geometries, and to trace the floor’s own tile-work. The blocks themselves range in size and shape, but all bear a relation to digital devices and their respective parts: phones, tablets, screens, pixels. Modular and endlessly rearrangeable, each block feels like it has multiple versions of itself. And despite this regularity, each block is also unique in tonality and texture—some smooth, others rough, some sun-bleached, others a cool gray.

These qualities reveal Rooney’s working methodology: a labor-intensive and repetitive process of shredding by hand, pulpifying by blender, and casting by mold. Working over many months, both inside and outside, meant that each block became exposed to slightly different conditions of weather, light, pressure, and time.

Flat wall works punctuate the space with vibrant color. Rather than applying paint on top of the paper’s surface, Rooney used pigmented adhesives to infuse the paper grain with color, at the same time that the adhesive glues together the paper fragments into larger forms. All except one resemble a frame— a shape which is defined as much by the negative space at its center as it is by the positive space of the frame itself. Left empty and mounted directly on the wall, these pieces evoke a sociopolitical condition whereby the frame of the media becomes its own subject.

During a period when the dichotomy of “true/false” has permeated the field of journalism and media at large, these paper works do not subscribe to either classification. Perhaps their “truest” quality is their materiality as paper. And while this fact may seem obvious, Rooney achieves a range of texture, scale, tone and mass which pushes this material fact into an imaginative and transformative space. Herein lies a related premise: the idea that committing to fact-driven research does not yield binary conclusions, but rather leads to greater complexity, greater debate and greater nuance.

Julia Rooney (b. 1989, New York, NY) is a visual artist and arts educator. Though rooted in painting, her practice often bridges other disciplines, including writing and collaborative, community- based projects. She holds an MFA in Painting/Printmaking from the Yale School of Art and a BA in Visual and Environmental Studies from Harvard College.