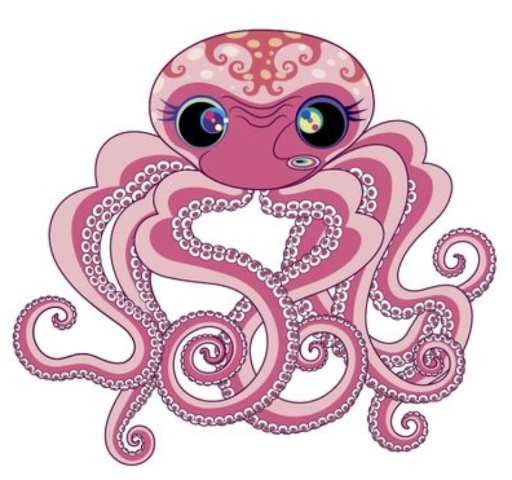 Images courtesy of the artist and Museum of Contemporary art with the exception the following two. 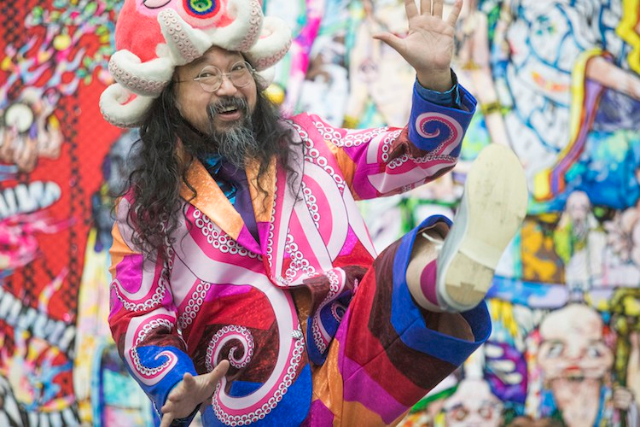 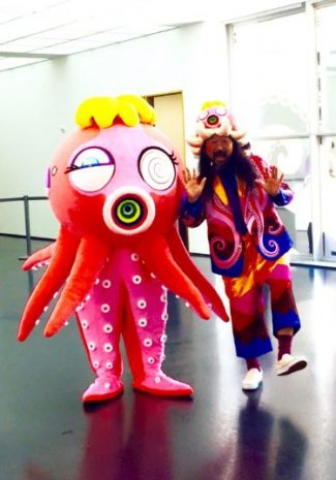 The artist with his mascot. Nancy Bishop photo. 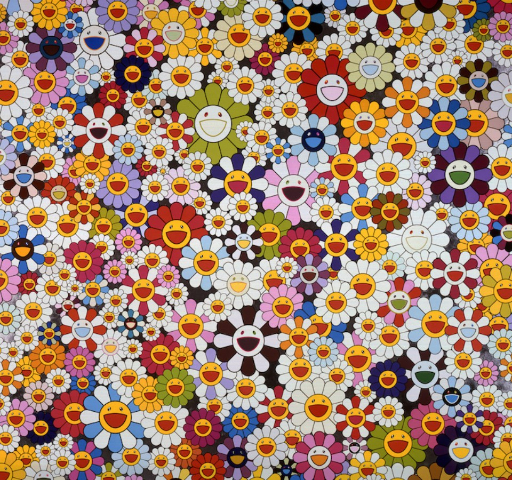 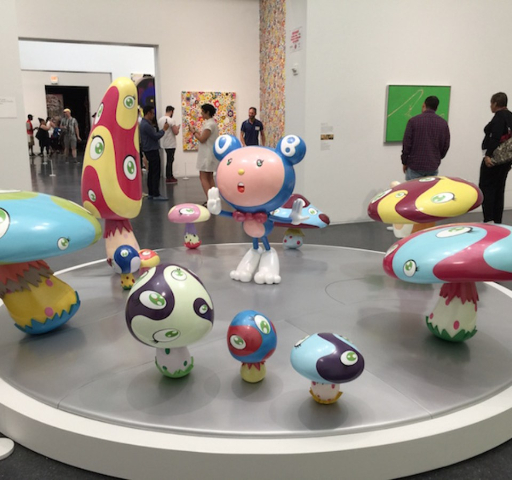 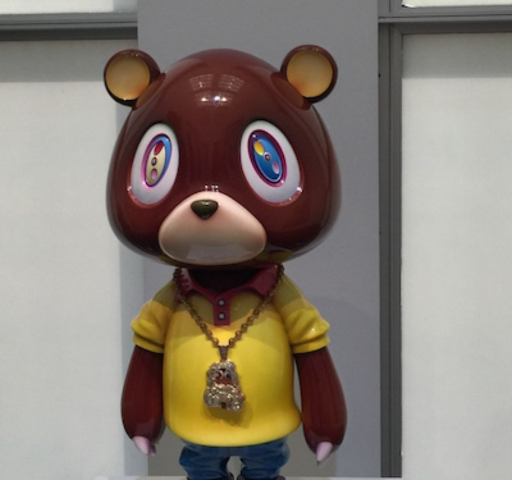 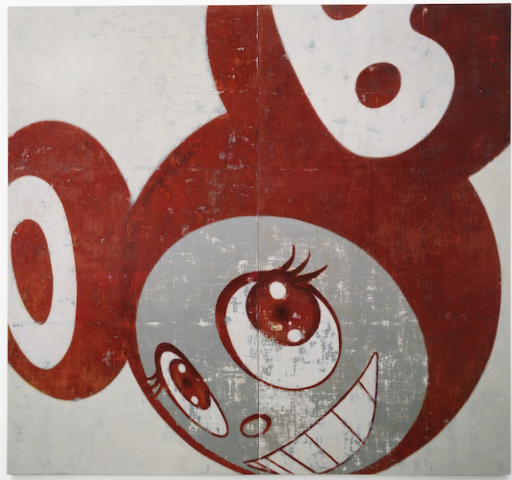 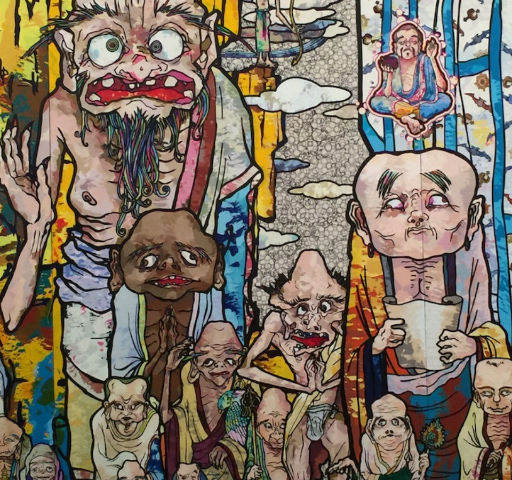 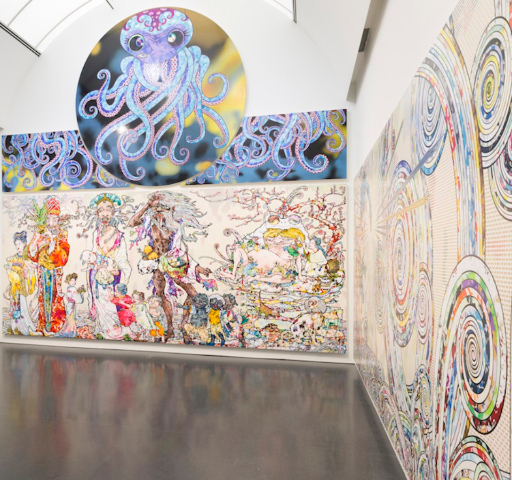 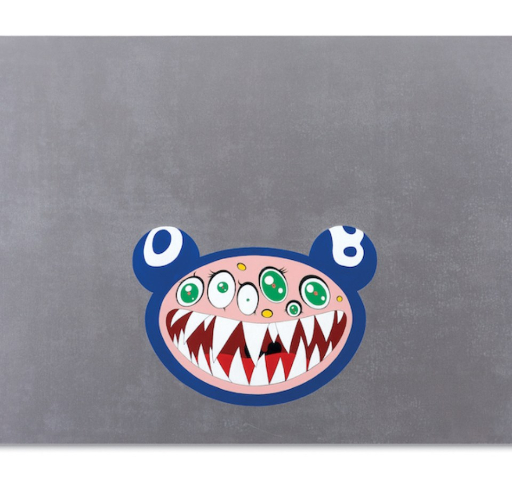 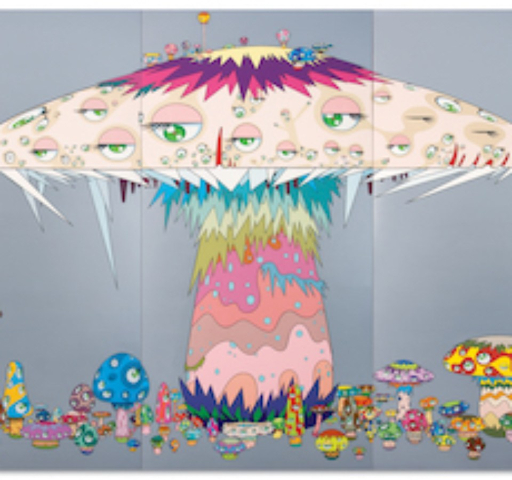 Be prepared for your visit to The Octopus Eats Its Own Leg, the new exhibit of work by artist Takashi Murakami at the Museum of Contemporary Art. Your head may explode with his bubblegum colors and fantastic imagery and ideas.

Murakami is best known for his work related to Japanese anime and manga, as well as his sweeps into commercial and pop art and collaborations with artists such as Kanye West and Pharrell Williams. During last week’s press preview, he was articulate in discussing his work and his inspirations with curator Michael Darling (although the artist occasionally needed help from his translator).

Later he circulates throughout the exhibit and poses and dances for preview guests with his “mascot,” the octopus. But his story is much deeper and delves into imagery rooted in Japan’s history and tragedies.

The exhibit title refers to an old Japanese adage that says an octopus can survive for a while by feeding on itself but eventually the leg will regenerate itself and life will go on. For Murakami, this applies to postwar Japan, when the country had to feed on itself culturally and economically before it was able to move forward, and to his own practice, which constantly recreates old motifs and ideas into new forms.

The exhibit is spread over the MCA’s entire fourth floor and organized more or less chronologically, according to the changes in Murakami’s style and subject matter. We see a few very dark paintings that allude to the U.S. nuclear attacks on Japan in 1945 and to the 2011 tsunami, earthquake and Fukushima disaster. But most of the exhibit is exuberant, humorous and vividly hued. Imagery such as smiling flower faces and his Mr. DOB character appear in many of the exhibit rooms.

Two new works are on view for the first time. A monumental sculpture and a painting, both inspired by The Octopus Eats Its Own Leg. The sculpture, which returns to the subject of the 2011 disaster, depicts a giant stylized waterspout with skulls among the waves. The painting is 114 feet wide and made up of 45 panels created in Tokyo and shipped, unfinished, to the MCA last week. Murakami’s crew completed the final finishing and mounting at 2am Friday, the day of the press preview, according to MCA staff.

Murakami’s interest in his own branding is evident in his 1990s creation, Mr. DOB, the artist’s cartoonish alter-ago, based on Japanese comics. Mr. DOB is represented in many ways throughout the exhibit, but his features always retain a resemblance to Mickey Mouse with bulbous head and round ears. Examples are And Then, And Then And Then And Then And Then (Red), 1996, as well as DOB’s March, Tan Tan Bo, and Tan Tan Bo Puking. A display of small sculptures, titled DOB in the Strange Forest (Blue DOB) 1999 shows Mr. DOB with mushroom figures, created in plastic, resin and fiberglass. (See images in sliders as well as throughout this text.)

Another section of the exhibit is dedicated to Murakami’s idea of the superflat, in which he flattens the differences between high and low culture and attempts to democratize art. Superflat is a reference to mid-century Japan, known as a producer of saccharine consumer products such as Hello Kitty and comic book geeks as drivers of contemporary culture.

Murakami always maintains his “Japanese-ness.” In the 2000s, when he collaborated with fashion houses such as Louis Vuitton and pop artists such as Kanye West, he also reverted to his passion for Japanese history. He painted works such as 100 Arhats (2013), a 32-foot wide work painted in acrylic, gold and platinum leaf on canvas. The arhats were a legendary band of Buddhist monks who roamed Japan healing and comforting people. The painting shows the arhats in great detail; see a section of the painting in the slider.

MCA chief curator Darling has known and worked with Murakami for 20 years, and curated the American presentation of the artist’s Superflat exhibition at the Museum of Contemporary Art, Los Angeles, in 2001. In his excellent essay in the exhibit catalog, Darling notes that Murakami resists pat explanations for his work. For instance, “he prefers conundrums for the titles of his works too, willfully leading interpretation in directions not obviously connected to the imagery on hand.”

Regarding the octopus-eating-his-own-leg adage, Darling sees Murakami “in a state of constant stress, boxed in between East and West, success and failure, praise and neglect, ancient and modern, and in turn, he has often had to go back into his catalogue of motifs and references, chew them up and spit them back out in a newly reimagined form.”

QUICK TOUR: It’s a large exhibit, but these are the pieces that to me are worth spending time with. If there’s a bench, sit down and contemplate them.

Super Nova (1999). Mushrooms are popular in Japanese art history and this painting is psychedelic, maybe even hallucinatory.

DOB in the Strange Forest (1999). Sculptural group– a magical circle of mushrooms with Mr. DOB.

100 Arhats (2013). Richly detailed and colored and full of interesting characters.

After the exhibit closes here, it will travel to the Vancouver Art Gallery in winter 2018 and to the Modern Art Museum of Fort Worth in summer 2018.

Takashi Murakami: The Octopus Eats Its Own Leg runs through Sept. 24 at the Museum of Contemporary Art, 220 E. Chicago Ave. General admission is $15 (free for members) and $8 for students, teachers and seniors. Illinois residents are admitted free on Tuesdays. The museum just announced its summer hours: it’s open until 9pm Tuesdays and Fridays.

All photos courtesy of the Museum of Contemporary Art, except where otherwise noted.