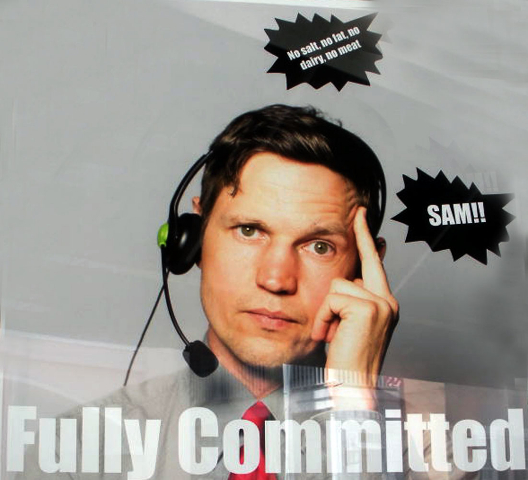 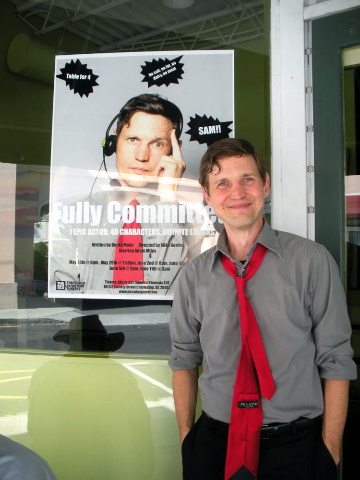 The Threshold Repertory Theatre in Charleston, South Carolina presented the hilarious and zany "Fully Committed" as a 2016 Piccolo Spoleto offering which was a festival favorite with sold-out performances.

This 99-seat black box theater has provided top notch entertainment to its fans and this reviewer will attest to being one of them. The productions are always mounted well. Seating is comfortably close to the performers and you can get a refreshing drink and snacks at its bar. Tickets are affordable and parking is a convenient. This encourages people of all ages and levels of mobility to enjoy lively theater.

The mission of Threshold Repertory Theatre is to inspire and inform  through classic and contemporary plays. The theatre was founded in 2010.

Courtney Daniel is Executive Director of Threshold Repertory Theater. Muli-tasking as a bartender she is a gracious hostess to visitors.

Fully Committed is the expression used when a restaurant has met its capacity. No one including the rich or famous can sneak under the radar of the host Sam Peliczowski. He is played by multi-talented impressionist extraordinaire Adam Miles. The actor is well known in Charleston for his many starring roles.

it's amazing how art imitates life and life imitates art. Miles in real life must have endured some non-appreciated positions to be able to follow his acting career.

Miles conveyed a physical and vocal work-out as he jumped up and down manning phones and intercoms. For about 90 minutes he portrayed some 40 characters in this mad-cap  piece. He could be shrill as a lady or gruff as his dad while waiting for the temperamental chef to bark orders.

There were a few subtle story lines weaving through the show. Sam's dad wants him home for the holidays> Being on bottom of the pecking order, however, made his dad's plan futile. Until, that is, Sam's co-worker Bob needed a favor and Sam got to go home to his dad.

It emphasized yet again that who you know in life makes our journey a bit easier. Sam's patience with a patron set on getting a reservation paid off with an introduction to a man who could advance Sam's acting career.

Then Sam was given the chance-of-a-lifetime to sing "The lady is a Tramp" to the woman of a Mafia Don. woman. Historically gangsters  have handed crooners fame and fortune on a silver plate. Think Old Blue Eyes. No horsing around intended!

The director Michael Korek not only directed the one-man show,  but he was basically a one-man technical staff. He was assisted by Shawn McIntosh. The reservation table setting worked well and was well lit with  perfect sound.

Fully Committed held you at the edge of your seat anticipating the next vocal acrobatics challenged by a distinctively  female voice or a person from another country accent. And Miles added some appropriate gestures to highlight the person he is impersonating. Becky Mode penned a play that rings true today as well as when it was written in 2001.

The restaurant business is a tough. Today it is feature rock star chefs with huge egos. That's what it takes to raise money that flocks to fame and glory.

On  Broadway  Fully Committed features Modern Family star Jesse Tyler Ferguson. With this production we enjoyed a top notch performance down home in little old Charleston. It was a wowzah of an evening not to be missed.