Annual Theatre Event from September 22 to 25 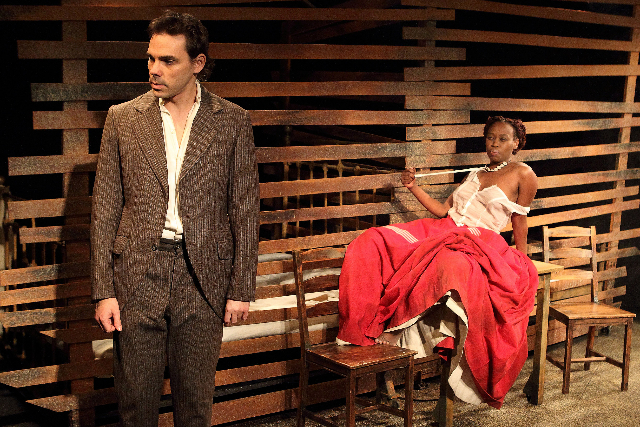 Desire Under the Elms. Photo by Pat Bromilow.

Both playwrights thrived in Provincetown’s atmosphere of artistic freedom. O’Neill is recognized as the first American playwright to break through the conventions of form and language of the American theater of his time, winning the acclaim of Broadway audiences and critics.  Twenty-five years later Williams was highly lauded when he broke through the conventions of his own time.

But beyond success, they were both more daring in works that weren’t as appreciated.

TW Fest Board President Patrick Falco said, “We invite all to our beautiful town for the full festival experience -- to put their toes in the sand, watch the sunset over the harbor and be excited to discover the O’Neill and Williams they don’t know.  We’ll present some of their most experimental, counter-cultural plays performed by contemporary theater artists who are themselves breaking conventions.”

David Kaplan, curator of the TW Fest, announced the new season line-up:   “Both O’Neill and Williams at the height of their success – while winning Pulitzer Prizes and scoring Broadway hits – went beyond success to experiment with burlesque and cartooning, sentimental songs, Asian ideas of theater, and attacks on money-grubbing aspects of American culture. Their unconventional work seems to be speaking to us today especially in this election year.”

“Our program will fascinate audiences with unexpected interpretations of these great American dramatists.  As their words echo from play to play and into our heads and hearts, we can all delight in a greater understanding of these masterful playwrights.”

Some of the season’s shows include a production of O’Neill’s Desire Under the Elms coming from South Africa with a diverse cast; the dynamic and athletic The Hairy Ape from Philadelphia; Marco Millions with a cast of musician/actors; as well as Williams’ A Perfect Analysis Given by a Parrot performed with puppets and live actors and In the Bar of A Tokyo Hotel, an avant-garde production from New York, directed by Everett Quinton, from The Ridiculous Theater Company.

Desire Under the Elms

The story of O’Neill’s 1924 tragedy about a stepson’s passion for his stepmother is set in New England.   South Africa’s Abrahamse and Meyer Productions moves the play’s setting to Cape Town where a Boer farmer brings home a black bride.  Afrikaans-inflected English brings new musicality to O’Neill’s spare dialog of repression and release.

Festival audience favorites Abrahamse and Meyer Productions have brought their award-winning interpretations of Williams’ plays to past Festivals, including The Milk Train Doesn’t Stop Here Anymore and Kingdom of Earth.

A debutante visits the underbelly of her luxury ocean-liner to observe the soot-covered workers as if they were animals. The revelation of his low social status tragically upends the self-perception of the coal stoker boss. O’Neill’s daring 1922 text vaulted beyond the realism of his earlier plays to forcefully dramatize the human cost and terror of the rapidly mechanizing twentieth-century.

A burlesque retelling of the life of Marco Polo casts the 14th century Italian adventurer as an avatar of a Roaring 20’s tycoon. O’Neill’s take-down of an American value system, in which making a profit trumps all else, stings ninety years after it was written.

The Here and Now production is performed by a band of musician/actors and directed by Talya Klein. Klein is a graduate of the Brown University/Trinity Rep MFA Program.  She is the founder of The Here & Now in Vermont, which produces one-off, site-specific theatrical events there, and now here for TW Fest’s Marco Millions.

O’Neill’s groundbreaking 1920 play, Anna Christie, reveals a woman whose life is a performance: daughter, lover, whore.  In this production, three actors from Central Russia and a virtuoso Russian pianist reimagine the story through dance, song, Russian dolls, and dialogue.

Tango Christie is adapted from Anna Christie as well as directed by Alla Korovkina.  It will be performed in Russian by Dr. Chekhov’s Theater Ensemble with over-sized titles projected in English. Original music and songs are by pianist/composer Vasily Tonkovidov.  The choreographer is Victoria Maximova.

The 1923 silent movie of O’Neill’s hit play about a hooker who reinvents herself, stars Blanche Sweet and William Russell as the sailor she falls for.   This was the first adaptation of a play by Eugene O’Neill. The film will be shown outdoors at night on the beach of the Provincetown Bay, with live piano accompaniment

In the Bar of a Tokyo Hotel

A happy hedonist wife has come to the end of her patience with her husband, a forever-experimenting artist. The late 1960s resounds throughout Tokyo Hotel in masterful staccato rhythms, which serve as breaks in the lilt of Williams’ earlier dialog, like a hesitation waltz.

Last year’s Festival audiences will recognize the themes of Williams’ The Day On Which A Man Dies which he wrote a decade later, inspired by what he’d learned about Noh Theater from Yukio Mishima.

In this play Williams sets up camp on O’Neill’s turf: a bar at the edge of the world, shrouded in ocean fog, in which a collection of misfits huddle like birds evading a storm. Unlike O’Neill’s eternally damned pipe-dreamers, Williams’ crass menagerie of barflies -- an itinerant beautician, her loutish boyfriend, a lovesick short-order cook, the girl he’s love with, and an alcoholic doctor -- survive on hope and the possibility of heaven.

This production is directed by Patrick Falco, featuring Gail Phaneuf and Joe Macdougall.

Kirche Küche Kinder (An Outrage for the Stage)

In this dark comedy, an Irish hustler, married to a Lutheran preacher’s daughter, brings up his nubile children to sell in the priciest neighborhoods of Manhattan. The title is Williams’ twist on the German admonition that women devote themselves to children (kinder) kitchen (küche), and church (kirche).

The Festival offers the first production of this raucous song-filled comedy since 1979, the year Williams wrote it.  It will be workshopped by our Tennessee Williams Institute partner, Texas Tech University of Lubbock, Texas. Directed by Robertson Dean, featuring Rachel Hirshorn as The Wife. Thomas Keith, who worked with Eve Adamson, the original director of the play, will serve as dramaturg.

Williams’ A Perfect Analysis Given by a Parrot  with O’Neill’s Welded, Act 2, scene 2

These paired plays explore the two playwrights’ understanding of a good-time girl. Williams introduces us to two ageless goodtime girls out for a good time in a desolate East Saint Louis juke joint. O’Neill’s understanding of a good-time girl was quite different – a scene from Welded stands alone as a moving portrait of unexpected redemption when a footsore young streetwalker teaches an errant young husband how to get through life.

Directed by Fred Abrahamse for the Festival and performed with puppets and panache by South Africa’s Marcel Meyer and St. Louis raconteur Ben Watts.

Jef Hall-Flavin, TW Fest Executive Director added, “Provincetown is rated as one of the best small towns in America and as part of the total experience of this Festival, we make sure folks get out and about to the most interesting places, to mingle and laugh with actors, to have a cocktail watching an astounding sunset over the water, to be moved by music and inspired by art.”

For Saloon Songs, the artists of the Festival will sing to live accompaniment in saloons around town. Expect stirring, sentimental, sexist and sometimes silly songs -- including barroom standards “Danny Boy” and “Whiskey Johnny” – which were written in stage directions by O’Neill and Williams.  These were sometimes placed satirically or meant to carry emotions that cannot be spoken onstage.   John Thomas is the director and accompanist.  Also expect a visit to our saloons by Stage Moms -- Eugene O’Neill and Tennessee Williams mothers -- written by Larry Dean Harris featuring Paula Fins and Mil Nicholson.

­­“We have a lot of fun, but we also explore the deeper, more profound aspects of the drama of these master playwrights,” Hall-Flavin continued.

“Through our very popular Tennessee Williams Institute (TWI), graduate and undergraduate level students witness our performances and delve into them in seminars and workshops with renown scholars and theater creatives. These theater professionals of tomorrow will never look at Williams the same way again.  They will understand that the full breadth of his work went beyond his classics and that he was always pushing the boundaries of theater with experimental work.”

Dowling, serves on the editorial board of The Eugene O’Neill Review and the Eugene O’Neill Society board of directors. His biography, Eugene O’Neill: A Life in Four Acts (2014), has earned accolades for cultivating new insights into the life the Pulitzer and Nobel Prize winning American dramatist and was a finalist for the prestigious LA Times Book Prize. He is Assistant Professor of English at Central Connecticut State University.

TWI is also honored to be hosting special guest Lee Breuer, founding co-artistic director of New York’s Mabou Mines.  Breuer is a writer, director, poet, and playwright engaged in a lifelong procession of experimental theater projects including the smash hit interpretation of A Streetcar Named Desire at the Comédie Française in Paris in 2011.

Hall-Flavin continued, “This year we’re very excited to begin a new program for high school students:  Immersion: A half-day experience with a production and artist interaction.”

David Kaplan added, “And as Provincetown is the oldest continuous art colony in America, the Festival celebrates the importance of art to the playwrights then and to our audiences today with our Festival Spotlight on Art.”

This year the Fest spotlights the illustrations of Miguel Covarrubias, born in Mexico City in 1904, who created a body of work that broke through conventions of subject and style throughout the 1920s and 1930s.  Covarrubias’ artwork and caricatures of influential politicians and artists were featured on the covers of The New Yorker and Vanity Fair. A personal friend of Eugene O’Neill’s, with whom he visited Harlem during its 1920s Renaissance, Covarrubias was introduced to New York bohemian society by Carl Van Vechten, the author, critic, and portrait photographer. A decade later Van Vechten would photograph Tennessee Williams and his circle of friends.

Other artists whose work will be exhibited during the Festival are: Julianne Papetsas who has been commissioned to commemorate the Festival’s events with woodcuts that memorialize the original Eugene O’Neill productions; Bill Evaul, whose white-line woodcuts represented Tennessee Williams and his plays during the 2012 and 2013 seasons and who this year creates a woodcut of Eugene O’Neill; and photographer Ride Hamilton who has documented the backstage life of Festival performances from Mississippi to Manhattan since 2012.