Trash Talk in the Berkshires 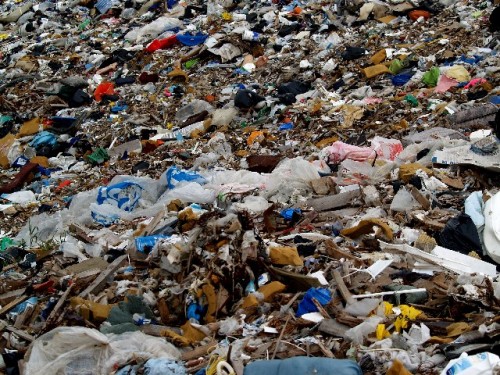 Cleaning up the Planet.

My wife and I own a little cottage on about eight acres of almost pristine deciduous forest in the Berkshire Hills of western Massachusetts.  The Williams River runs along the eastern border of our property, and Route 41 for a few hundred feet along the western edge.  On the other side of the road from us the land rises abruptly.  On our side it slopes downward at about the same steep angle.  The result is that just about any trash that’s tossed from moving vehicles ends up on our property.  Once a year, after the snow melts but before the ground is covered with new undergrowth, we have a cleanup day to pick it all up.

One weekend this past April we filled four 33-gallon heavy-duty lawn-and-garden bags with litter, which comes in four basic categories.  Here’s the list, arranged in order from mildly disgusting to noxious:

Paper.  In this category are the ubiquitous McDonald’s wrappers, paper cups, candy wrappers, cigarette packs, etc.  The gem of this year’s collection was a complete vocal score to Mendelssohn’smagnificent oratorio,“Elijah,” property of the Tanglewood Festival Choir.  (Note to TFC:  If you were wondering where the copy went, now you know.  Why someone would toss such hallowed music from a moving car, however, is anyone’s guess.  Must’ve been a tough rehearsal.) I don’t mind paper trash too much.  It biodegrades pretty quickly and it isn’t dangerous to humans or other living things.

Aluminum.  Most of this category, as you would imagine, comes in the form of beer cans; and of the beer cans, most of them are very cheap brands, which tells you something about the demographics of those who can’t resist tossing them from moving cars.  The more socially conscious contributors have graciously gone to the trouble of crushing them before throwing them out their windows onto our woods.  On the other hand, some of the more inebriated donors didn’t even bother to open the cans.  You would think that people who are too cheap to buy decent beer would be reluctant to toss away the cherished fruits of their hard-earned money.  Go figure.  I even wonder if we were lucky enough to have been spared a few cans by some drinkers who simply forgot to open their window before trying to toss their cans.  I hope so.  Aluminum cans are more of a problem than paper products.  Their life span is considerably longer and there are some potential sharp edges; but still, things could be worse.

Glass comes under the heading of things that could be worse.  Some of the bottles—juice bottles, soda bottles, beer bottles, liquor bottles—that get tossed onto our woods remain miraculously intact.  I can dispose of these easily.  I can even gingerly pick up some that are broken in only a few pieces without too much fear of serious laceration.  A lot of them, though, too splintered and too scattered on the forest floor, are impossible to collect.  These lethal shards of glass present a clear and ever-present danger to the wildlife that inhabit our woods: chipmunks, squirrels, rabbits, woodchucks, deer, bear, birds of all sorts including owls and turkeys, and the occasional human child.  Also, glass doesn’t go away as fast as paper or aluminum.  It lasts for a long time.  But not as long as—

Plastic.  Plastic seems to last basically forever, give or take a few millennia.  We amassed an enviable collection of plastic candy wrappers, drink containers (including the straws), plastic bags, detergent containers, anti-freeze containers, Styrofoam everything, those tiny shot bottles of liquor people love to drink while they drive, a ten-inch plastic wheel that might have come off a wheelbarrow, etc.  Discarded plastic products are pretty disgusting, including the seemingly innocuous plastic bag.  When animals are lucky enough not to choke on them or get strangled by them, they can end up in the animal’s gullet and gradually fill up its digestive tract, making the animal unable to devour enough nourishment to survive.  Slow starvation, but not nearly as slow as plastic takes to degrade. Let me state in the interest of fairness that plastics are now being developed using plant materials that biodegrade quickly.  They occupy a small fraction of plastics currently produced.  The day that use of biodegradable plastics becomes universal can’t come soon enough.

Just to be clear, I’m not blaming the manufacturers of these products for creating this mess that my wife and I clean up every year.  That blame rests squarely upon the shoulders of the morons who don’t have the brains of a flatworm and who throw all this junk out their car windows.  I have no sympathy for these idiots who make the world a worse place for everyone, and I hope that someday they’ll get their just desserts.

What I do blame the producers for, and those companies who package their products using environmentally destructive materials, especially plastic, is how they attempt to justify their use of them by proudly trumpeting, “It’s recyclable!”  I’ve written a few of these companies, and that’s what they invariably say.

It’s baloney!  I’ll prove it.  As I said earlier, in our 250-foot border with Route 41 we picked up four 33-gallon bags worth of garbage which was not recycled.  If you average that over one mile, that comes out to about eighty-four bags.  The distance between West Stockbridge and Great Barrington is about ten miles, so now you’re talking about eight-hundred-forty bags of unrecycled, mostly non-biodegradable garbage.  Every year.  And this is on a lightly traveled country road.  Go ahead, do the math.  Add up the road miles across the country and multiply it by the number of years this stuff has been produced.  Did you know that in the middle of the Pacific Ocean there’s an area no smaller than the size of two Texases and perhaps as big as the whole United States that is a floating garbage dump of plastic alone?  Look it up.  Just imagine: driving for about 50 hours non-stop at 60 mph and all you see is plastic garbage.  If all this stuff is “recyclable” why is it that they keep on producing more and more?  At this point, they should have been than enough to go around.  So when they say, “It’s recyclable,” don’t be fooled, because the false assumption is that it will be recycled.  What they’re really saying is simply: “It’s profitable.”

What to do?  Write the companies of your favorite products today: fresh-squeezed OJ, eggs, milk, corn chips, whatever.   Tell them you’re going to stop using their product until they start packaging it with non-invasive products that don’t endanger our planet and natural food chain.  The good thing is, these days you can find your product with more environmentally friendly packaging.  It’s not really that hard.  Go for it.  If enough of us write, maybe they’ll listen. May I also ask, would you please keep a garbage bag in your car?  Preferably paper.

Author Gerald Elias lives and performs in Utah. Each summer he returns to the Berkshires to play in the string section at Tanglewood. He is also a successful mystery writer.