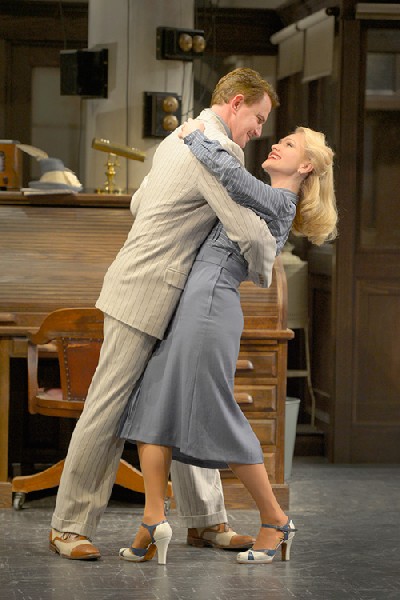 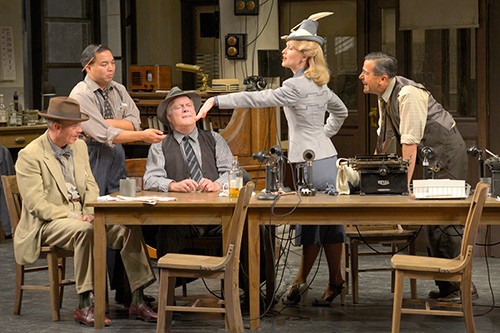 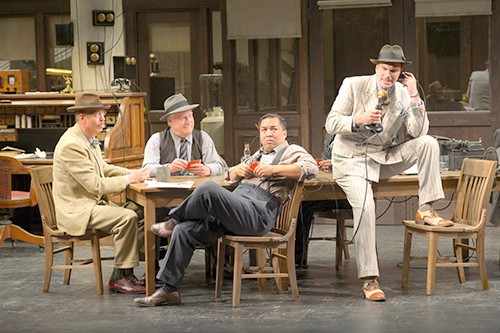 The art form known as adaptation can be tricky to pull off and still remain true to the dramatic intentions of the original author(s).  However, that is precisely the goal of the La Jolla Playhouse’s current west coast premiere of “His Girl Friday” (based on the Howard Hawks movie of the same name), directed by talented playhouse artistic director Christopher Ashley.

The “new play”, is a combination of the iconic Ben Hecht and Charles MacArthur comedy/spoof of the newspaper game during the 1930’s, called “The Front Page”.  It’s also faithful to Hawks’ 1940 screwball movie script.   Only this time the credited author of the play is John Guare, an egghead journeyman playwright best known for his plays: the absurdist comedy “The House of Blue Leaves” and the intriguing “Six Degrees of Separation”.  Guare’s version of “His Girl Friday” is currently under audience scrutiny on the stage of the famed playhouse’s Mandell Weiss Forum.

The original story by Hecht and MacArthur was a pointed study in the shenanigans committed by news reporters, predatory journalists, scoundrels, and scalawags, all in search of a “scoop” during the good old days when newspaper ink coursed through the veins of anyone with a by-line   It was a time when America’s newspapers and their editors would do almost anything to beat the competition.   In Chicago and elsewhere the politicians and the law were low hanging fruit when it came to scandal, bribery and collusion, and were easy pickin’s for sharp eyed and nosey newspaper professionals.

In Guare’s updated adaptation, the action is still set in a Chicago Press Room inside the Courts Building, but now it’s 1939.  In an effort to inject some “freshness and updating” he inserts some agit-prop elements into the script. References and dialogue about Hitler’s death camps and anti-Semitism by the reporter/characters jolt the audience out of their comfort zones, which I imagine was his intention, however, the dialogue has a tendency to alienate the mainly senior citizen audience.  It’s too early to tell whether Guare’s tinkering version of a comedy masterpiece will have any legs with audiences.

One thing for sure that we do know is, the cast in this production does a terrific job in taking the audience back to those wonderful years when manic dialogue was delivered at warp speed, with annunciation and clarity.

The story, in short, deals with hard-boiled and ethically-challenged newspaper editor Walter Burns (Douglas Sills) who learns his ex-wife and former star reporter, Hildy Johnson (Jenn Lyon), is about to marry bland and dull insurance man Bruce Baldwin (Donald Sage Mackay) and settle down to a quiet life as a wife and mother in Albany, New York.  Walter determines to sabotage these plans, enticing the reluctant Hildy to cover one last story, the upcoming execution of convicted murderer Earl Williams, nebbishly played by (Patrick Kerr).

Walter does everything he can to keep Hildy from leaving, including setting Bruce up so he gets arrested over and over again on trumped-up charges.  He even kidnaps Hildy’s mother-in-law-to-be (Mary Beth Peil).  When Earl Williams escapes from bumbling Sheriff (William Hill) and practically falls into Hildy’s lap the lure of a big scoop proves too much for her.  She is so consumed with writing the story that she hardly notices that Bruce realizes his cause for marriage to Hildy is hopeless and returns to Albany.

In between all the scheming that is going on, we get to meet the denizen’s of Chicago’s notorious newspaper community, a few minor functionaries, and a cast that knows their way around a comedy spoof when they find themselves in one.  The pacing by the very creative Chris Ashley has “His Girl Friday” zipping along, and he has his cast racing around on stage like a runaway train to the delight of the audience.  But the first act could stand a little trimming even with this fast-talking cast it ran 1hour, 15 minutes.  The second act was little better coming down about an hour later.

Sills, as Burns along with Lyon, as Hildy have nice on-stage chemistry as ex-husband and wife, who still can’t quite sever those old ties and memories, regardless of how many promises they make to one another.  Newspaper ink runs deep and devious.  Sills is a likable cad who has mastered the frenetic wheeling and dealing required to stay at the top of his Editor game.  Lyon is undaunted by the fast-talking Burns and she gives him a run for his money as a female reporter in a man’s world – and one who has earned the respect of her peers.  They are a delight to watch

There are quite a few scene-stealers in this production:  Bethany Anne Lind as Mollie Malloy, is one, another is Mary Beth Peil as Mrs. Baldwin, and the venerable San Diego favorite Jonathan McMurtry, as the Reverend, is another.  Actors working with McMurtry had better be on their toes whenever they’re in a scene with him. Nothing shines like talent, timing, and experience.  The biggest scene-stealer of all, however, is the impressive picture-perfect set design of Robert Brill.  It’s so creatively spot-on I felt I was back in my old home town of Chicago walking the halls of the Chicago Tribune and the Sun Times.  The lighting design by David Lander adds to the cluttered Press Room atmosphere, and the costumes by Paul Tazewell have the proper look of Chicago reporters, 1930’s Cops, and assorted working people thanks to the many clever touches by the entire creative team.

“His Girl Friday” performs at the Mandell Weiss Forum at the famed La Jolla Playhouse, through June 30th.