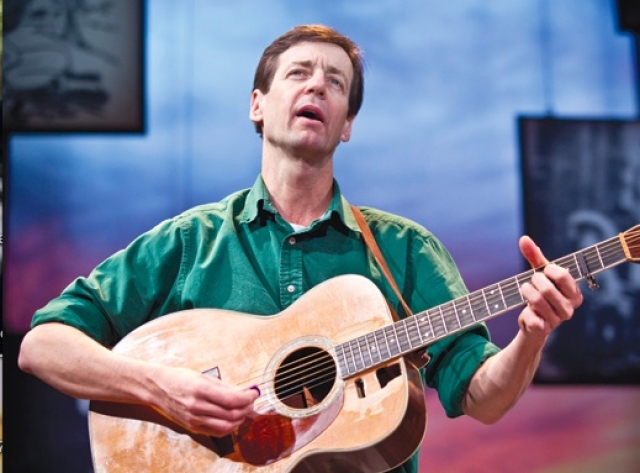 David Lutken in a brilliant creation of Woody Guthrie 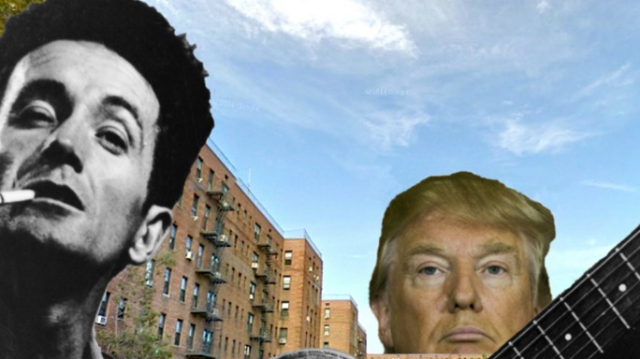 Guthrie lived in a Trump building in Coney Island

Woody Guthrie was many things: a folk singer, artist, and rabble rouser. Above all he was a poet and from the first moments on stage in David Lutken’s poignant portrait of the man in music, we hear this. Describing the town in which he was born, Woody says, "Okemah was one of the singingest, square dancingest, drinkingest, yellingest, preachingest, walkingest, talkingest, laughingest, cryingest, shootingest, fist fightingest, bleedingest, gamblingest, gun, club and razor carryingest of our ranch towns and farm towns, because it blossomed out into one of our first Oil Boom Towns."

Woody Guthrie was the bestest and David Lutken is the perfect singing actor to bring him back to us at the time when we need to hear his words.

Guthrie liked to take old songs and put new words to them. I Ain’t Got no home in this world any more, I’m just a ramblin’ man was based on a hymn.

Oh you can’t scare me I’m sticking to the union warms up the audience for a hootenannie that will follow the show. Of course as the show progresses more and more of the audience is singing. Immersive theater surrounds you. In participatory theater you are in the midst of the action.

Co-devisor and singing actor Helen Jean Russell can stand tall strumming on her double bass. She is also a tender mother, always singing to her son Woody. She disappeared into song and then an insane asylum where she died of Huntington’s chorea, a genetic disease which is lodged on one chromosome. Children of a bearer of the gene have a 50 percent chance of inheriting the disease. Woody got the gene. What Lutken makes clear is that Woody sees himself as his mother’s heir in so many other ways that the curse of Huntington’s seems hardly her fault.

Andy Teirstein is also credited as a co-devisor and stands out in Jackhammer John and Vigilante Man.

Megan Loomis is a lover, collaborator and lusty cowgirl, singing out in multiple roles.

The set has two large paintings at the back of the stage. One is of a railroad crossing and a town. The other of endless railroad tracks. The colors are golden brown and burnt sienna against a dark sky. Pictures of Woody hang around the set. The Spanish Civil War is not mentioned in the piece, but a sign refers to it.

As a matter of fact, a gingerly dance around Woody’s politics merges communism, socialism and Woodyism. He was black listed for a time.

I suppose Old Man Trump knows
Just how much Racial Hate
he stirred up
In the bloodpot of human hearts
When he drawed That color line
Here at his Eighteen hundred family project ...

Our current situation hovers over the show. It strongly reminds us that we are all in this together, so easily forgotten today.  The Irish Repertory Theatre is miraculously consistent in putting on first-rate productions.  Not only does Woody Sez follow suit.  It hits home in its music, its message and in performance.