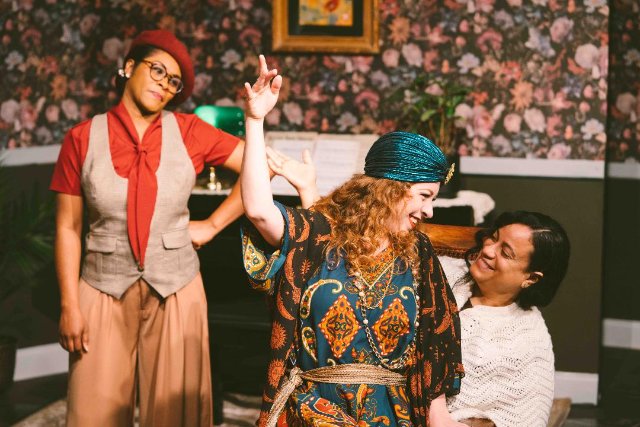 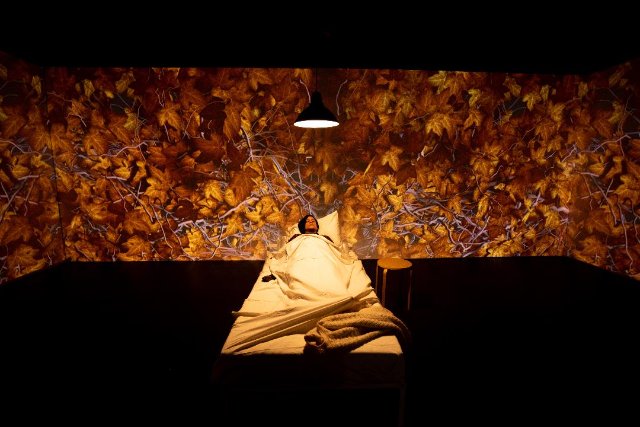 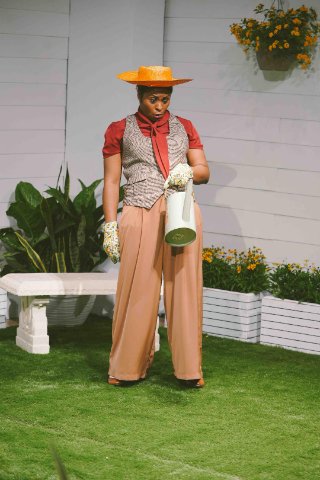 Photo by Isabelle Wittebort Fefu appears out in her yard during one of the play's many comical moments.

“There’s nothing wrong with being scared. It makes you stronger,” opines the title character in the rarely-staged Fefu & Her Friends. It is Maria Irene Fornes’s moving and strange, mysterious, groundbreaking classic play.

If that’s the case, you’ll be in the right place by watching the professional, nonprofit Thinking Cap Theatre’s (TCT) believable and playful production of Fornes’s immersive piece. Another opportunity to see this meaningful play might not come around for quite a while. TCT’s production runs through June 19. The venue, Dania Beach’s MAD Arts space, is the company’s new home.

Indeed, exposing yourself to things that scare you can make you less frightened of them over the long haul. And it’s safe to say that guns scare many of us when mass shootings are happening with frightening regularity in the United States. So, prepare yourself to face your fear by being in the same room with a supposedly unloaded rifle. It is one of the props in Fefu & Her Friends.

In reality, the titular character uses the weapon as a kind of toy. Specifically, she regularly shoots blanks at her husband, who falls down and pretends that his wife just killed him. Actually, it’s kind of a game between the couple.

Such seemingly nonsensical events often take place in absurdist plays such as Fefu & Her Friends. By the way, absurdism is a belief that human existence is chaotic and meaningless. Further, “Theater of the Absurd” refers to a style of theater that represents the absurdity of human existence in a meaningless universe. Plays written in that style include Samuel Beckett’s masterpiece, Waiting for Godot. In fact, Beckett (1906-1989) and his classic play strongly influenced the late, prolific, influential Fornes (1930-2018) and her writing style.

During a time when shootings, sickness, climate change, nuclear threats, and divisiveness are afflicting the world, some may feel that our existence is, indeed, chaotic and perhaps meaningless. So, Fefu & Her Friends is timely, but not only for that reason. The play also touches on themes and topics such as insanity, feminism, gender roles, and love between women. All carry relevance to today.

The multi award-winning play, set in New England during the Spring of 1935, is mostly plotless. Also, the piece is unconventional and groundbreaking in its structure and setup. Specifically, the first part has one scene, the second has four scenes, while the third has one scene. Scenes from the second part play out simultaneously in different rooms. Audiences see the first scene in part one and last scene in part three together in Fefu’s living room. For part 2, the audience splits up and visits each of the other rooms in Fefu’s house until they have witnessed all of part two’s scenes.

Perhaps the second part’s format symbolizes the notion that, as far as society has come in securing women’s rights, there are steps we must still take to ensure full equality. The literal steps the audience takes to each room might symbolically stand for the steps we all must take to ensure full quality.

In the play, a group of female friends gather at a mutual friend’s home to plan and rehearse a skit for a fundraiser to benefit arts in education.

When they are not planning or rehearsing, they sit and read in silence. Or, they wile away the time by discussing, for instance, how one of them constantly thinks about people’s genitals. Or, one of them might make a casual, perhaps even frivolous remark about something she just read. That topic then builds into a seemingly pointless discussion. We also witness an extended water fight, due to each of the characters’ reluctance to wash the dishes. Such occurrences are consistent with the absurdist style.

But there are serious moments in the play that make it feel not like an absurdist piece, but an issues-driven drama. For instance, two of the characters are in a strained same-sex relationship. During the play, we sense the tension between them as they try to bridge their differences.

Meanwhile, before the play begins, another character mysteriously became paralyzed. Or, is she simply "crazy?" Whatever happened obviously affected her mental state. We witness her hallucinations and intense suffering. Perhaps, we wish we could do something to help.

The aforementioned character is Julia. To her credit, Angelina Lopez Catledge imbues her with credible anguish, making her emotional pain sound and look real. She does all this without resorting to self-pity.

One of the four scenes in part two takes place in Julia’s bedroom. There, she lies in bed with her eyes shut, obviously hallucinating or having a nightmare. Disturbing sounds pierce the air while a projection on each of the walls depicts what resembles leaves falling.

Under Bree-Anna Obst’s lighting and projection design, we sit nearby, ominously in the dark, on all sides of the bed. It is as though we are intruders eavesdropping on her, or characters in Julia’s nightmare/hallucination. The entire scene resembles one out of a horror film.

As Catledge deftly portrays her, Julia is a recognizable character to whom we can relate. Perhaps, through her, we recognize a family member suffering physically and/ or emotionally due to the pandemic.

If there is one character among the bunch you would want to care for Julia, it is Cindy. She is patient, understanding, and maintains a calm, reassuring demeanor. But that does not mean she is immune from experiencing something upsetting. As a matter of fact, during the play, Cindy relates a disturbing dream she had. It involved a young male doctor and secret police.

Andrea Terrasa plays Cindy. With her voice breaking, Terrasa's Cindy recalls the dream with a familiarity that suggests that she just experienced it. At other times, Terrasa lends Cindy a sense of calm and a patience that makes you want to befriend her.

While Cindy is generally mellow, Christina is nervous and easily upset. In particular, Fefu’s talk and actions disturb her.

Dina Lewis plays Christina with believable tension. However, Lewis does not sound authentically frightened by Fefu’s actions. In addition to her nerves, Christina prefers to conform and not stand out in a group. That makes her quite a contrast from the showy Emma.

Sara Grant looks and sounds like a natural performer as the endlessly playful, outgoing, and dramatic Emma. Whether she is jumping into Julia’s lap, participating in the water fight, or reciting a lengthy monologue from the skit the characters are rehearsing, you will rivet your eyes and ears on Grant. She gestures grandly, and her energy seems unlimited, a la the Energizer Bunny. Yet, Grant’s performance never feels unnatural or forced. She is giving a seemingly effortless tour-de-force performance.

One of the themes in Fefu & Her Friends is relationships between women. The play explores the many ways women relate to each other. For instance, Fefu and Emma are close friends and seem to have known each other for quite some time. Grant and Rita Cole, who plays Fefu, speak to each other with a comfort and excitement that brings to mind Legally Blonde’s sorority sisters.

Contrastingly, Cecilia and Paula are old lovers whose relationship has turned sour. There is palpable tension between Cecilia (Jinon Deeb) and Paula (Jessica Farr). Also, clearly, Cecilia is the more aggressive, dominant person. While Paula is less so, Farr lends her a strength that suggests that Paula will not let her ex-lover push her around.

Certainly, Fefu is no pushover either. And Cole imbues her with a commanding, confident aura. In addition, she makes Fefu playful and fun-loving, even boisterous. Also, Cole makes sure we sense Fefu’s vulnerability when the character notes something ails her. We never learn exactly what troubles her.

Is there any part that Cole cannot play? This multi award-winning South Florida performer is unrecognizable with each character into whose skin she steps. Recently, Cole shined as a modern outspoken, ambitious artist. And, in another play, Cole deftly portrayed a more quiet, hopeful, turn-of-the-century seamstress.

Cole portrays each of her characters with impressive nuance and naturalness. In particular, she knows which words and which parts of words to emphasize to achieve the desired effect. Also, Cole never overuses or underuses facial expressions. She uses just enough to punctuate her character’s words.

Kudos must also go out to the behind-the-scenes crew.

Alyiece Moretto-Watkins’s detailed set design suggests that Fefu lives in an upscale, tasteful country house, filled with period detail. Fefu & Her Friends is an example of immersive, site-specific theater. And so, the designs make us feel as though we are participants in the action, in the same space as the performers.

Bree-Anna Obst, TCT’s Managing Director, designed the lighting. It is realistic or surrealistic, depending on the type of scene we are watching. In the scene in Julia’s bedroom, the projection on the walls seems to depict leaves falling. It is not entirely clear what that is to represent. It is open to interpretation, as are other parts of the play.

Stodard and Obst co-designed the sound. Fortunately, they make it easy to understand the actors and create foreboding sounds when necessary.

It can be difficult to lump the play into a single genre. Parts of the piece are comical and absurd, while other moments are serious and touching. One might define the piece as a feminist play, although some of the dialogue suggests otherwise.

Even though the play takes place in the 1930’s, it speaks to today’s zeitgeist.

“I think about death all the time,” one of the characters says.

With death seemingly all around us these days, many of us might find ourselves thinking similar thoughts.

Thinking Cap Theatre’s production of Fefu & Her Friends continues through June 19 at the MAD Arts complex, 485 S. Federal Highway in Dania Beach. Ticket prices range from $35-$50. For show times and to buy tickets, go to https://www.eventbrite.com/e/fefu-her-friends-by-maria-irene-fornes-tickets-321243687517.