Plays at the Orpheum Theatre 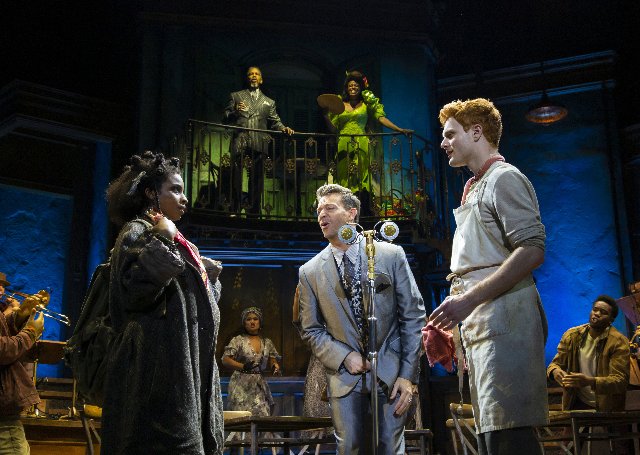 Certain classic stories have legs.  Orpheus and Euridice, one of the most famous stories from Greek mythology, is one that has been interpreted frequently into various forms of performing arts.  With themes that include fateful love, loss of faith, temptation, free will, and the cost of disobeying rules, it has broad appeal.

In the original myth, Euridice died from snakebite and was consigned to the underworld.  Under protection from the deities, Orpheus is allowed to retrieve her, but Hades issues the proviso that she walk behind him when departing and that he never look back.  Of course, he disobeys, and the price is that Euridice is returned to the underworld and that Orpheus will never see her again.  This theme of violating divine edicts recurs in literature, but at least in this case, the man takes responsibility.  Conversely, in the often misogynistic Bible women are assigned guilt.  Eve takes the rap for eating the forbidden fruit and causing the first couple to be evicted from Eden, and Lot’s wife (not even granted a name) is turned into a pillar of salt for defying the stricture against looking back at Sodom and Gomorrah as the cities burned.

From this play’s outset, it is clear that “Hadestown” will have a distinctive style.  Although the musical’s auteur, Anaïs Mitchell, comes from the folk world, she developed a unique musical amalgam for the show with elements from blues, jazz, and pop in addition to folk.  Her orchestration is as unexpected as it is brilliant in providing a magnificent background sound.  A seven-piece orchestra is dominated by strings with only one wind-blown instrument, though it adds surprisingly colorful accents throughout the score.  While the music is compelling, the lyrics are even better – penetrating and revealing with great clarity.  The storyline and overall production are equally captivating, making for a standing applause theatrical experience.

When charismatic Levi Kreis, as the narrator Hermes, takes the stage at “curtain call,” he hushes the audience. The silence at that time and in other pauses during the performance is remarkable.  Then the blast begins, quite literally.  Audrey Ochoa’s powerful, slurred, bluesy trombone leads Hermes’ rhythmic railroad song “Road to Hell” that foretells the fateful path that the protagonists will take.  Those hot licks set the groove for the entire performance.  The opening is followed by Euridice and The Fates “Any Way the Wind Blows,” about the disappearance of spring and fall, which is making life on earth hellish - a clear comment on climate change unique to this adaptation of the myth.

In the central love story Orpheus loves Euridice.  He is poor and downtrodden, yet optimistic.  As a fine musician, he claims that the song which he is working on will bring back the spring and win Euridice’s heart.  Nicholas Barasch portrays Orpheus, whose singing is distinguished by repeated shifts between a powerful countertenorish falsetto and a common tenor-baritone chest voice.  He carries off this pyrotechnic challenge with seeming ease.

Euridice is lured instead to Hadestown by Hades’ false promises in the stunningly contrasted duet “Hey Little Songbird.”  Kevyn Morrow is Hades, and he induces Euridice by dismissing her life as it is.  He does so in a jaw-dropping basso profundo that retains sonority in a range that is about as low as a human being can go, while conveying his character’s unrelenting menace.  Meanwhile, Morgan Siobhan Green is Euridice, and she sings with plaintive beauty as she is ready to give in, feeling that Orpheus, whom she has come to love, has failed her in her time of need.

The final principal is Persephone. Hades enticed her to become his partner because of his great love and willingness to make concessions to her.  Kimberly Marable sings Persephone’s signature “Lady of the Underground” with great power as she reveals that she can control the seasons.  Yet, she is a complex figure who will induce Hades to free Euridice from Hadestown.

The single set has a somewhat-worn New Orleans nightclub look with wrought-iron balcony lace and plantation shutters above, plus elevated platforms on either side of the stage for the split seven-piece orchestra.  Since the action takes place in other venues, the show might seem semi-staged.  And since most of the principles are attired in dressy clothes, it may even look like a concert version.  But the effective use of high-contrast lighting and darkness; movement; and other costumery stimulate the viewer’s imagination to fill in the blanks.  One example of a symbolic look is the depiction of dreary underground laborers in dirty work clothes, trudging on a rotating stage lit only by miners’ head lights and a few dim swinging lamps.

It seems that many theatrical works these days can be seen through a political lens, and particularly as a comment on Trumpism, whether that was the intent of the respective playwright or not.  There is no obliqueness in “Hadestown.”  Act 1 closes with “Why We Build the Wall” which could not be a more explicit indictment of Trump’s border wall efforts.  The lyrics given to Hades are especially damning: “The enemy is poverty; And the wall keeps out the enemy; And we build the wall to keep us free.”  In Act 2, Orpheus and Hermes’ “If It’s True” condemns the institutionalized lying by Trumpians (“And it isn't for the few; To tell the many what is true”) and the cheating that benefits the rich against the poor (“ 'Cause the ones who tell the lies; Are the solemnest to swear; And the ones who load the dice; Always say the toss is fair”).

“Hadestown,” with music, lyrics, and book by Anaïs Mitchell; developed with and directed by Rachel Chavkin; is produced by Broadway SF; and plays at the Orpheum Theatre; 1192 Market Street; San Francisco, CA through July 3, 2022.