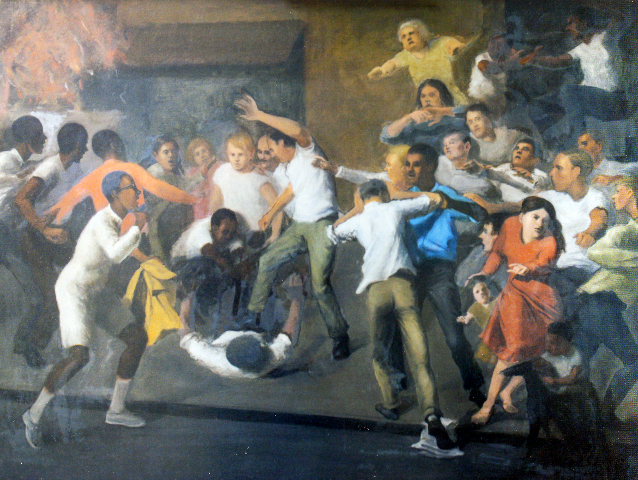 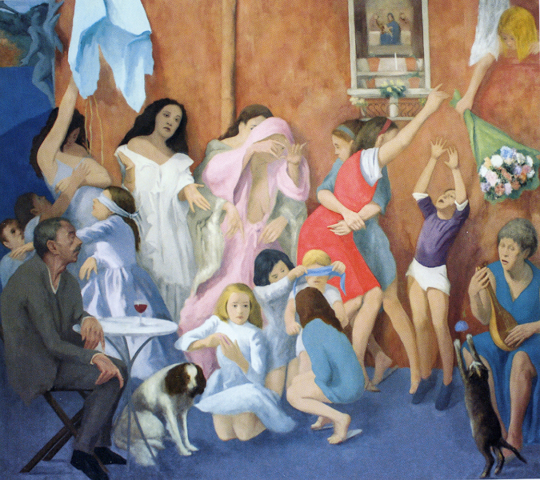 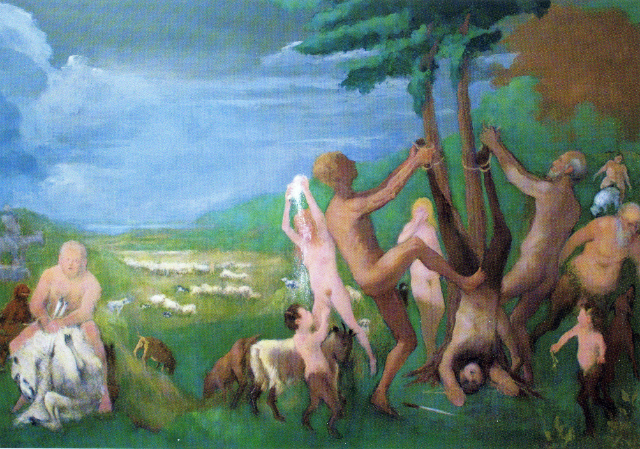 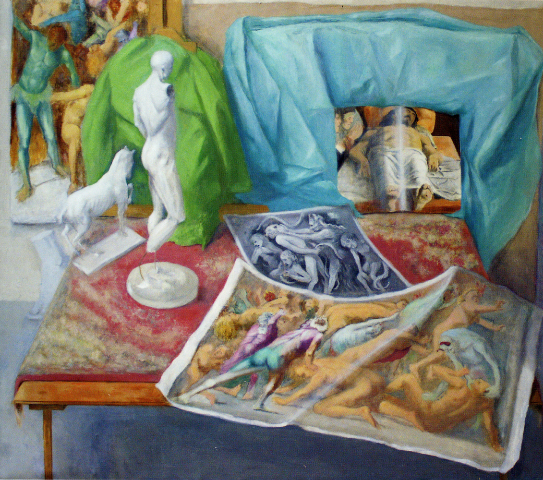 A passion for the Italian Renaissance informs the approach of the artist John Leavey.

The Berkshire resident who lives and works in Pownal, Vermont is exhibiting a selection of work spanning 1963 to 2016 at Prince Street Gallery.

Now retired for a time while living in New York he was employed as a set painter for film and stage.

During a long stretch as a fellow of the American Academy in Rome he and Norma came to know the works of the Italian masters.

In the manner of Social Realism the concerned artist created “Race Riot” in 1963. Now decades later the powerful image is still timely as police killings of black suspects are all too frequent with consequent urban turmoil.

While the subject matter was extracted from the news of the time the composition has an enduring clarity and balance. This is an instance of an artist applying the intensive mastery of his craft to explicating issues of social justice.

This conflates with the initial intent of the church to commission artists to put gospels on the walls for the instruction of the largely illiterate parishioners. Literacy did not become the norm in Europe until the books of Guttenberg and the preaching of Martin Luther that all one needed to reach heaven was faith and reading scriptures.

In defiance of the reformation of Luther the Roman Catholic Church discouraged the faithful from reading preferring to dispense the gospels through daily readings and preaching by priests during mass. Particularly during the Counter Reformation the Catholic Church commissioned ever more violent images of the deaths of martyrs.

That notion of art for edification and change is richly conveyed in the survey of works by Leavy which are lyrical with a critical edge.

He evokes the late work of Titian in a gruesome but oddly pastoral telling of the legend “Marsyas Tied.” It is a large, recent painting from 2014-15. The satyr Marsyas, a master of the shepherd’s flute, challenged the god Apollo who played the harp, to a musical contest.

The scales there tipped, however, as the contest was judged by the gods. As punishment Marsyas was strung up and flayed alive.

One wonders why Leavy, a mild mannered cultured gentleman, is attracted to such graphic subject matter. In this version two nude males are having at it with the doomed satyr. For leverage one has his foot planted in the groin of his victim while tugging on his hoof. During this sequence the knife has fallen to the ground. Junior satyrs and the drunken Silenus are onlookers to the presumed enjoyable sport.

The point of this is not to mess with the gods.

“Roman Painting” a large work from 1974 is more daunting to comprehend. To the left a peasant looking man is seated at a café table enjoying a glass of red wine. A dog rests at his feet. Nearby girls are playing what appears to be bind man’s bluff. This accounts for some turmoil among several women in the center of the composition. To the right a seated woman strums a mandolin while next to her a cat leaps for a ball. Above this scene is a votary shrine such as one encounters in the street. A boy in shorts is reaching up to grasp a bouquet of flowers being handed to him by a blonde girl in a window.

With the artist’s trope of a picture within a picture the recent “Quattrocento Still Life”  has a mix of elements including books opened to display Andrea Mantegna’s “Dead Christ” and what strikes me as a detail for Luca Signorelli’s “Last Judgement.”The other work may be by Raphael.

We much appreciated this opportunity to see works by Leavey. It is always an insightful pleasure to know more about the rich and diverse oeuvre of this artist.