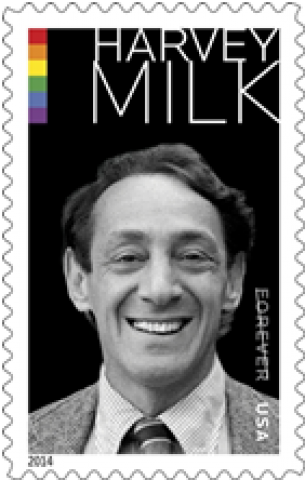 Harvey Milk on a Forever US Postage Stamp, 2014 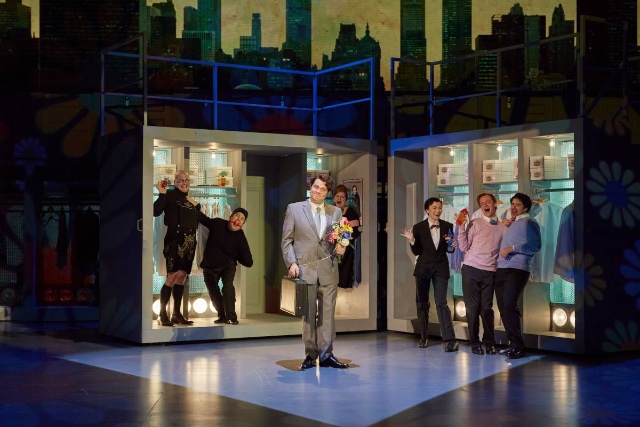 Thomas Glass, bouquet in hand, sings Harvey in his Opera Theatre of St. Louis Debut. His stunning baritone is full of passion, humor and humility. 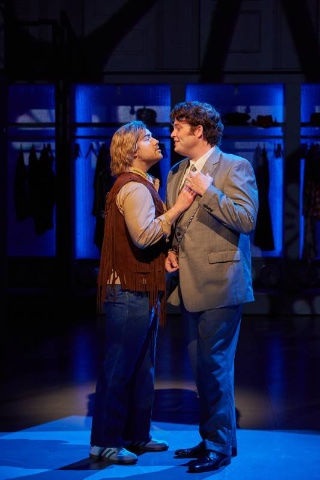 Glass and Jonathan Johnson as Scott Smith, a moving tenor as Mik's 40th birthday present, a pick up in the New York city subway. Nathan Stark, a commanding bass-baritone. Here he is a Teamster,endorsing Milk after Milk has gotten the gay community to picket Coors beer, a union-busting company. Stark also sings Mayor Moscone with authority. 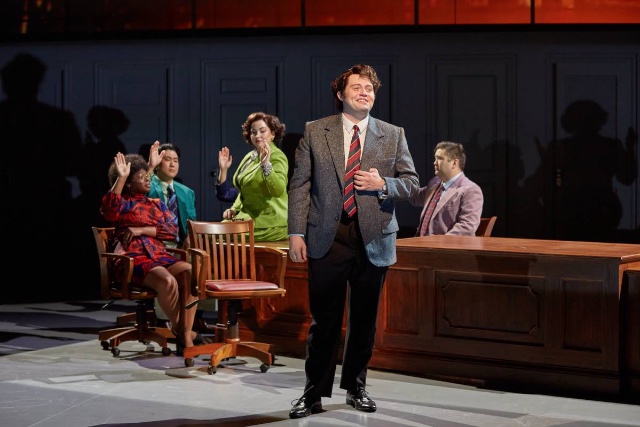 The Supervisors at work. Eliabeth Sarian, charming and melodic as Diane Feinstein in lime green, casts a vote with Harvey. 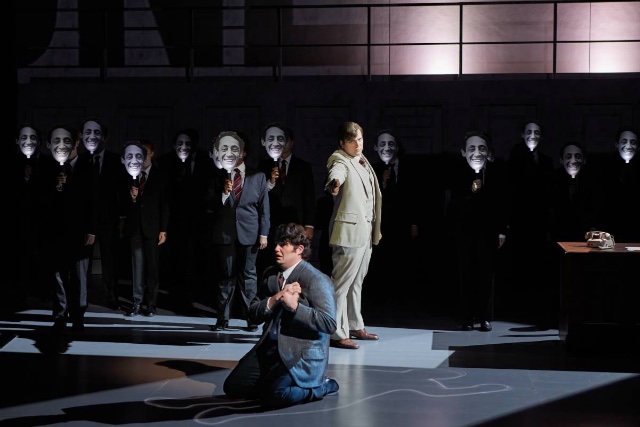 Tenor Alex Shrader catches the complex feelings of Dan White as he struggles to keep his Italian American heritage alive. 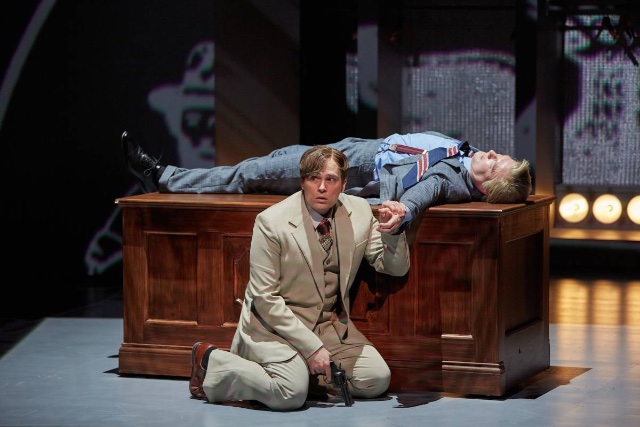 Milk's desk is his coffin. White will be convicted of manslaughter and do five years of jail time. On release, he killed himself.

Harvey Milk, the re-tooled opera, premieres at Opera Theatre of St. Lotus.  It is a smashing hit. Composer Stewart Wallace talks about again looking at the work, first draft created in 1994-5.  He now lives in Rome and is in St. Louis for event. He has always wanted to present the title character and his friends as human. This gives the audience a context which is neither campy nor exaggerated. Michael Korie has a first-rate journalist's eye and contributes apt and moving scenes to the drama.

Over-the-top and in-your-face incidents fit the story.  Milk’s Jewish background is referenced through the presence of his deceased mother. Milk’s decision to take action is impelled in part by memories of the failure of ordinary German citizens to stop the implementation of designs by Heinrich Himmler empowered by  Hitler.

Action is required to overcome cruel and lethal plans of one group against another.  As Harvey Milk was opening in St. Louis, the Patriot Front tried to riot against gays in Idaho. Thirty-one men arrested in Idaho planned to violently disrupt an LGBTQ Pride parade in the city of Coeur d'Alene. Police were tipped off by a citizen who reported seeing the men jumping into the truck, carrying shields, and looking "like a little army."

In the 1960s a public park in Boise, twenty middle-aged “white collar” men were convicted for homosexual activities with nearly 100 minors.The boys had sold sexual favors to the older men for money that was used to fix up cars.

The Idaho Statesman published this statement.  “Homosexuals must be sought out before they do more damage to youth, either by investigation of their past records or by appeal to their unbalanced minds,” dismissing homosexuality as a treatable mental illness.

Much has changed today, thanks to the campaigns of Harvey Milk.  On Pride weekend in Denver, middle class couples bring their children to celebrate on the lawn in front of the State House. The governor of Colorado is gay.

James Robinson and Sean Curran are credited as co-directors.  Robinson is artistic director of the company.  He opened the Metropolitan Opera's season, re-visiting Fire Shut Up in My Bones which he had created with composer Terrence Blanchard.  He clearly is willing to share credit when it is due.  While we can’t determine who added the curlicue to Milk’s pinky as he voted on a gay rights bill, it is charming, the subtlest soupçon gesture to gay signaling.

Wallace is a self-taught composer.  This leaves him free to respond to the emotional content of a scene and create it in notes. The match of meaning and method draws the audience in.

All the singers are mic-ed. Wallace states that there is no reason not to do this.  Composer John Admas agrees.  When his work is produced, mic-ing is a sine qua non.  Adams asks “Why should singers worry about their voices being projected in a 4000 seat house?”   What if a singer is a superb actor, but has not fully developed their technique and has a smaller voice. The goal of an opera house is to sell tickets and fill seats. If the house is so big (or has poor enough acoustics) that the music cannot be clearly heard at the back of the room, then sound reinforcement may be necessary. Electronically-enhanced voices may appeal. Certainly they do in Harvey Milk.

Every detail of this production has been stunningly attended. The set gives us location outlines in a long but vertically narrow top image. The Chrysler building and the Empire State offer New York.  The Golden Gate is iconic San Francisco.

Location details image the New York subway system, the Ramble in Central Park and, in a tip of the hat to the attraction of opera to the gay community, the familiar chandeliers gifted to the Met Opera by the Austrian government. Closeted gays have always “come out’ at the opera.  Milk listens to opera when he is preparing to run for office in San Francisco.  Opera is for all larger-than-life personalities, gay and otherwise.

The mix of spoken word and music is launched with great taste. Duets and arias enhance.

Members of the St. Louis Symphony perform in the pit. One musician reported that the orchestra’s position under the stage means that musicians  can’t really hear themselves and are unable to see the singers. All the more credit goes to conductor Carolyn Kuan for making the orchestration so clear and shaped.

Harvey Milk is not a hero. Baritone Thomas Glass makes him an ordinary man: kind, funny, flawed, shrewd, idealistic, yearning for a better world. He shows what such an ordinary man can achieve. Milk was the right person in the right place at the right time, and he rose to the occasion.

Opera Theatre of St. Louis injects new energy into an art form that may not be dead, but needs to show its relevance to the world we live in. Robinson’s choice of subjects lives at the psychic center of our collective consciousness.

Harvey Milk is being presented in St. Louis though June 25th.  Tickets here.

Co-commissioned by Opera Parallèle and Opera Theatre of Saint Louis.