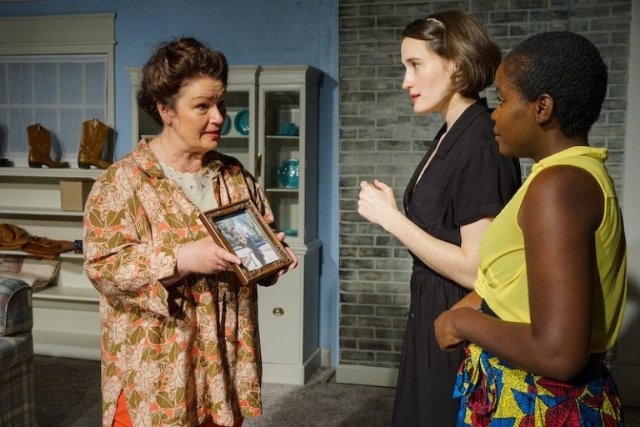 Sweet Texas Reckoning is a family story set up as a kitchen culture clash. It’s the story of a biracial, same-sex couple from New York vs. religious, bigoted Texans. The script by Traci Godfrey, who describes herself as a former closeted Texan, is now being staged by Artemisia Theatre with direction by Julie Proudfoot.

The storyline immediately sets us up for trouble when Ellie (Molly Lyons) prepares to welcome her daughter Kate (Scottie Caldwell) for a visit many years after she moved to New York. Ellie tells neighbor Alan John (John Wehrman) how she hopes Kate will come to her senses and marry him. Both of them operate under the assumption that Kate and A.J. were high school sweethearts and almost married years earlier. Ellie signals one of the play’s problem threads as she occasionally takes a slug from a bourbon bottle secreted in a cowboy boot.

When Kate arrives with her wife, Samantha (Anita Kavuu Ng’ang’a), it takes a while before the actual relationship is defined for mom Ellie, who reacts explosively and drunkenly. The situation doesn’t improve from there but somehow the play concludes with a comfortable ending. The running time of 105 minutes including an intermission doesn’t really allow time for these dramatic pieces of family news (and there are more) to bring about realistic transformations in the characters’ views of each other. That’s especially true in Ellie’s alcoholism and her feelings toward the couple she’s entertaining. It feels a bit like an extended soap opera.

All in all, it’s sort of like The Cake without the sugar.

The play won Artemisia’s 2016 Fall Festival of new play readings. Proudfoot has been working with Godfrey since then to refine the play for Artemisia, which is dedicated to new feminist plays that center on women who own their own narratives. She directs this capable cast smoothly with great timing and pacing, as well as believable Texas dialects by Lyons and Wehrman.

Scenic designer Ann Davis has created a down-home set built by Theatre at the Center Scene Shop, which also handles props. Lighting is by Beca Bartle. Blake Cardell’s sound design includes crickets (or cicadas?) to set the aural mood before opening and at intermission. Costumes are by Lily Walls.

Godfrey, a film actor (of the Grand Theft Auto films, “Law and Order Criminal Intent” and other television series),says she drew from personal experience for this play. Her other writing credits include screenplays for Spitting Image, The Pink Perfection and Hotter Than Georgia Asphalt. Sweet Texas Reckoning has won several other playwriting awards.

Sweet Texas Reckoning by Artemisia Theatre continues through June 30 in studio 3A at the Den Theatre, 1331 N. Milwaukee Ave. Tickets are $25 for performances Wednesday-Sunday.