A Different Approach to Annie 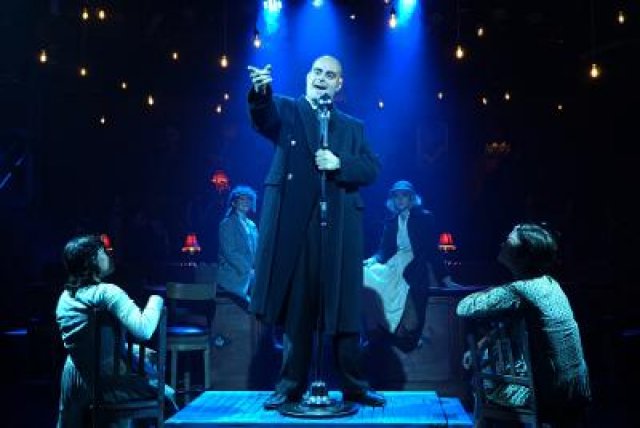 Photo by Giancarlo Rodaz The spotlight is on Oliver Warbucks (Frank Montoto) in Area Stage Company's production of Annie. 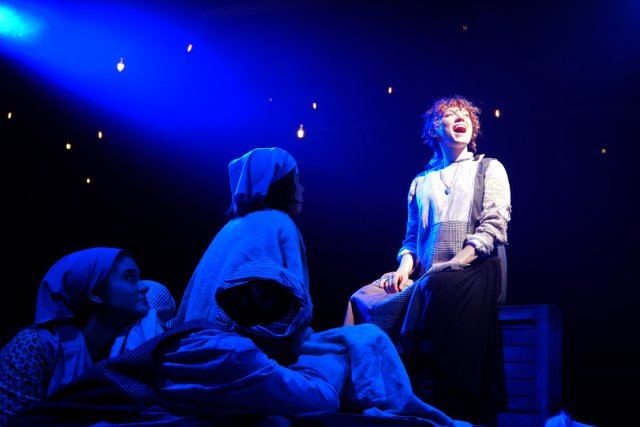 Photo by Giancarlo Rodaz. Annie's fellow orphans look up to her. 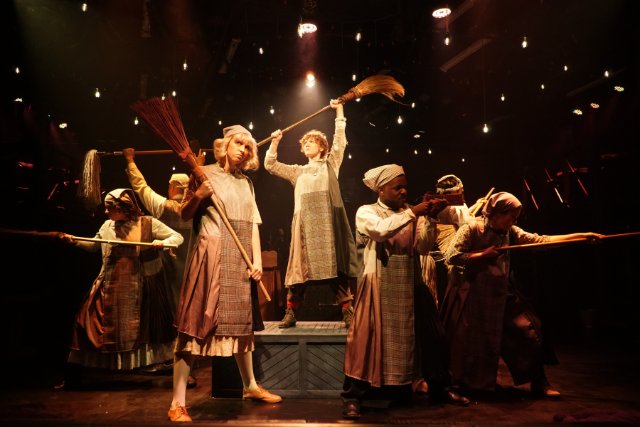 Photo by Giancarlo Rodaz It's the hard knock life for Annie and the other orphans.

Also, the ASC production, set in an early 1930’s New York City speakeasy called the “Soapbox,” and running through July 4, includes no children. Further, patrons sit in a “theatre in the round” configuration. In addition, in order to focus attention on the actors and action, as well as the show’s theme of remaining positive, even in the darkest of times (which certainly makes Annie timely) props and scenery are minimal in a style called “poor theatre.”

But ASC’s vibrant, credible production, which doesn’t change the story or ax any songs, is rich with emotion, pathos, humor, honesty, and heart.

Now, this is not meant to knock the Tony Award-winning original Broadway production in 1977. Among other things, it featured a real dog, child actors, and multiple scenic elements that conjured a seemingly real, vivid world. However, the original Broadway production also featured an aesthetic distance, the gap or “wall” between an audience’s conscious reality and the fictional reality onstage. No doubt, Annie’s “rags-to-riches” tale of a sunny, optimistic 11-year-old orphan and her sweet dog seeking a better life drew audiences into the characters’ world. Even so, perhaps the patrons didn’t feel as fully immersed as audiences of ASC’s production surely will.

In ASC’s visceral mounting, unlike a traditional one, your laughter is likely to last longer. Also, your reaction to the pathos is apt to produce more tears. And you’ll probably feel a closeness to the characters that you haven’t experienced during previously seen productions. That’s because in ASC’s version, you’re sitting smack-dab in the middle of the action and characters.

During any given moment, mere inches will separate you from the performers. You might be sitting at a cabaret-style table, when suddenly, a performer climbs atop that table. Or, you might be sitting immediately next to a box, which an actor will suddenly open to retrieve props. Within this intimate setting, your reactions will likely have a larger effect on the performers than it would in a traditional production.

In ASC’s showing, the musical begins even before the “curtain” rises (there is no curtain in this Brechtian-style production). Indeed, the show starts as soon as you begin walking through a narrow, dark hallway into a pretend speakeasy, a prohibition-era, elicit bar/nightclub. Inside, a jazz quartet is performing music from the era. Wait staff clad in period costumes and speaking in New York accents ask if you’d like refreshments.

“Give it up for Mr. Piano man!” one of the performers proclaims, amid the crowd’s chatter. At this point, you’re likely seated with the production’s program in your lap. But rather than a small magazine, it is a replica of a broadsheet newspaper from the 1930’s. The banner headline screams that you’re about to watch Annie the Musical. Another headline introduces the jazz quartet as “four Jazz gangsters still at large.”

The “speakeasy,” situated inside an appropriately-termed black box theater, is dark, with black walls. Amid this darkness, the titular character in Annie shines brighter. We more keenly sense her optimism, her spunk, cheerfulness, and re-assuring manner.

These are traits that actor Staci Stout believably convey. As the title character, Stout, a short, red-headed adult who in the show sounds like and could pass for a child, sports a high-wattage smile. Its brightness rivals the very sun that she optimistically and radiantly sings “will come out tomorrow.”

Stout boasts a strong, expressive voice. Through it, she not only sings well but effectively emotes (this is true for the entire cast, which a pleasant-sounding quartet of musicians back up without overpowering the singers). For instance, listen to how convincingly the performer’s voice breaks as, on the verge of crying, she sings “Maybe I’ll forget, how nice he was to me.” And watch how tightly billionaire Oliver Warbucks and Annie embrace for a length of time. It clearly demonstrates the close bond they’ve developed in such a short time and that he was meant to adopt her. Stout, and the other leads, also prove to be nimble.

Speaking of the billionaire, Frank Montoto looks and sounds young for the part. However, the performer seamlessly segues from a business-like formality when we first meet the character to a loving, sensitive, and joyful man. Montoto sings Warbucks’ solo, “Something Was Missing” in a heartfelt, tender manner. And his duet with Annie, “I don’t Need Anything But You,” radiates pure joy as the actors, holding hands, sing the number. Also, a sense of awe suffuses Warbucks’ solo, “NYC.” Warbucks sings the number sung while he’s with Annie and his secretary, Grace Farrell (a graceful, cheery Katie Duerr).

A grown woman normally portrays Miss Agatha “Aggie” Hannigan. However, in ASC’s production, a male actor in drag plays the reluctant orphanage operator, making the character funnier. Actor Imran Hylton plays her as an uptight, strict adult with a tendency toward melodrama. With his wide eyes and sharp voice, Hylton leaves no doubt that Miss Hannigan is in charge. Sure, he’s menacing in the role. But, Hylton also creates a humorous villain. Fortunately, Hylton avoids turning Miss Hannigan into a caricature, instead making her an “ordinary woman with feelings.”

Once again, Rodaz proves to be a creative, versatile theater artist. As he’s done in the past, the young man quadruples as director, lighting designer, set designer, and production photographer. His lighting creates focus, and Rodaz uses colors wisely. And Rodaz tones down the lights during darker scenes. Oddly, though, the lights do not change when Rooster and Lilly, disguised as Ralph and Shirley Mudge, show up to pick up their “daughter.” A darker lighting effect could work here.

As far as the scenic design is concerned, the set is basically the spacious “speakeasy.” Without scenic elements, it is easy to focus on the characters and the action. Tables allow performers to stand on them when, for instance, characters feel upbeat emotions, or they need the focus to be on them. Audience members are always integral to any live performance, but more so here. Since this production immerses audience members in the action, our reactions to the performers are more likely to further affect the actors’ performances.

The period-appropriate costumes define character, helping distinguish characters such as Oliver Warbucks and Grace Farrell from the orphans and Miss Hannigan.

Rodaz’ directs fluidly, with an attention to detail. And he allows the comedy to arise organically from the characters. At least once, Rodaz uses pauses wisely. Specifically, Stout, as the title character, pauses for what seems like almost a minute when she hears that her real parents died.

But in one scene, there’s no pause. It comes when a disappointed Annie reveals to Warbucks that she’d hoped he would accompany her to the movies. Warbucks answers immediately after Annie voices her disappointment. As a result, the response sounds rehearsed. Meanwhile, in another scene, Annie slaps a police officer. Wouldn’t she face a harsher consequence than a return to the orphanage?

Despite shortcomings, in the final analysis, this production is a triumph.

Yes, Giancarlo Rodaz has done it again. Audiences who frequent Area Stage’s productions know, for instance, how creative Rodaz became while directing a minimalist production of Shrek. This time, the award-winning, creative young theater artist has other surprises in store. One of them, which I won’t reveal here, involves the character of President Roosevelt.

Sometimes, less is, indeed, more. It seems to be one of the philosophies guiding Rodaz’s directing. And you can always expect a Rodaz-directed production to be fresh.  Theater “ages like milk,” he has said.

Rest-assured that the expiration date on this Annie is well into the future.