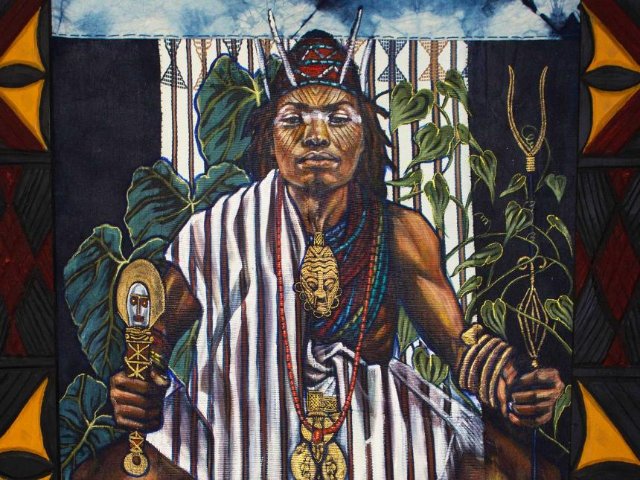 This summer, New Light: Encounters and Connections at the Museum of Fine Arts, Boston (MFA), brings more than 60 works of art from across the collection—including 23 newly acquired contemporary pieces—into thought-provoking dialogue. Organized into 21 “conversations,” the exhibition juxtaposes each contemporary work with one or two rarely seen objects acquired earlier in the Museum’s history. The latest additions to the collection include works by emerging as well as local or Boston-born artists, while the earlier objects range from an ancient Egyptian carving of a princess to 20th-century textiles from southwestern Nigeria and Gee’s Bend, Alabama. Together, these objects invite visitors to explore an array of subjects—from religious devotion and ancestral heritage to queer communities and Indigenous resistance—sparking unexpected connections and new narratives.

New Light: Encounters and Connections is on view from July 3, 2021 through February 6, 2022 in the Henry and Lois Foster Gallery and Charlotte F. and Irving W. Rabb Gallery. Access to the exhibition is included with general admission.

Generously supported by the Callaghan Family Fund for Contemporary Exhibitions. Additional support from the Barbara Jane Anderson Fund, The Bruce and Laura Monrad Fund for Exhibitions, and the Diane Krane Family and Jonathan and Gina Krane Family Fund.

Several of the contemporary works on view in the exhibition were acquired in 2020, as part of an MFA initiative to support living artists in Boston and nationwide during the COVID-19 pandemic. Among these new acquisitions is Joseph Lewis as Eze Nri (2018) by Stephen Hamilton (born 1988), a local artist and educator who learned traditional dyeing and weaving techniques from master weavers in Nigeria. In a meditation on ancestral heritage, the portrait—part of the series The Founders Project, which reimagines Boston Public Schools students as the legendary founders of the West and West-Central African ethnic groups—is displayed in the exhibition alongside a woman’s elejo wrapper cloth (1900–50) from Nigeria and a 1975 quilt pieced together from corduroy pillow covers by iconoclastic quilter Annie Mae Young (1928–2013) in Gee’s Bend, Alabama.

Like Hamilton, Lavaughan Jenkins (born 1976) and Eben Haines (born 1990) are Boston-based artists whose works have recently entered the MFA’s collection for the first time. Jenkins creates rich and expressive figural compositions by building up form and texture on a skeleton of wire and modeling paste and then applying successive layers of thick oil paint. New Light pairs his work I Want to Learn You (2019), which shares compositional parallels with Christian religious art, with a 15th-century altarpiece painting by Valencian artist Gonçal Peris: Virgin and Child Enthroned with Cardinal Alonso Borja. Haines’ Shelter in Place Gallery (2020) captures an artistic response to a moment of crisis—as cities around the world entered lockdown and art spaces, including the MFA, temporarily closed their doors during the pandemic, Haines dusted off a scale model of a contemporary gallery and made an open call over social media to local artists who wanted to display their work despite social distancing requirements. While Haines continues to stage exhibitions on Shelter in Place’s popular Instagram account, the original model makes its public debut in New Light, where it is paired with miniature acquisitions new and old: Tiny Cedar Pod Blue (2020), a wooden vessel by fellow Boston-based artist Alison Croney Moses (born 1983), and five experimentally glazed vases by 19th-century French art potter Auguste Delaherche.

Other notable new acquisitions include Fred Hampton’s Door 2 (1974) by Dana C. Chandler, Jr. (born 1941) and City of Quartz (Wicker Sun) (2020) by Tomashi Jackson (born 1980). Chandler’s work serves as a statement against U.S. law enforcement responsible for the killing of 21-year-old Black Panther Party leader Fred Hampton on December 4, 1969, in Chicago. Bullet holes pierce the large sculpture, as they do the figure in Wounded Sgt. (Wounded Sergeant) (1970) by Benny Andrews, the painting it is paired with in the exhibition. Chandler’s piece, painted in vivid green and red—colors referencing the Pan-African flag—memorializes Hampton and associates his murder with the broader suppression of Black liberation movements around the globe. Jackson’s work is a highly personal one, in which she mines the context of her Los Angeles upbringing in the midst of the 1980s crack cocaine epidemic, layering images from her own family archive and marble dust collected from a quarry in Athens with a photograph by Eugene Richards that documents victims of the crisis and a portrait of Gary Webb, the journalist whose research unveiled that the Reagan administration helped to illegally finance the Nicaraguan Contra War with proceeds from drug sales. Jackson contrasts the U.S. government’s systemic exclusion of Black citizens from democratic participation with the ancient Athenian concept of obligatory civic participation. Her piece is paired with a contemporary photograph of a monumental, excavated marble block by William Wylie and a selection of family snapshots from the second half of the 20th century, which capture moments of personal significance.

A carved Egyptian fragment (1349–1336 B.C.E.), is among the historical works that have never been previously shown at the MFA. Acquired by the Museum in 1937, it likely depicts princess Merytaten, the eldest daughter of queen Nefertiti. The carving is juxtaposed with Triangle Pairs with Pharaoh Heads and Nefertiti Recesses (2018) by Brooklyn-based artist LaKela Brown (born 1982), which shares deep affinities with its ancient Egyptian counterpart: similar surface texture, sparse composition and the expression of pride in beauty and kinship.

While many of the works speak to each other across millennia, other groupings in the exhibition bring together contemporary objects that illuminate different perspectives on the same topic. For example, the juxtaposition of a painting by Jaune Quick-to-See Smith (born 1940), a member of the Confederated Salish and Kootenai Tribes, with two photographs by John Willis, a non-Native photographer, focuses on Indigenous resistance over time and place. Quick-to-See Smith’s Tribal Map (2000) is rooted in a common symbol of the map of the contiguous United States made tribal: all non-Native names are removed and those of Native tribes and nations are layered on their traditional and current homelands. Willis’ photographs are from a series he made in the fall and winter of 2016, documenting the peaceful Indigenous-led demonstrations protesting the building of the Dakota Access Pipeline. The groundswell of support that Willis documented—an effort that brought together thousands of people from all walks of life and more than 300 Native nations—reinforces Quick-to-See Smith’s assertion of the U.S. as tribal land.