Composer Péter Eötvös Creates a Work for the Ages 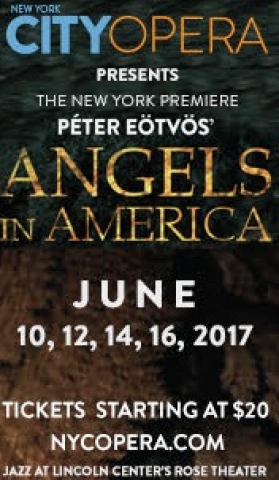 Angels in America as Opera 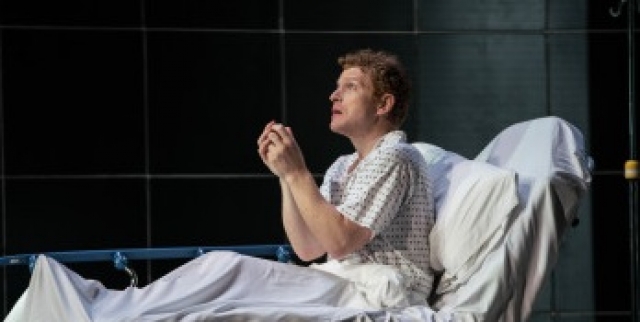 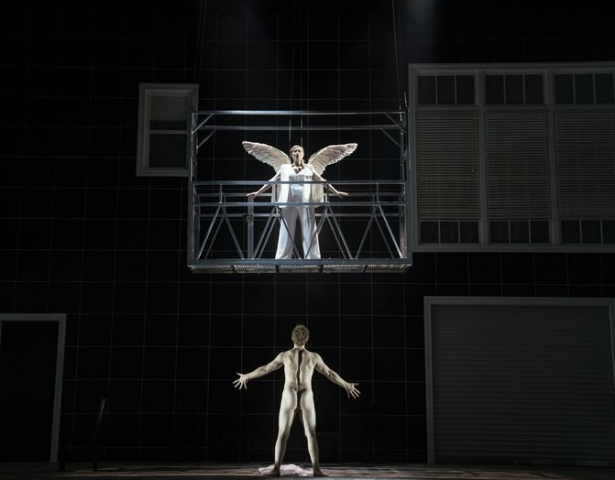 Angel Kirsten Chambers appears to Prior

Composer Péter Eötvös took a monumental American work, Angels in America, and abstracted its spirit as an opera for the ages. Hallucinatory and death-directed, the opera version mixes spoken and played note language to convey both the anguish and rage of the victims of AIDS. Making and opera in English is no small feat.

In defying the material order where parents die before their sons, a wonderful opera emerges.

Eötvös combines a cornucopia of word sounds and note sounds. A phrase that starts spoken, “You are the only person” morphs gently into song, “The only person that I love.” Spoken, “I fall into pieces” morphs into song with “It’s like a punishment.”

There are lines like “Nobody knows what causes it,” plunge lightly down a scale and are punctuated, after the conclusion, with a tuba bump.

When Roy Cohn is diagnosed with AIDS, he first repeats the word "AIDS” spoken, and there is a guitar pluck. “Your problem Henry…” and there is a sad slide down strings and another pluck. “Is that you believe in words and that they mean what they seem to mean.”

This rich sound landscape may well come from years spent in the outside-of-sound boxes of IRCAM (Institute for Research and Coordination in Acoustics/Music). The magic of sound becomes clear to composers who work there. The importance of overtones and the tones of language become unmistakable in this environment. Music created in and influenced by IRCAM deserves close attention. Attention is rewarded in Angels in America.

As the new New York City Opera gathers its troops, wonderful singers not heard often enough appear on stage. The singing was not only first-rate but apt across the board. Each singer deserves a call out. Wayne Tigges as the scumbag Roy Cohn, whose fluttering octopus fingers add a visual to his richly ranging voice. Kirsten Chambers has also been discovered at the Metropolitan Opera as a soprano for contemporary sound and superb dramatic talents. Her Angel is at the heart of the opera and sinks and soars. Sarah Beckham-Turner is winning in multiple roles.

At the center of the operatic take on Angels is Prior, dying of AIDS and wanting to live. Baritone Andrew Garland sings of the end-of-life.  Hallucinatory experience comes to Prior as he accepts the role of Prophet, assigned to him by the Angel.

The hallucinatory experience is crowned by Tigges as Cohn when Ethel Rosenberg, who he made “sing”, sings a Jewish lullaby to him. It is an exquisite moment. Opera can push a theme like hallucination, personal and social, to extremes. Eötvös has effectively done this.

Sitting at a  massive electronic soundboard in the middle of the theater, mixing and matching miked singers, the sound of the opera is eclectic and always written to match emotion and the thrust forward of the plot. Eötvös, who has composed nine operas mounted frequently in Europe, is unrestrained in his selection of sounds, including the English language. Instead of disrupting flow or confusing, when that is not intended, he creates a clear unity of feeling.

The set is appropriately abstract, but unfortunate in a locker room feel. One senses that lighting could have been more effectively used. Light is white, and the mixture of colors in the original Theatre de Chatelet production more effectively enhanced in the spirit of the story.

Tony Kushner was invited to participate, but preferred not to. Condensation was not his talent, he declared. He did like what Péter Eötvös and Mari Mezei created. "It's more a meditation on themes of the play rather than a full-blown recounting of the thing," says Kushner. "It's a kaleidoscopic experience rather than a straightforward narrative."

Although the end bracket of the opera falls a bit flat, the opening lingers long after the show ends,  Sarah Castle defines Rabbi Chemelwitz, intoning the cantor's service for the dead.

Michael Capasso, the director of the company, has announced that NYCO will mount one opera on an LGBT experience each June, which is dedicated to this group in New York City.