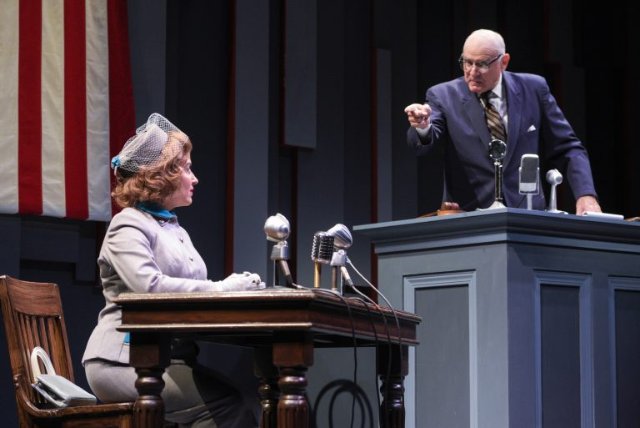 “Those who cannot remember the past are condemned to repeat it,” George Santayana.

Events that rivet one generation become vague historical observations to later generations. In the lifetimes of our current crop of senior citizens, Vietnam, Watergate, and the civil rights movement among other profound occurrences are seared in our memories, while to younger people their lessons are not always well understood.

Historically, the victory of evil over goodness has occurred when otherwise good people turn a blind eye to the perpetration of wicked behavior. Such was the case with the Holocaust. People are quick to forget and slow to grasp current parallels to tragic historical events. Now, we must ask ourselves whether our great democracy is being debilitated because responsible parties stand by while our constitution is ransacked by the highest authorities.

This is why stories like FINKS, which revisits the McCarthy Era (1947-56) must be told. Even when they don’t unearth new revelations, they need to be passed on to each succeeding generation. Few of us are old enough to remember that period first hand, but it is one of the numerous sad chapters of American history. Under the guise of the Red Scare, Senator Joseph McCarthy and the House Un-American Activities Committee (HUAC), abrogated the rights of thousands of people. Their practice of denouncing their political opposites is little different from the same strategy used by the current presidency. Like most smudges on America’s reputation, many self-proclaimed patriots tend to gloss over these matters, so as not to blemish our self-image as the exceptional society.

Perhaps the most targeted community by the era’s witchhunters was the entertainment industry, in order to purge it of “subversives.” The penetrating drama FINKS is the product of Joe Gilford, whose parents were victims of HUAC. They, among hundreds of artists were subpoenaed by HUAC, accused of participating in the communist movement. HUAC demanded that the accused name names of those who participated in “communism” in any way. Lives were wrecked. The accused faced a Gordian knot. Those who refused to cooperate, like Zero Mostel and Lee Grant, suffered blacklisting, meaning that they were unable to find movie or television work. The less fortunate like Dalton Trumbo and Herbert Biberman were imprisoned. The finks who snitched, like Elia Kazan and Budd Schulberg, would be forever vilified by many of their peers.

The play incisively renders the times, creating empathy for the characters and sending a chilling wind of reminder about the police statism that arose then and that threatens to arise presently. FINKS does take a while to develop its legs, and it takes the second act to redeem the first. Early scenes present a dramatological challenge, as Mickey Dobbs, who represents the playwright’s father, comedian Jack Gilford, performs stand up. But humor has changed so much in 70-ish years that a contemporary audience doesn’t find it very funny. This raises the question whether it is even necessary to include so many performance bits from the era, especially if they drag.

After the orientation period of the play, the pace quickens. The interest heightens as familiar real-life figures become involved; as the courtroom-like scenes presided by Representative Francis Walter evolve; and as the stakes for the players intensify. It is worth noting that most of the characters in the play were real people. But perhaps to allow more literary license, the three main characters are fictionalized – the playwright’s parents and their close associate, esteemed choreographer Jerome Robbins.

Quality performances abound, especially Donna Vivino who plays the vivacious, insistent organizer Natalie, the fictional stand-in for the playwright’s mother, and Jim Stanek, who plays the reluctant Mickey – left leaning but mostly, he just wants to work. Andrea Bechert’s staging is striking and effective. Owing to the width of the stage, four venues appear simultaneously, dominated by a courtroom-like committee room and a nightclub.  Director Giovanna Sardelli utilizes the space skillfully, especially in sequences that overlap space and time.

Disquieting scenes appear as finks name names before the committee and as the exposed suffer the consequences. But lighter moments occur as when Natalie is being interrogated by the committee chair. She ties him in knots by answering every question with a question, much in the manner of an Abbott and Costello skit. And by the way, they appear as well because Costello was on the list of suspected communists.

One of the frightening pities revealed in the play is the vicious depths to which HUAC would stoop in order to trap its quarry. Although a number of organizations that entertainment folks associated with were explicitly communist-related or inspired, suspects were marked by the committee for associating with groups that supported any progressive cause – civil rights, workers’ rights, and peace itself. Excepting treason, the First Amendment supports freedom of speech and assembly, and criminalization of association or proclamation of any political belief is blatantly unconstitutional. Such was this sad episode in American history that we belittled the Constitution and lost our way.