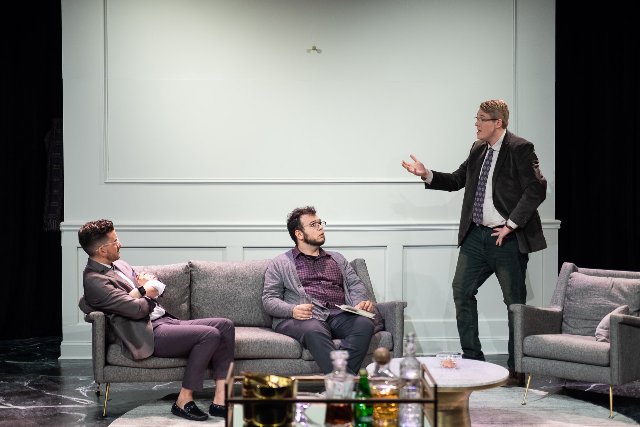 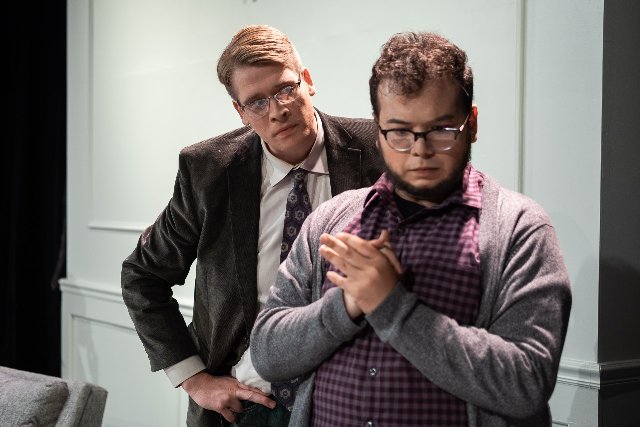 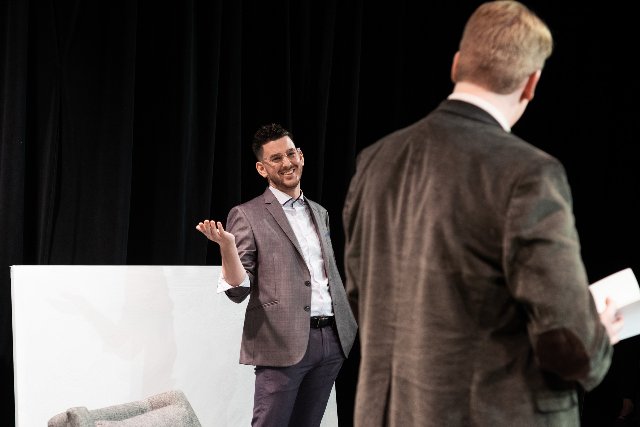 It’s funny how someone buying a white painting can nearly destroy long-lasting friendships.

New City Players’ production of this 90-minute play, about perception impacting relationships, runs with no intermission. It features a terrific cast of three who disappear into their roles. Short, pithy scenes and snappy dialogue hold our interest.

The performers’ intensity and sincere portrayals will impress. So, too, will their deft comic timing and hilarious expressions during pauses. And one long monologue will keep you riveted and in wonder; how did Joey De La Rua, as the nebbish Yvan, manage to say each word clearly and breath properly so he didn’t hyperventilate?

While there are three human actors, Art, which runs through July 1, features a fourth, non-human character. It’s the white painting.

Actually, the character that audience members might likely find the hardest with whom to side is Marc. His arrogance should cause you to gasp.

Meanwhile, Marc recoils when he learns that his friend, Serge, has bought a white painting for a fortune. It’s as though by doing so, Serge successfully placed a deadly spell on his friend.

Certainly, everyone has a right to his opinion. Furthermore, people’s backgrounds, prejudices, tastes and experiences color their reaction to a work of art.

In Marc’s case, his “old school” preference turns him off to the modernist white painting. However, his reaction seems arrogant and repulsive. He not only calls the painting “this shit” but suggests that Serge has no right to have bought it or like it.

But the author doesn’t assign blame solely to Marc. Insinuations and verbal attacks criss-cross the stage and even a physical assault occurs – all as a result of this white square.

Aren’t these guys friends, you might wonder, based on their conduct? But friendships aren’t “monochromatic” or as simple as the color white would suggest. Indeed, there are subtleties and nuances when it comes to human interaction and language.

Reza doesn’t confine her play to art and taste or impart a history/appreciation lesson. The best plays about art aren’t that limited in scope. Rather, the playwright uses visual art as a springboard to explore, for instance, the intricacies of human relationships and how one’s opinion about a topic can alter the course of a friendship.

Folks can change their opinions, allegiances and tastes over time. Reza shows us how those changes can affect other people.

Marc is such a person. He’s deeply affected by Serge’s association with a particular group of artsy people. Marc views his friend’s shift as a form of abandonment. And Marc lets us know in no uncertain terms how he feels.

“You’ve found a new family,” he tells Serge. “Your penchant for idolatry has unearthed new objects of worship.”

No doubt, Reza has previously turned the use of vivid, coarse language and bickering into a fine art. You don’t have to look further than her 2006 play God of Carnage.

As is the case in Carnage, there’s plenty of verbal pyrotechnics in Art.

In particular, we keenly feel the intensity of Timothy Mark Davis’ performance. The hulking actor turns Marc into something simmering, just waiting to explode. His facial expressions and voice drip with arrogance that make it hard to side with Marc. Then again, perhaps we’re not meant to. Yet, suppose underneath Marc’s belligerence and haughty manner, lies a vulnerability or insecurity. It doesn’t, however, quite come across through Davis’ portrayal.

Rather, such emotions are apparent through Joey De La Rua’s beautifully nuanced portrayal of the sensitive Yvan. All the poor guy wants is peace and a quiet evening out with friends.

After all, Yvan is buckling from the weight of his own issues. He’s about to get married while dealing with members of the wedding party, who are bickering like the boys on stage. In addition, he’s trying to keep peace between his friends. They fight for his allegiance and almost dehumanize him.

La Rua convincingly endows Yvan with a fidgety, apologetic demeanor. He’s like the chubby kid everyone picks on.

When the three-way friendship turns hostile, La Rua palpably turns his character into an emotional mess. He sounds like he’s authentically chocking back sobs and his voice is filled with palpable pain.

Sometimes, the actors communicate that hurt silently, such as when Davis lies back in a couch. He’s clearly exasperated; his mouth is open, as though he’s about to undergo a root canal.

Indeed, much of the production’s comedy comes during silence. A raised eyebrow or a strange facial expression while taking a ridiculously-close look at the white painting, as though it were an alien, is riotously funny.

By taking such a close look, Marc might as well come right out and say that Serge is an alien for liking and buying the painting.

But there’s nothing otherworldly about Ryan Maloney’s strong depiction of Serge, which matches Davis’ Marc in intensity. The difference is Maloney’s Serge is a more subdued, flamboyant and stylish.

Director Schulte’s smart staging includes positioning Davis and Malone in opposite corners. This reinforces their opposing stances and the tension between them. Meanwhile, Schulte, at appropriate times, sets La Rua’s Yvan apart from the other two. They’re ganging up on him, as though they’re a tag team.

Although the play, as written, takes place in France (Christopher Hampton translated it into English), Schulte has moved it to New York. It takes place in the different characters’ apartments, which look the same through the scenic design (by Maloney), except for different artworks on the wall. This suggests each character has a different taste.

The setting is simple yet elegant. A liquor tray and assistant stage manager Johnny Contini adds to the elegance, exiting and entering with formality, as though he were a butler. This adds color to the proceedings.

Meanwhile, the contrast between the white painting and the black background at this Black Box-style theater is symbolic. The nature of relationships, language and art are not black and white.

There are shadings, as Reza’s layered play skillfully reminds us.