Man in an Orange Shirt 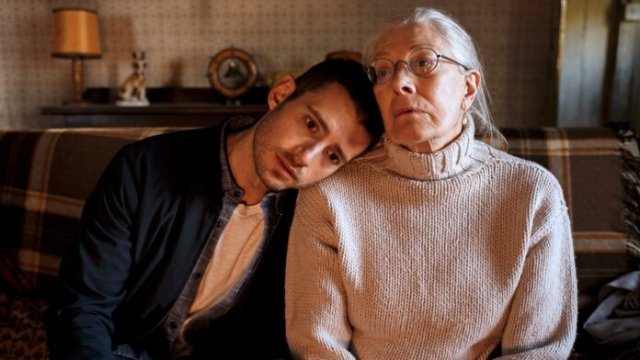 Our British cousins shared with us their language, customs and laws for 169 years before we subjects of the Crown and colonists too, decided that we preferred to govern ourselves; opting to be free and independent, going so far as to fight a war with ‘Mother England’ to make sure that the American experiment would become a reality.

Moving pictures may have been invented by the French, but the Brits and the Americans have turned the magic of the movie experience into a worldwide phenomenon. True, there are practitioners worldwide, but America and the United Kingdom (UK) are preeminent as creative visual artisans when it comes to the stage and/or the unlimited flexibility and range of the motion picture camera in creative hands.

The British film “Man in an Orange Shirt”, is one example of how a poignantly written romance drama, performed by gifted actors, all of whom have been deftly directed by their countryman Michael Samuelson, can take a small, intimate film dealing with the highly emotional and radio-active subject of homosexuality, then turn it into a compelling and relevant movie about England’s punitive English homosexuality laws that have existed for decades is worthy of one’s attention regardless of one’s sexual identity or preference.

The British government has been slow in coming to the party of legally joining the rest of Western society in realizing that all people have inalienable rights as human beings to live, love, and marry whomever they please.  The English “Gross Indecency” laws concerning males – like those that ensnared and ended the career of famed playwright and author Oscar Wilde at the end of the 19th century – were finally decriminalized and removed from the law statutes with Parliament’s passage of the Sexual Offenses Act of 1967.

In a sidebar digression it might be interesting to share some statistical clarity for context and perspective of the film written by novelist Patrick Gale; based in part on his novel and his family’s history.  The UK is a country of some 53 million people. According to 2018 government records, only 6% of the population identifies as LGBT.  In America a country with 328 million citizens, the LGBT community consists of only 4.5 % of individuals 16 years and older who so identify; according a May 5th Gallup Poll taken in 2018.  I believe it’s a safe bet to say that the gay population is not planning on taking over world.

The film “Man in an Orange Shirt”, was originally produced as a two-part British TV miniseries.  But for American audiences, the two interwoven stories of love relationships over a period of two generations, has been joined into a single film presentation that screened on PBS stations across the country. I reviewed it earlier this month.

The richly textured film features an intergenerational story that tells of the obstacles that Western society and England in particular is placing on love relationships of two veterans.  Captain Michael Berryman (Julian Morris) and Captain Thomas March (James McArdle) who briefly meet during the waning days WW II. Their attraction for one another however is immediate, passionate, and incendiary.  And it’s also against English law.  Men cannot have sex with another man., or marry another man.

Once back in civilian life Michael and Thomas have been meeting secretly, which places a huge strain on Michael’s marriage to young Flora played by Joanna Vanderham, (later to be played by Vanessa Redgrave).  From the day Flora discovers love letters from Michael to Thomas is the day Flora burns the letters signifying that their marriage has changed to that of a brother-sister like relationship.  Betrayal produces emotions that are difficult to control.  Beware the woman scorned…

The story thread then moves on to the trials and tribulations of 21st-century partnerships using the example of Captain Berryman’s grandson Adam (Oliver Jackson-Cohen) and architect Steve (David Gyasi). Their story also is filled with obstacles that also seem insurmountable.  Steve leaves his twenty-year relationship with his partner and art designer to begin anew with the younger Adam.

The film’s nexus point of the two stories are linked by Flora Berryman, (Vanessa Redgrave) as Michael’s grieving wife and Adam’s grandmother, whose unrequited love over the years for the long-deceased Michael, keeps her from confronting Adam with the truth about his grandfather. Flora finally expiates her secrets and betrayal by erupting into a hateful response to Adam’s news about his coming out and planning on spending his life with his architect companion Steve with the hope that love which has the redeeming power of forgiveness will win over his grandmother.

The real beauty of this engaging, powerful and achingly poignant film lies in the performances of its sublime ensemble cast. They’re experienced, talented, and spot-on in their portrayals, and all are in the thrall of the great 80-year-old (when she made the film) Vanessa Redgrave. The great ones never seem to lose that special gift of star quality.

“Man in an Orange Shirt”, should be on your “must-see” list so keep checking your local TV listings for dates and times of its screening.