At The Legacy Theatre 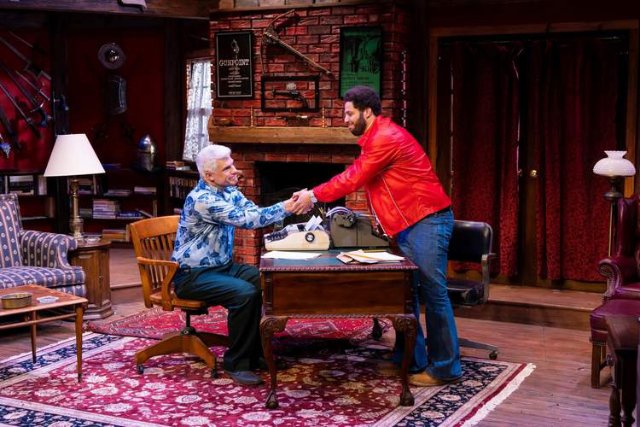 Thrillers – particularly on stage or film – should cause audiences to gasp at the unexpected turns of events. The Legacy Theatre production of Deathtrap did that on occasion, the night I saw it. It was only its second performance before an audience; I’m sure as the cast picks up the pace, more gasps (and some laughs) will be there.

Ira Levin (author of novels Rosemary’s Baby and A Kiss Before Dying) wrote this play that he billed as a comedy/thriller in 1978. It had a long Broadway run and was made into the 1982 film starring Michael Caine, Christopher Reeves and Dyan Cannon.

Sidney Bruhl writes thriller plays, but the last few have been flops; he is out of ideas and depending on his wife’s money to support their life in a secluded home in Westport. He announces to his wife that a young man who was in one of his recent workshops has sent him a top-notch thriller (called Deathtrap); he makes a joke that it is the type of sure-fire hit that he would kill for.

That sets in motion the plot – Sidney invites the young man, Clifford Anderson, to visit the house with the explanation that Sidney will offer him some tips. Myra, Sidney’s wife, sees it as an opportunity for Sidney to get co-credit (and royalties) for the Broadway hit.

I won’t tell you too much about what happens except to say that a Dutch psychic is involved (Helga ten Dorp) and that things aren’t always what they seem.

The set by Jamie Burnett is spectacular. It captures the rustic nature of a barn converted to a home, right down to the period-appropriate furniture. Burnett also handles the lighting design which is equally excellent.

Let’s be honest – this play would not work in today’s modern world of cell phones, computers, GPS devices and more. But that can also be said of many classic plays from Romeo & Juliet to most screwball comedies.

Like many thrillers, the success depends on the audience over-looking inconsistencies, particularly in character motivation and backstories. This is not the fault of the production but of the original play.

Legacy Theatre and director Mark Zeisler have assembled a good cast for this project. Philip Callen who plays Bruhl establishes the character’s desperation and deviousness. Honesty and truth-telling are not his strong points. You can easily see why both his wife and Clifford would be drawn to him. If I had a criticism, it is that Callen doesn’t convey his deviousness soon enough to justify his wife’s nervousness at his comment about “killing” for the play.

As Myra, Mariah Sage must try to develop a character that seems more like a plot device. Myra is both mousy and subservient as well as pushy and determined. It is a difficult combination that Sage only partly masters.

Bryce Smith as Clifford Anderson must combine cunning while also projecting naïveté.  If things aren’t what they seem, then Anderson is the most cunning of the characters; he is using everybody for his own purposes. Smith doesn’t project enough charm to convince us that the character is both ingratiating or charming.

As the psychic, Mary Ann Frank needs to maintain a Dutch accent; I’m not sure it was Dutch but it did come and go. Helga provides many of the laughs with her frenetic actions and flower child clothing. At times, the performance became a stereotype. You are meant to see that Sidney and Myra are somewhat afraid of her. This wasn’t always conveyed.