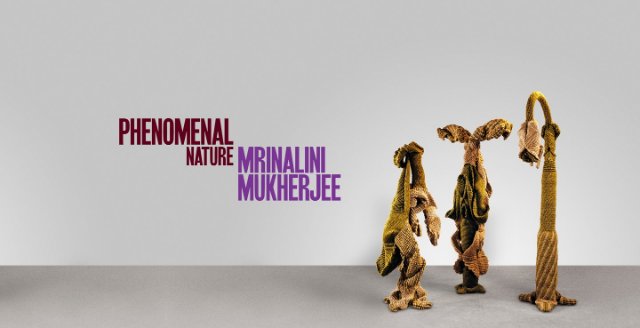 Phenomena Nature at the Met Breuer through September 26, 2019 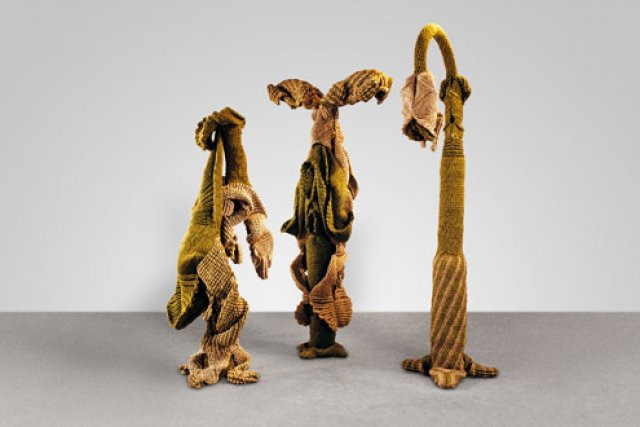 Phenomenal Nature, the first American retrospective of the remarkable sculptures of Indian artist, Mrinalini Mukherjee, will be on display at the Met Breuer until September 29.

A written guide to each of the 57 fiber, ceramic, and bronze sculptures follows the development of the artist's work over four decades. Each sculpture is named in Sanskrit and translations that allude to the imagery and inspiration, and sometimes include elaborations on the piece.

Shanay Jhaveri, Assistant Curator of South Asian Art in The Met's Department of Modern and Contemporary Art, curated the exhibit. Mukherjee left written installation instructions, with the early fiber sculptures hanging on the wall, then off the wall, then suspended from the ceiling, and finally free-standing on the ground. She did not want her work to be seen on a pedestal.

Mukherjee didn’t make drawings or use a loom for weaving but rather built simple armatures. With an intuitive, labor-intensive approach knotting the fiber, similar to hemp and dyed in earth-toned colors, into structures inspired by nature. Her deep bond with nature, deeply influenced by her artist parents, is evident. Her monumental fiber creations do not represent particular plants but show her feeling about the growth and decay of living things.

She had an interest in Indian mythology. The Sanskrit titles of some of the sculptures identify them as personifications of deities and divinities. This is done with a modern and imaginative interpretation of the iconography found in temples and shrines. The forms of these fiber sculptures are unusual and mysterious. At times they suggest a sexual image and often make the viewer smile. Primarily, one marvels at their complexity and beauty.

After working with fiber for two decades Mukherjee began creating ceramic sculptures, followed by work in bronze. These pieces, smaller for the most part, again are unusual. They entail amorphous forms that suggest a response to forces of nature, growth and decay.

The last area of the exhibit contains pieces from the three stages of her artistic development, from fiber. to ceramic,  then bronze. Mukherjee did not view moving from one material to another as a rupture. It was a result of the availability of materials.  She felt a continuation of her exploration of natural materials, each time creating mysterious, powerful sculptures.