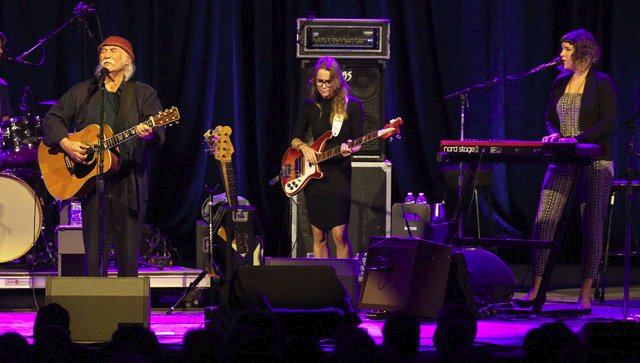 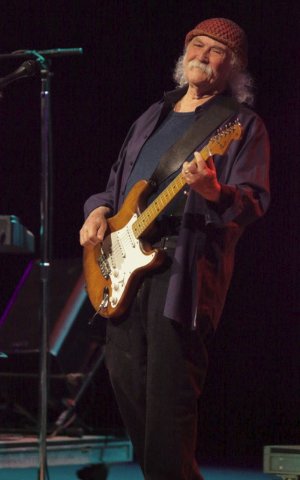 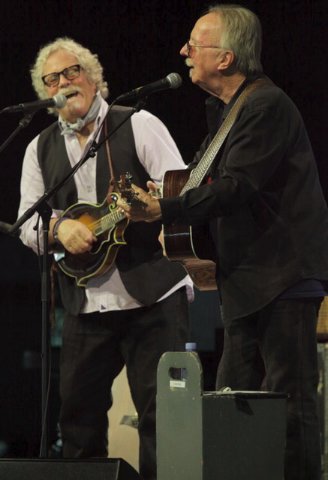 On Saturday night, Tanglewood offered a breathtaking evening of music.

Starting off with Chris Hillman, a founder of The Byrds, and Herb Peterson, one of The Dillards, this was a warm up to the lead in, Mary Chapin Carpenter.

Hillman and Peterson were accompanied by the  renowned guitarist, Jeff Pevar (who is part of David Crosby’s band). Both were in fine form after warming up.  Hillman offered a song from his new solo album, produced by Tom Petty, “Bidin’ My Time”. Petersen sang “Gone to the People” and “Wait a Minute.”

This short set, by these renowned musicians, was capped by a rendition of a Byrds classic  “Turn, Turn, Turn” bringing out David Crosby to join in. Of course, the crowd went wild!

After a brief intermission, Mary Chaplin Carpenter brought her band out with thanks for sharing the bill with Crosby, Hillman and Petersen.  Her voice is strong and smoky, and the band was totally in sync with her leads.  Her rendition of “This Shirt” was particularly poignant and strong.  Carpenter alluded to the use of many guitars, having tuned them off stage.  Before she sang it, Carpenter told a story of wanting to include Superman on an album and having to find it on the internet, where, she said, “everything winds up.”

“Feel Lucky” and “Sometimes Just the Sky” were soulful and beautifully rendered. Carpenter has been performing for over thirty years. Her songs have stood the test of time, and she continues to perform  with power and emotion.

Speaking of standing the test of time Crosby, at 76, was in amazingly great shape as the headliner last night.  In addition to being a singer-song writer and guitarist, Crosby was a founding member of The Byrds and Crosby, Stills & Nash. He is a two-time Rock and Roll Hall of Farmer, and is still in perfect voice.

Crosby’s touring band is stellar, led by his son and sometime co-writer James Raymond and guitar ringer Jeff Pevar. Early on, he gave kudos to them both, and to the other members of this exceptional back-up band.  Included were ace drummer Steve DiStanislao (once stolen from Crosby by his friend David Gilmour), a young bassist from Stockholm, Mai Alan, with a very fluid touch.  Crosby’s keyboardist Michelle Willis, was exceptional and the band did one of her songs.  She is also a lovely singer.  As Crosby pointed out, each band member is part of their own bands.

Crosby opened with “In My Dreams” a great rendition of this CSN song. The concert was full of stories regarding the songs and Crosby’s life. Introducing Morrison, the first co-write between Crosby and his son, he described seeing the Doors at Whisky A Go Go.

An interesting and surprising comment Crosby made was that he was nervous because Tanglewood’s audience was larger than most places they play. Who would have thought that?

Next up was Willis’ “Janet” a great song with her strong voice and Crosby chiming in. It is really worth following Willis from this song and her playing.

Crosby’s rendition of “Guinevere” and “Homeward” were beautiful.  Crosby alluded to his life as a junkie and how lucky he is to be around.  His declaration of his “old fashioned” patriotism was demonstrated in his singing of “My Country, ‘Tis of Thee” which is not a popular rock concert song!  His description of the US going through a hard time and our needing to love her a little bit was his leadin to this anthem.

The concert ended with a dramatic “Wooden Ships” followed by a roaring version of “Ohio” that had Crosby and the crowd shouting “four dead in Ohio” and “how many more,” lyrics still so relevant after all these years.

All in all, Tanglewood provided the audience with a rich and magical musical evening that will long be remembered.