Rapping with Artists on Zoom 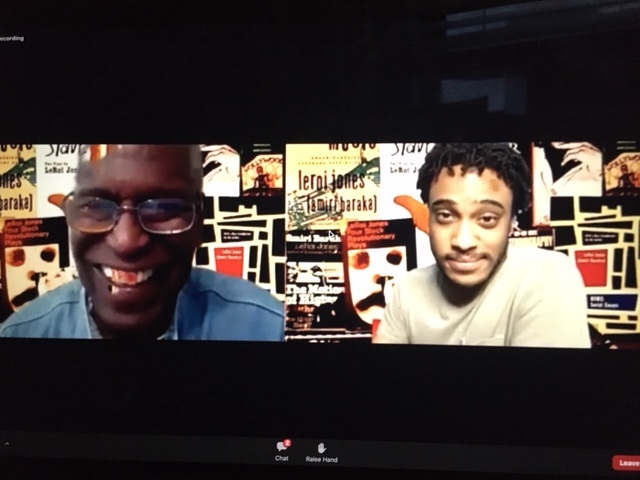 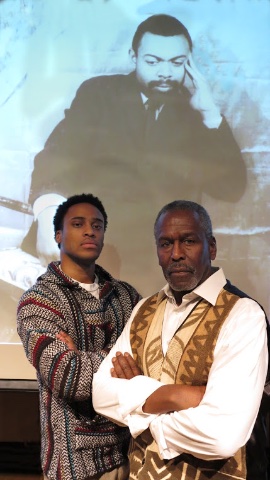 Tyler Fauntleroy and Kim Sullivan in the shadow of Leroy Jones. 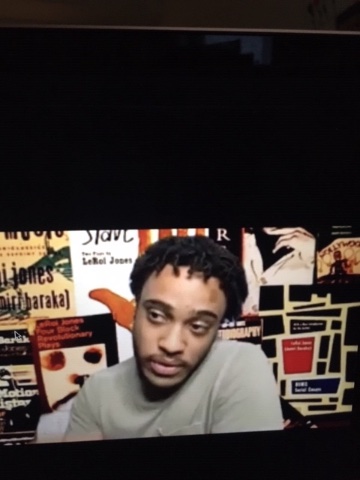 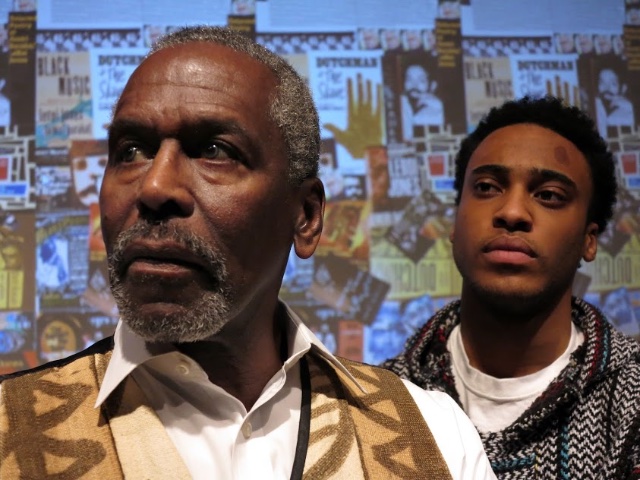 Looking for Leroy focuses on the celebrated poet-playwright-activist Amiri Baraka,(1934-2014), known earlier in his career as LeRoi Jones. He is at work on his final play, “The Most Dangerous Man in America” (about W.E.B. DuBois) as he is joined by Taj, his newly hired young intern. The two explore and speak to what is Black theatre as defined by whom, and the fundamental nature of aesthetics. Their discussion soon provokes an infuriating debate.

Buzz about town concerns how to get black voices heard.  How can venues, traditionally black and mainstream add meaningful insights into black culture.  Must black culture be integrated into the mainstream, or should we look to unique voices and identities to help us not only understand but feel our neighbors and come to a new and more satisfactory community.

For fifty years King has mounted superb theater. He first introduced Morgan Freeman, Denzel Washington, Wesley Snipes and in the recent past J. Alphonse Nicholson and Tyler Fauntleroy, names you will not be able to miss. Now he is focused on revealing Identity, particularly black people's identity.  Langston Hughes asked, "When will I see me in my blackness and my beauty?"   King wants to mount black Somebody-ness on the national stage.

In the set-up rap to a Zoom reading of Larry Muhammed’s Looking for Leroy, King discussed the presentation of black identity with the playright, the director Petronia Paley.  Years as a soap star have served the director well.  She is not a woman of many words, but she has succeeded in producing one of the very best Zoom plays.

The play is a two-hander, performed by Kim Sullivan and Tyler Fauntleroy, both masters of their craft.  Their backgrounds in rooms miles apart were identical theater bills. The fourth wall, or the lines parallel in their adjoining screens, was broken by flying papers and an occasional fist.  Both actors adapted well to the zoom cameras.  You felt their presence as immediate.

The topic of the play is very much of our times.  Jones was a leading voice of the black theater and black politics as long as he was alive.

Playwright Muhammed imagines that he has hired a new, non-paid intern to work with him on his final play. W.E.B.DuBois is the subject.  The play within the play that is being written is 400 pages long at the start and whittled down to less than 90 by the end.

In the end, the two actors wrestle with notions of theater as politics, and polemic substituted for character development. The dialogue makes for riveting drama.

An over-arching idea concerns black identity.  First comes the American origins in slavery.  Then the effects of emancipation, and Jim Crow.  Always we sense that the black man is misunderstood.  What we deeply understand is that he has been treated so badly by white society that at times revolution or exodus to Liberia seem the polar opposite answers.

Muhammed has a gift for characterization in language.  He can suggest deep ideas without overburdening them.  He can loft humor and good-natured jostling, as an older, very successful man deals with his legacy and a young man, respectful but honest, shows how that legacy can be brought forward to the future.

Jones/Baraka beliefs that Black American artists should follow “black,” not “white” standards of beauty and value, and should stop looking to white culture for validation are very much on people’s minds today.  The black artist’s role, he wrote in Home: Social Essays (1966), is to “aid in the destruction of America as he knows it.” Foremost in this endeavor was the imperative to portray society and its ills faithfully so that the portrayal would move people to take necessary corrective action.

These discussions and readings with Woodie King Jr. are always provocative.  They are extremely relevant at this moment.

June 30 at 3:00 PM:
RAPPING WITH THE ARTISTS
André DeShields and Chuck Smith rap about creating theater centered around historical figures.

All events are free but registration is required and donations will be gratefully accepted.  To register, send an email to: nftvirtualprograms@gmail.com.